0 Words and numbers: The importance of Stimpmeter readings and putting green speeds 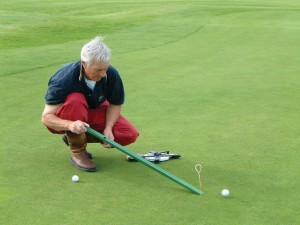 In a 1937 issue of Golfdom, Edward (Eddie) Stimpson wrote an article introducing the "Stimpmeter." An editorial note appeared just prior to the article that was somewhat dismissive of the use of the instrument, but said, "… there may be something to the device as an instrument for green keepers who might want to answer arguments about the speed and uniformity of their greens."

Edward Stimpson, an accomplished amateur golfer from Massachusetts would, over the following decades, use his Stimpmeter to measure the speeds of putting greens, primarily in the New England area. His instrument never really caught on with the golfing public, which was left to its own imagination and words to describe putting green speed. They used words like blistering, slick, ice, red-hot and supersonic to describe putting green speeds of the day. If they needed slow terms in the same sentence as speed, they would include "bristle brush," "mattress," "mallet," "lame," and my favourite, "shocking" (which can reflect both fast and slow.)

That all changed in 1976 with the release of the USGA Stimpmeter. Now, golfers consider knowing putting green speed (the Stimpmeter reading) the most important thing to know about a course. Golfers are no different than other sports fans or players; we like to quantify an effect with a number. However, a number that stands by itself does not resonate; it allows little to the imagination.

Baseball, a sport driven by numbers and statistics, uses a radar gun to quantify the velocity at which pitchers throw. Bob Gibson was a pitcher for the St. Louis Cardinals in the 1960s and was the most feared pitcher of his time. When columnists and baseball fans described Gibson's pitching, they used words like "jaw-breaking," "knee-buckling," "smoke," "mean," etc. It was left up to the imagination of the baseball fan to determine how fast and mean Gibson was. Now it's common to describe pitchers as those who can throw or not throw a 95-mph fastball.

I don't know how fast Gibson could pitch, but hearing one of his pitches described as a "nasty slider" sounds much cooler than "84 mph."

In some golfing circles, discussion exists about whether Stimpmeter readings should or should not be made available to golfers. Given the number of talks and articles written on both the pros and cons, I can see both sides. However, if I am forced to give an opinion, and putting green speed is of the greatest interest to golfers in general, I want to communicate the reading in some fashion.

It's clear in Stimpson's Golfdom article that the editor did not believe that measuring green speed would catch on, and it would be too complicated for the golfer. But, if you turn to the second page of the article and see the excitement for the golfers in the photograph watching Edward Stimpson demonstrate his Stimpmeter, I think you can see how golfers would come to embrace it. The reading enhances the anticipation a golfer has toward the upcoming round.

However, based on the premise of my Bob Gibson story, I want to see more than just a number posted. Why not add a few descriptive words? 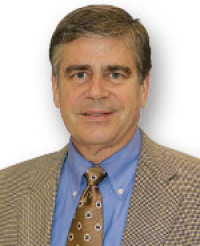 We should present a Stimpmeter reading in a context that gives golfers more of a sense of anticipation, and include some creative wording that provides what a plain cold number does not. Maybe too, it might relieve some of the pressure on superintendents to deliver a number that is not sustainable for a golf course.

Dr Karl Danneberger is a Full Professor at the Department of Horticulture and Crop Science, The Ohio State University