The North West of England is home to five top flight teams. But what is life like for the region's lower league groundsmen who can only dream of the extensive budgets available to their lofty neighbours? Lee Williams visits four such clubs to find out; in the third article, Lee chats to Chester Football Club Head Groundsman, Michael Barrow, about life at the Deva Stadium.

Chester Football Club are currently members of the Vanarama National League North, the sixth tier of English football. The club was founded in 2010 following the winding-up of Chester City. In its inaugural season, it competed in Division One North of the Northern Premier League, following a successful appeal to the Football Association against its initial placement in the North West Counties League.

After winning this division, it then won the Northern League Premier Division in 2011-12 and the Conference North in 2012-13.

The Deva Stadium - also currently known as the Swansway Chester Stadium for sponsorship reasons - is the home of Chester FC. The name Deva comes from the original Roman name for the fort Deva Victrix, which became the city of Chester. The stadium has a capacity of 5,376 (4,170 seated). It sits on the border between England and Wales; the border running alongside the rear of the east (main) stand. The address of the ground is officially classed as England, due to the main entrance of the building being in England.

Tucked away at the back of a large retail park, I turn into the stadium car park, where Head Groundsman Michael Barrow is waiting to meet me. Once signed in, he takes me through the stand and onto the pitch via the players' tunnel. We only manage to have a brief look at the pitch as the first team are setting up for a training session before they travel to Brackley FC that evening, so we head off to the groundsman's shed for a chat.

Michael is a life-long supporter of the club and has always had an interest in football groundsmanship. His career started out at the MBNA Business Park on the outskirts of the city, where he used to look after a small 3G artificial pitch, a full-size grass pitch and a running track. Chester FC had used the facilities in the past to train. 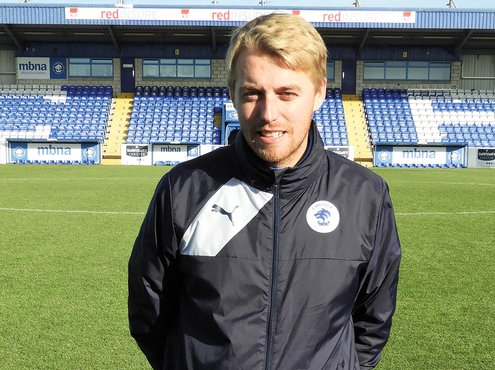 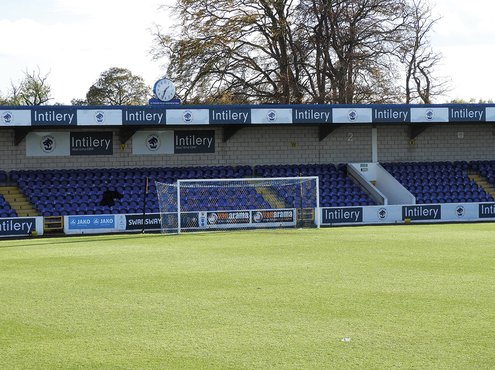 Mike explains, "I was approached at a Chester away game about applying for the job as Head Groundsman. The club decided to give me the job even though I was new to it. They could have given the job to someone else with more experience, but I'm grateful they chose me as I am a lifelong fan." He started his new role in December 2015, where his first game was against Torquay United.

"My partner was due with Isaac, so I had a divot fork in one hand and a phone in the other. Luckily, Isaac arrived the next day."

Mike gained his spraying certificates whilst studying for an NVQ in Landscape at Reaseheath College, and he now wants to start working towards an NVQ Level 2 in Sportsturf as soon as time allows.

Michael works on his own, looking after the stadium pitch on a day to day basis, but is grateful to the volunteers who help on match days, no matter what the weather. They also get a good response when they put a shout out on the website to help remove the eighteen frost covers.

"Last year, we got some freak weather that came out of the blue when we played Solihull in December. No snow was forecast. Then, the day of the game, I woke up and it was horrendous. Three of us attempted to move the snow off the pitch until 11.00am, but it just kept coming down, so we put a shout out on the website. By one o'clock, there must have been fifty people, brushing, shovelling and generally getting stuck in and, by 2.30pm, it was all clear."

The pitch is a rootzone construction with a pop-up irrigation system with twelve sprinklers around the edge and six in the playing surface. Shade is a big problem under the west stand as it takes out a strip from the 18-yard line to the touchline all the way down the pitch. "We suffer from the shade for twelve months of the year, even in summer after renovation; the seed struggles to germinate down that side."

When I walked on the pitch, I could still see the seed lines from the disc seeder. I asked Michael what renovation he carried out in the summer and, like many groundsmen around the country, how he had coped with the summer heat?

"It was very testing conditions with a very hot summer and a four-week window until we played Liverpool. We just went with the fraise mow this time, and disc seeded it with eighteen bags of seed four ways."

"The irrigation system was used as much as possible to give me a fighting chance to get the seed germinating, and I had to hand water some areas around the pitch where the sprinklers didn't seem to reach. But I managed to get the pitch ready in time for the Liverpool game." 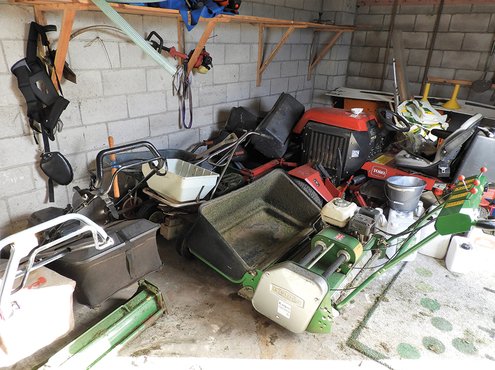 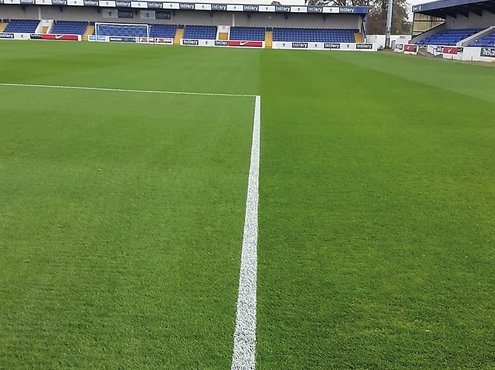 Michael must adapt his maintenance regime around a busy schedule of games and training sessions each month. For example, in October, he had six games with the first team, youth team and an England Under 19s game, plus eight training sessions.

"Every morning I like to check the G860's blades are on cut. The height of cut is set at 28mm which helps give a bit of protection. I will then cut the pitch for a game or training session, then swap the unit around for the brush attachment and clean up any debris from the pitch."

When possible, he likes to get the slitter and solid tiner on the pitch. Michael is about to sign a deal with a contractor to vert-drain the pitch five times a year. "The roots are currently at a depth of three inches, and I hope the verti-drain will improve on this in the future," he comments.

Soil tests have been taken from the pitch, and they came back with no significant deficiencies. Michael tells me he has no real budget when it comes to fertilising the pitch. "I haven't got a set amount, I could go in the office and ask for a few hundred pounds but, depending on results and the income coming in, this can be a struggle. The club does try to support me the best they can though. When money is available, I have been using organic granular fertilisers with liquid seaweed and chelated iron products."

The club is doing well at present, lying sixth in the league and unbeaten at home at the time of writing. Michael has his fingers crossed that they can continue with this run of form all season and get themselves promoted, or at least be in the mix. This would help bring in extra revenue for next season. Ideally, he would like to koro off the pitch before next season, but this will all depend on the funds available at the time.

Michael believes more and more pressure is being put on groundsmen in the lower tiers of football, with fans watching top flight football on TV and expecting their teams' pitches to look the same.

"Fans have got to realise we don't have the funds available to provide a similar surface, but we do our best with what we have. We try and provide the best surface possible, day in day out. People have got to look back at pitches of the past and appreciate that they have improved dramatically since then; we have some great quality surfaces now in non-league football."