0 A week in the life of Gloucester Rugby Club 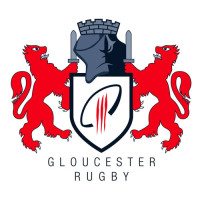 This is a look into the workings of Gloucester Rugby's Stadium & Operations department. Our responsibilities cover a range of aspects in the running of a Sports Stadium within the world of Rugby Union. There are eight members of staff here at Kingsholm that are responsible for the running of the whole stadium, 3 of which are full time and the other five are part time, which includes cleaners and general maintenance staff.

Due to the impacts that are put on players' bodies we normally end up with a one week on/one week off schedule, which allows us to maintain the stadium/pitch a lot easier.

The week begins at 8am with a small staff meeting to go through anything that may have cropped up over the weekend, such as updated fixtures due to progression in cup competitions. We also get informed of special requirements that need to be met for respective competitions. As I have a dual role at the club (Head Groundsman & Deputy IT/Telecommunications Manager), I have to ensure that our IT system is ready for another week and that the Ticket Office can cope with the heavy demands put upon it by the prospect of a fixture selling out before they close on a Friday evening. 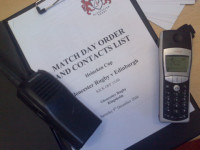 As Head Groundsman I need to make sure that what I need to do to the pitch is possible with the weather that might be coming in. We have a number of sources that we take forecasts from, including the PITCHCARE.COM weather updates that are emailed to me on a daily basis. We also have a contract with Sports and Stadia Services that offers us a frost protection system should we feel that our own covers would not be sufficient to stage the upcoming fixture.

Once myself and Dave Balmer (Stadium Manager) have looked at the week's forecast and established a programme of work for the week we will look at carrying that schedule out. Firstly, we would look at deep aerating the pitch with our Wiedenmann Terra-Spike to a depth of anything between 7-10 inches (175mm-250mm) with 20mm diameter tines set with little or no heave. Depending on the tine spacing this job can take as little as 3 hours or as much as 9½ hours to complete. Therefore, not much else would happen on the pitch, so the other members of the department focus on maintaining the rest of the Stadium, repairing seats in the stands and other work depending on what needs doing. 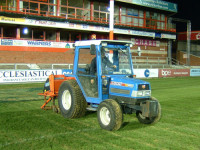 Today I would look to finish off the verti-draining that was started yesterday, and once that work has been carried out I would look to brush the pitch using an 8ft SISIS brush on a 'Singleplay' frame. Once this has been completed, I would then look to start on setting up the stripes that I would use for the weekend. How I would do this entirely depends on how I feel at the time I get on the mower.

We are currently using a Jacobsen T-Plex 185d triple mower set at 38mm, returning the clippings back to the pitch. Towards the back end of the year, I look at setting it up to about 45mm for the winter to allow the pitch a little more strength through the colder months.

Depending on the type of pattern that I choose, depends on how long I spend mowing. If it is a simple straight up and down, I will only be on the mower for around 2 hours, but if it is a more complex pattern, I could spend a whole day setting it out and then turning it into a work of art.
Wednesday:

First of all I check the weather for the next three days, as it will have a serious bearing on what we do today. Normally a Wednesday would provide me with the time to set out our 4 logos that go in the deadball area. The first thing we do is set out the location using templates, and then spray the outlines onto the turf using aerosol based paints.

Once this has been completed, we leave the logos and then nip to one of the local schools that used to be used as a training ground, to mark out the pitches for the weekend's fixtures. At the school there are 2 football pitches and 2 rugby union pitches to mark in the winter months (September through to the Easter half-term) and then we have to mark a 6 lane 200m running track, 4 rounders pitches, 2 cricket boundaries and 2 softball diamonds.

Once that has been completed, I would look to mowing the pitch again for the weekend's fixture following the pattern that I set up on Tuesday.

During some point on a Wednesday, we usually have a management meeting to go through the running order for the upcoming fixture to clarify what is happening on the Matchday.
Thursday: Today is usually the day that we have companies come to the stadium to set up the perimeter boards and deliver any branding that needs to comply with the competition that we are playing in at the weekend. This would include Tournament sponsor's logo that may be applied onto the centre of the playing surface. This is done by specialist contractors using a combination of aerosols, standard marking fluids and removable paints. Depending on the size and complexity of the logo and the paints used, makes a difference to whether I mow before or after it has been applied. Normally, I look to get in a bit earlier and mow the areas involved before the contractors arrive.

48 hours before kick off we, as a department, look to test-run the systems that get used on matchday. Therefore we do a 45 minute test of the floodlights, scoreboards and the official timeclock. We also test the public address system and all associated fallback systems, such as UPS systems.

Our last job on a Thursday is to ensure that the lines are visible enough for the Captain's Run that will take place tomorrow. The Captain's Run is the name given to the first team's training session on the pitch.
Friday: If the game is to be shown live on TV, rigging will commence today. After myself or Dave have supervised the parking of the OB Units into the OB parking area, we ensure that the post protectors have been put out and the kicking nets have been put up. During the the 2-3 hour Captain's Run that takes place, Dave meets with the Sky/BBC OB unit manager whilst I meet with the IT Manager to go through any developments that have happened since our meeting last week. This time is important as it allows me to administer the IT infrastructure that the IT Manager and myself designed and implemented during the summer.

Again during the Captain's Run we test the floodlights/scoreboards and official timeclocks, this time for the duration of the training session. Once the players have completed the Captain's Run, I again mow the pitch in the same way that I have done so during the week. Once this has been completed, we finish off the pitch branding in the deadball areas, using a combination of aerosol based paint and linemarking fluid through a Fleet Kombi spray marker.

Our final job is to double mark the pitch using the spray marker set at 4 inches (100mm). This ensures that the lines are bright enough for the TV cameras to pick up, the TV gantry faces south and therefore the sun glares right into the camera's lenses.

Below is a brief extract of timings and events taken from our Matchday Operations Schedule.

This is a brief outline of what happens on a matchday and, although it may not look a lot, people that are involved with running a sports stadium will appreciate that it isn't as easy as to seems; a lot of meticulous planning is involved by a number of people to get each game past the kick off.

As you may have noticed, we do not carry out any half time divoting to the pitch. This is because myself and Dave are responsible for responding to problems that arise within the stadium, such as electrical supply failures and maintenance issues.