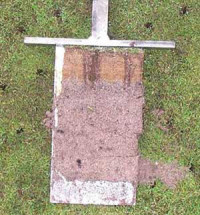 The term black layer is commonly used among sportsturf managers. This problem is an anaerobic condition that can develop in rootzones due to a number of environmental and cultural factors. This condition is more common on sand based rootzones, although it can also occur on other rootzone types.

Black layer appears as a black, foul-smelling continuous or discontinuous subsurface layer in turfgrass rootzones. Chemically, black layer is a deposit of metal sulphides, which form when hydrogen sulphide gas reacts with metal elements in the soil. For hydrogen sulphide to be released, the rootzone conditions must favour the growth of sulphur reducing bacteria, which requires water and soil organic matter.

The organic matter provides the food for the microbes, and water keeps the microbes hydrated. Soils must be relatively anaerobic (low in air) since these sulphur reducing bacteria do not survive very well in well aerated soils. The anaerobic conditions can be caused by numerous factors such as compaction, excessive irrigation, organic matter accumulation, thatch build up, sulphur application or movement of colloidal particles. Coupled with this, sulphur must be available within the soil. The growth of algae is favored by wet soils. Algae can produce substances that interfere with the movement of water in sandy mixtures, consequently reducing water movement, causing an anaerobic soil.

Soils with low levels of oxygen are usually darker in colour than well oxygenated rootzones. If black layer is present, particularly on a sandy soil, a dark coloured ring will form in the rootzone below the soil surface, which can range from less than an inch to several inches in thickness. Areas of turf may turn a bronze colour and thinning of the grass is likely.

The most important measure with black layer is prevention by ensuring that the soil is well aerated and drains freely. This can be achieved through numerous techniques including

Research at Michigan State University, found that when elemental sulphur was applied, large quantities of sulphides formed. It is critical to remember that if sulphur molecules are not present in the soil, then the sulphur reducing bacteria which are causing the problem cannot survive, which should eliminate the production of hydrogen sulphide gas.

The use of nitrate based fertilisers has shown some use in reducing the likelihood of hydrogen sulphide formation. The results of nitrate applications however are temporary due to nitrification and thus light frequent fertilisation is suggested.

Tim Butler is studying for a Ph.D degree in Turfgrass Science at both University College Dublin, Ireland and Michigan State University, U.S.A. Contact Tim at timmbutler@hotmail.com