Cardiff City Football Club are the only team from outside England to win the FA Cup, doing so in 1927. They have also been finalists on two other occasions and have spent a total of eighteen years in the top flight of English football, most recently in the current season, since their formation as Riverside AFC in 1899. They have also won the Welsh Cup on twenty-two occasions, making them the second most successful team in the competition's history behind Wrexham. 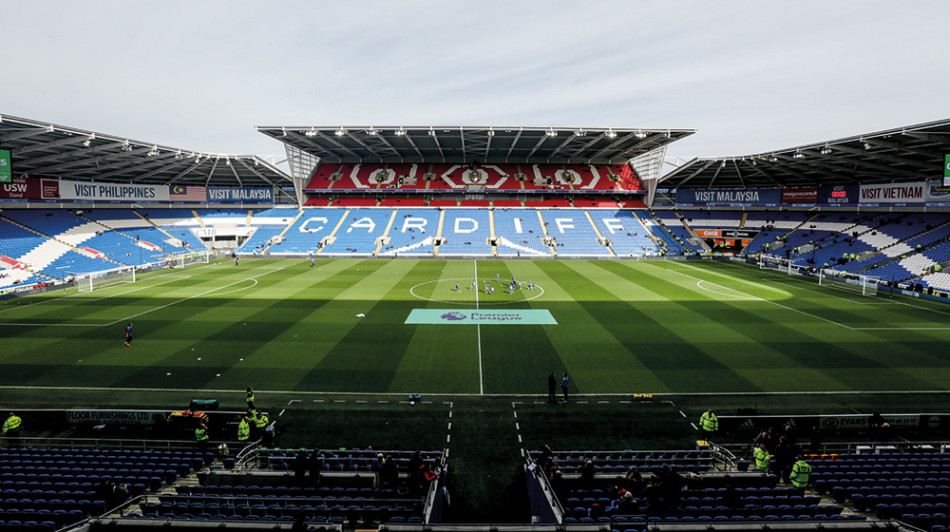 On a cold but pleasant Monday afternoon at the end of January, Lee Williams met with Liam James, the club's new Head Groundsman.

Since 1908, when the club changed its name to Cardiff City, and except for a period between 2012 and 2015 when the owner, Vincent Tan, rebranded the club and changed the home colours to red, they have played in blue and white, leading to the nickname "The Bluebirds" (they reverted to their traditional blue in January 2015).

They play their home games at the 33,316 capacity Cardiff City Stadium after moving from Ninian Park in 2009, and have long-standing rivalries with nearby clubs Swansea City, known as the South Wales derby, and Bristol City, known as the Severnside derby.

After meeting Liam outside the groundsman's entrance at the stadium, I am taken onto the pitch, which was in immaculate condition for this time of year. Liam was three quarters the way through cutting with the Allett Buffalo, working his way around the SGL lighting rigs. We then sat down in his office, over a coffee, to discuss his journey so far as a groundsman at Cardiff City.

Since joining the club eleven years ago, Liam has worked his way through the ranks, and was rewarded with a promotion to Head Groundsman last year after Phil Williams retired from the role. 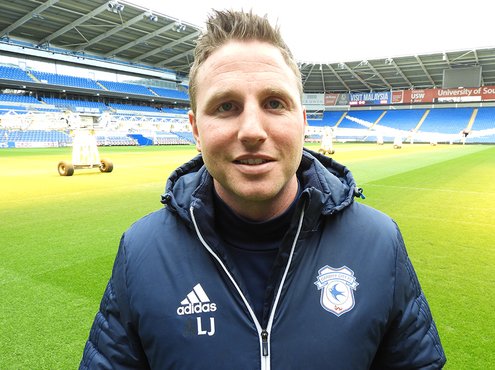 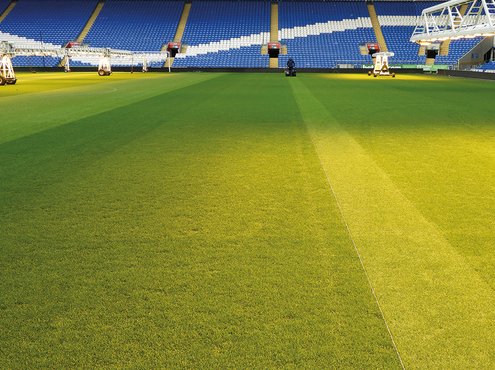 "I first got involved with the club working matchdays at Ninian Park as a volunteer. At the age of eighteen, I was given the opportunity to join the club on a part-time basis looking after the under eighteen and twenty-three pitches just over the road from here. This eventually led to a full-time role as an assistant groundsman. I was then moved over to the main stadium and put on my NVQ Level 2 in Sportsturf at Pencoed College. Once I completed my Level 2, I decided to have a gap year before starting an NVQ Level 3 in Sportsturf; I also have my PA1, 2 and 6 spraying certificates. From the stadium, I moved to the training ground where I helped oversee all the work carried out installing a Desso GrassMaster pitch, which our first team now use three to four times a week depending on the weather. We also get all the Welsh national teams training at our facilities. The start of this season has seen me taking the Head Groundsman position at the stadium, which is a dream come true for me being a Cardiff City fan."

In 2016, Liam went out to France with the Welsh national team working at the training ground in Dinard for Euro 2016, which he tells me was a great experience and it was a proud moment in his career thus far.

The stadium also hosts the Welsh national side, who have just signed another two-year lease extension to hold all their home qualifying games.

The stadium pitch is a thirteen-year-old Desso GrassMaster with a fully automated Hunter irrigation system, undersoil heating and a 3G surround. To help with shading from the end of August up until March - which takes out three-quarters of the pitch through the winter - Liam has the addition of four SGL 1000 watt MU360s and four SGL MU50s, and they also had an SGL LU440 on trial for a month. "I would like two more MU360s which would give me six. I could then turn them widthways so, in two moves, I could cover the whole of the pitch, whereas now, with the four, it takes five movements. If we stay up (Cardiff were in the relegation zone at the time of writing), I would like to think we have a chance; fingers crossed."

Liam talks me through his maintenance regime throughout the season. "In the summer, we cut twice a day with our Allett Buffalo 34s - at 25mm for Cardiff City and at 22mm for Wales as the manager, Ryan Giggs, likes us to cut it a little lower. In winter, I like to stay off it as much as I can, so I do a lot of rotary mowing at the start of the week and then double cut the day before a game and on the day of the game. We will rotary, divot and put the lights back on after the match has concluded and let it rest. In between, we will aerate the pitch as much as we can but, with having around sixty games a year, I tend to work around the weather. If we have a lot of rain coming, I will use the Terra Spike at a depth of six inches; if we have little bits of rain coming, we'll use the Toro ProCore at a depth of four inches. We don't currently scarify the pitch through the season, but Wayne and I have been looking at investing in a Raycam Unirake next season for the summer months. This would enable us to clean it out a bit more so that, going into the winter, it's a bit cleaner. We have overseeded the pitch once so far this season with five bags of Johnsons J4 Turf." 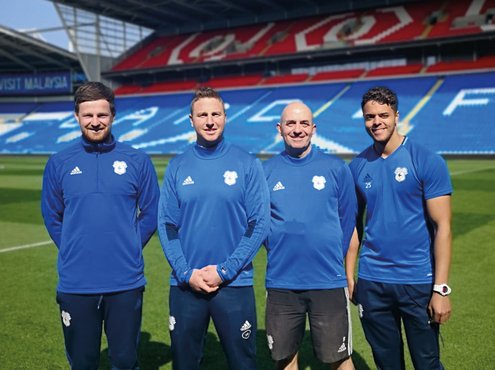 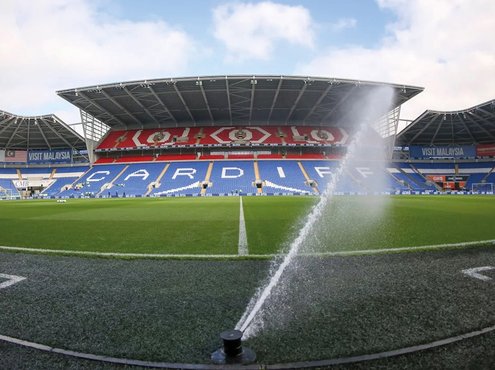 Liam works alongside Mark Atkins of Evolution Agronomics Ltd who provides agronomic advice for the stadium pitch. "Mark takes soil samples every two months and, based on results, he puts a fertiliser programme together to suit our pitch. Mark's advice, combined with having the new Terra Spike this season, has seen us get some great results this year with our rooting. We got them down to four inches in the summer and, currently, they are at three and a half inches, which is good for a Desso pitch."

It was a difficult start to the season for Liam and his team as the pitch suffered from a severe attack of fusarium. "It was a strange summer, as we all experienced. The boys and I came in after a weekend and the pitch was rife with it. So we had to spray the pitch straight away with Banner Maxx and Heritage as a mix; we ended up applying these three times before the fusarium started to clear up. We then overseeded to get the areas back that had been hit quite hard."

I asked Liam what he put this bout of fusarium down to. "I asked Nick Martin from ICL, and Mark Atkins, and they both said the same thing; it's down to the high temperatures. You have to use so much water on a Desso pitch. If we were watering, it was scorching and, if we weren't, it was burning. It was quite a tough summer, to be honest, but we got through in the end."

Last year, the stadium held a Stereophonics concert, plus corporate games at the end of the season, giving Liam the challenge of working his renovations around the events. "At the end of the season, we had around five corporate games, then the contractors - Hewitt Sportsturf - came in and shaved the top off the pitch using a Koro with a hybrid reel, before the boards were laid on the pitch and the stage built for the concert. Once these were removed three days later, they then came back in, fluffed the pitch up, verti-drained, overseeded using a dimple seeder in five directions with twenty bags of Limagrain MM60 grass seed, topdressed with 90 tonnes of sand, which was then brushed in, and finally a 20:10:10 pre-seed fertiliser was applied. I find the concert compacts the pitch quite a lot, so I was using the ProCore quite a lot at the beginning of the season to try and rectify that."

Most of Liam's machinery is purchased outright through local dealers. "We like to be loyal to our local dealers, so the cutting machinery is purchased outright through Keith Morgan Mowers, and we use Ted Hopkins Machinery who provide the Toro ProCore and the two buggies through a sponsorship deal with the club. Both companies carry out the annual servicing on various machines, and we set our own heights of cut etc."

Liam tells me they are hoping to get a new training ground soon, but they are just waiting for the green light from the owner.

Finally, I asked Liam what his thoughts on the industry are. "I believe it's getting better, from when I first started the pitches are improving overall with new products and machines coming into the market each year." 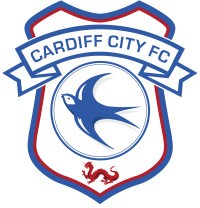