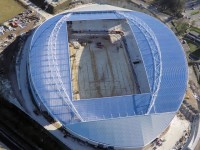 "The AMEX site spans two different district councils, so it was imperative both were happy with the final design and location of the ground before any work could begin"

This season, Brighton and Hove Albion Football Club returned to the Championship after an absence of five years. To coincide with this return, the club has unveiled its brand new stadium, The American Express Community Stadium, now firmly established as the Amex Stadium.

"Since leaving the Goldstone Ground in 1997, the club has not had a stadium it can call home," explains Steve Winterburn, Head Groundsman at Brighton and Hove Albion. "We were obviously very grateful to Gillingham for their hospitality, and for the use of the Withdean Stadium, but it has not been an ideal situation, especially as the Withdean was originally built for mainly athletics events."

The club first applied for planning permission for the new stadium back in 1999 but, because of opposition to the proposed location from local residents and district councils, it took another ten years before work was able to begin. 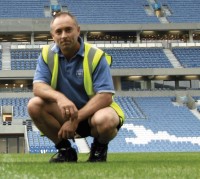 "The Amex Community Stadium site spans two different district councils - Lewes and Brighton and Hove - so it was imperative both were happy with the final design and location of the ground before any work could begin, which took a bit longer than we expected," continues Steve.

However, even before the new stadium started to take shape, Steve began his research into the most important element of any stadium, the pitch.

"Overall, I did around three to four years of research into the various products, technologies and techniques on the market, to ensure we had the best possible pitch right from the start. The weather here on the south coast can be very changeable, and the environment for the new pitch was predicted to be extremely harsh, so we needed a surface that could withstand these severe conditions as well as the hectic schedule of the Championship," says Steve.

"I travelled around the UK visiting clubs to observe how their pitches performed season-on-season in terms of sustainability, reliability and, most importantly, playability. My visit to Glasgow Rangers proved particularly interesting. The weather conditions in Scotland can be extreme, so when Rangers came to install a new pitch, like us they required a surface that was suitable for the wellbeing of the players, yet resilient against the forces of nature." 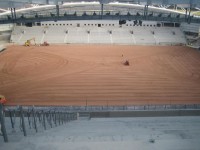 Rangers ultimately chose a Fibrelastic pitch for its Ibrox Stadium. Developed by Mansfield Sand, it is a totally natural turf which grows in a uniquely reinforced rootzone. The aim of its development has been to improve the characteristics of typical fibre reinforced sand dominant rootzones. This has been achieved by mixing silica sand, organic matter, rigid polypropylene fibres, and flexible elastane fibres to produce a completely homogeneous blend.

Work on the pitch began in January 2011 and was carried out by Kestrel Contractors. Working to exacting standards, and supported by pitch consultant Jonathan Smith of Geo Turf, the company rigorously tested every formation layer from the gravel up prior to seeding, as requested by the club, to ensure tight working tolerances were achieved. Although the pitch was built on a chalk foundation, an extensive pipe drainage system was also installed to ensure excess water was able to filter through the surface and be drained away quickly and effectively.

The company is one that Steve is familiar with, as it carried out the annual renovations at the Withdean Stadium on several occasions, and reconstructed a training pitch at the Sussex Universities Campus, where the club hires grass pitches as its current training facility. .

"We have worked with Kestrel on previous projects, and have also used Mansfield Sand products for a number of years," said Steve. "When choosing the type of pitch, we were confident they would provide us with the materials for the specification required. We are pleased with the quality of the pitch so far, and I am certain the team love playing on it, as much as we, the groundstaff, enjoy looking after it."

To ensure the pitch does not become too dry, it is fitted with a Rain Bird irrigation system. The eight in-field sprinklers and sixteen perimeter heads are able to water the entire pitch in forty-five minutes and can be remotely controlled, allowing Steve to maintain a healthy pitch, regardless of his location. It also has undersoil heating so play can continue, even in the coldest of weather. The sidelines, which will be used constantly by both referees assistants and players as they warm up, are made from artificial grass which will not wear or tear easily and will require only the minimum amount of upkeep.

To maintain the health of the pitch throughout the season, the club uses an electric Jacobsen Eclipse 322 triple mower, to help make looking after the pitch as effective and efficient as possible. They also carry out their own pesticide spraying, which is unusual, as most clubs outsource this due to

the restrictions and regulations surrounding the use of chemicals. However, Steve sees keeping this job in-house as a sound investment for the future.

"Although it takes a bit more work to keep up to date with legislations, and to ensure everyone using the sprayer is licensed, it is definitely worth it for the time and money the club saves on contractors."

"Overall, the stadium project has been a great success and. once again. the Seagulls have a stadium they can call home. We know the supporters, who have been very patient over the past few years, love the new stadium. All that is left now is to get on with the season and make our mark on the Championship, with the quality of our facilities, especially our pitch!" concludes Steve.