The manager and the board will probably have more capital proposals than they have cash to fund them; so, some methods are required for choosing the most appropriate ones ...

Part of a turfgrass manager's role is to propose one or more capital expenditure projects that would benefit the facility. These projects will then be proposed to the management board, typically as a part of the budgeting process. The manager and the board will probably have more capital proposals than they have cash to fund them; so, some methods are required for choosing the most appropriate ones, whether machinery, course improvements or clubhouse investment.

Some typical capital investment decisions facing the enterprise from time to time include:

1. Replace or repair/keep? As equipment or facilities become nearly "used up" the decision must be made about whether to repair them and use them longer or replace them with new items. Generally, the older these items are, the more costly the ongoing maintenance.

2. Purchase capital item A or B? When buying a new machine, the enterprise usually has a choice among different brands, sizes, performance characteristics etc. Whilst much of the decision can be based on technical differences, a major consideration has to be the economic differences between competing proposals.

3. Lease or buy? Sports facilities often have the option to either buy equipment or lease it. Differences in the economics of the two options should be considered.

4. Do it yourself or hire it out? Much maintenance and construction work can either be done by in-house staff or by outside contractors. Economic differences often can be the deciding factor.

These capital investment decisions occur occasionally throughout the year, rather than as daily operating decisions. Ideally, the manager anticipates these major changes and carefully plans for them.

There are several different methods of investment appraisal, however the three main ones are:
1. Payback
2. Annual return
3. Net Present Value

When evaluating investment appraisal methods it should be remembered that all methods rely on the accuracy of predicted net cash flows over the project lifetime, where net cash flow is the difference between the cash received and cash paid during the defined lifetime period. For example, installation of a drainage system should enable a golf course to be open for more days, bringing in extra revenue. When replacing old machinery the cash received is the savings on maintenance and repair costs.

We shall look at how to use the three investment appraisal methods by examining three options a golf club has for spending £40,000 available for improvements. The Course Manager would like to:

1. Replace a fairway mower with a new one
2. Upgrade the irrigation system
3. Install drainage

Each of these options are costing the club money through repair bills and loss of income. However, only one option can be chosen due to the cash restrictions.

1. Payback
Payback is a method that aims to estimate how long it will take for a project to start generating an income. It looks at the value of the initial investment compared to the projected net cash flow.

Having calculated the payback period it may be of interest to calculate the surplus cash generated during the project lifetime, after recouping the initial investment. This surplus cash could be from income generated e.g. from the purchase of golf buggies, or savings on costs e.g. when replacing old machinery.

Calculations from a forecasted maintenance schedule analysis show that, if an initial investment of £40,000 is made for Project A, the following net cash flows (savings in maintenance costs) will be generated:


The above figures are calculated by estimating the reduction in maintenance costs compared to keeping the course as it is.
To calculate the payback period of the £40,000 investment, total the net cash flow figures over consecutive years until the full investment is recouped (see table 1).

With this example the investment is fully recouped in just over 4 years, resulting in a total net cash flow, after payback, of £11,500 for the 5 year project.

Project B requires an initial investment of £40,000 and is forecast to yield the following net cash flow figures in water savings:
(See table 2)

With this project, the initial investment would not be recouped after 5 years. This does not preclude the project, as ongoing savings may be deemed worth pressing ahead.

Example 3 - drainage of three fairways that causes regular closure of the course during the winter and loss of green fees.

An initial investment of £40,000 into Project C will lead to the following net cash flows:
(See table 3)

Payback is the most frequently applied technique, which is used to screen out projects that would take too long to recoup the initial investment. A more accurate method of investment appraisal would then be used.

Table 4 shows how to evaluate the above projects using payback as the selection criterion. The cash inflows and outflows for each are shown.

The payback period can be of some use in screening the three proposals. Proposal A seems to be better than Proposal C - the shorter payback period is clearly better. Proposal B can be excluded outright - its initial cost exceeds future cash savings, so it does not pay for itself. Therefore, with payback, Proposal A is accepted.

This method has several shortcomings that limit its usefulness. First, the method does not consider the earnings that continue after the payback period is reached. Proposal C, for instance, has a total savings of £52,500 in comparison to the £51,500 total earnings of Proposal A. The slightly shorter payback of Proposal A may mislead the manager who relies solely on the payback approach to evaluating investments. Also, keep in mind that we are ignoring the time value of money of the cash savings for each proposal when using this payback approach.

Due to unpredictable fluctuations in returns over the life of a project, average return is often used as a slightly more accurate measure in investment appraisal. The total return (net cash flow) is averaged over the duration of the project.

The average annual return can also be converted into a percentage in relation to the value of the initial investment.

Both these figures can be used as a basis of comparison for different investment proposals. The average annual return percentage should initially be compared with the business's cost of capital (explained in Discounted Cash Flow).

Using the figures for Project A, which had an initial investment of £40,000:
(See table 5)

Using the figures for Project C with an initial investment of £40,000:
(See table 6)

Both Payback and Average return have a major drawback in that they ignore the 'time' factor, i.e. £1 received today is worth more than £1 received in one year's time.

The cost of capital is the sacrifice made by the business by investing in a project, this considers:
• Comparison with returns from investing the capital in an alternative way e.g. in a bank
• Interest on debts incurred to raise the funds to finance the project
• The time value of money 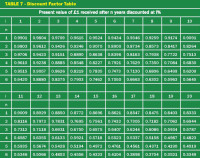 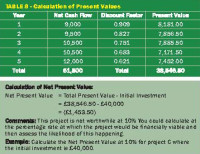 Example
Calculate the Net Present Value at 10% for project C where the initial investment is £40,000.


Comments: A non-profitable investment. Compare this result with the example for Project C using the Payback method to see the effect of discounting.

Capital budgeting focuses on the acquisition of facilities and equipment. The methods presented consider the cash flows related to the proposed project. First, there is the initial cash outflow, which is the cost of the investment. Second, there may be cash inflows and cash outflows or cash savings over the life of the investment.

The payback approach determines the number of years required for a project to pay for itself. This approach is best used for screening projects for further consideration using the net present value approach.

When considering a single proposal, if the net present value of a proposed investment is equal to zero or is positive, the investment should be made.