Nicknamed 'the Generals', Chesham United Football Club is a semi-professional football club in Buckinghamshire who play in the Southern League Premier Division South. The part-time groundsman is Craig Ringsell and we recently met him to discuss how he juggles his time between the club and his successful contracting business.

Craig set up Craig Ringsell Sports Pitches and Garden Services in 2008 and his hard work and dedication to what he does has definitely paid off. He now looks after thirteen cricket clubs based around Bedfordshire, Buckinghamshire and Hertfordshire, as well as Great Missenden Tennis Club, Dr Challoners Grammer School and Chesham United Football Club, where he has tended to the pitch for the last thirteen years. He has made some significant improvements in the playing surface with a limited budget to work with.

"When I first arrived, the pitch was bare with no grass cover to speak of and the goalmouths had drainage issues. Other than that, it was just in need of some good turf management techniques and seasonal renovation work."

"Over the years, the surface has been improved by incorporating many tonnes of rootzone but, in the last three years due to budget constraints, I have not been able to add to this when renovating. We have only been able to carry out basic renovations, which includes spreading sixty tonnes of sand, verti-drain and overseed. We do not need to scarify the pitch at the end of the season, as the number of games has significantly reduced the grass cover on the pitch." 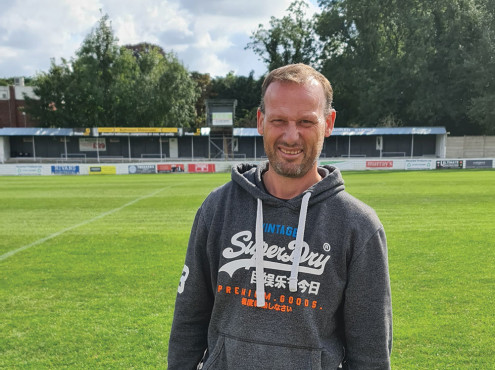 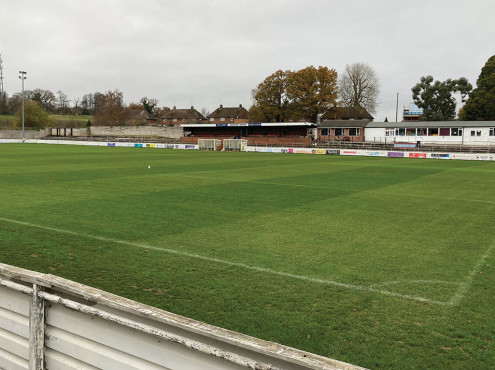 "The drainage is a funny one. When it's raining, if you lift up the manhole in the corner of the ground, there's hardly any water flowing. I do not know where the water goes, but it drains really well. The pitch was underwater a few times last year, but the water had drained away within a couple of hours. In all my years at the club, I don't recall ever having a game called off for a waterlogged pitch and, all in all, I have only lost around a dozen games due to snow and frost."

Irrigation for the pitch consists of two taps using the mains water and the pressure is pretty good. This enables Craig to run out two separate hoses and sprinklers to either end of the pitch, where he mainly covers the goal areas and centre circle in dry weather. "I would love a fully automatic irrigation system, but that is never going to happen on this site. However, that dream may come true when the club hopefully moves to a new ground."

"It's all up in the air at the minute, but the plan is to move to a new development about two miles away from here. The club is progressing rapidly with a ladies team, bundles of kids' teams and a groundshare agreement with Aylesbury Utd over the past three years. The club really wants two artificials, but I think they would invest in a hybrid pitch for the main stadium to start with. They have a budget where they need to play so many games to cover costs. Still, I feel a hybrid pitch is more environmentally friendly and other clubs around the country have shown that, if they are managed and renovated in the right way, they can accommodate over one hundred games per season."

"In the meantime, the maintenance programme for a typical week (in summer) would include clearing up on a Monday after the weekend's games. First, I will give it a divot followed by the Kubota G23 or the Dennis G860 with the verti-cut cassette, to clear up any debris. More often than not, we will have a game on a Tuesday night so, once the pitch is clean, I will cut with a Dennis G860 at 30mm - I will not go any lower than this due to the amount of use it gets. I would like to take it a little bit shorter, but there would be no grass on it at the end of the season."

"I spend a lot of time with the fork. Whenever possible, I like to be here for Chesham's home games and I will be out there divoting at the start, half time and at the end of the game for half an hour to put the worst damage back together. It is so important to divot and put it back straight away, that I can even find myself here early on Sunday mornings for a few hours."

"Presentation is important to me, so I will always measure out the shades at the beginning of the season and cut down the strings. If I get the time, I have been known to put a circular pattern in now and again to vary the cut. I try to use the cylinder mower as much as possible; it gives a better finish and a cleaner cut, but when I'm struggling for time or the pitch is being used heavily in the week, I will use the rotary mid-mounted deck on the Kubota." 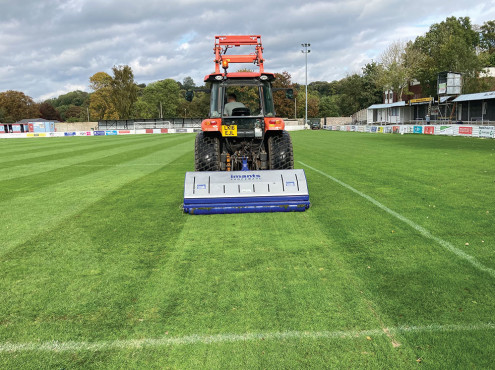 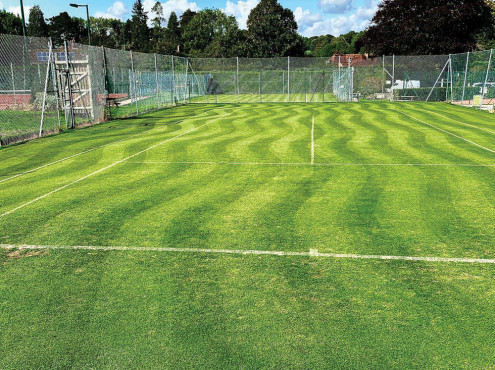 "I mark out once a week using the Fleet Kombi spray marker. At the beginning of this season, I was lucky enough to use a GPS line marker to come and initially mark in my pitch, which did a great job and saved me a considerable amount of time."

"My aeration programme includes a Verti-drain or an Imants Shockwave around four times a year to a depth of eight inches, depending on the weather and budget. I don't have my own aeration equipment, so I get a friend of mine who has a renovation contracts company to carry out this work for me on all the sites I look after."

Craig is fortunate enough that the pitch does not get affected much by pests and diseases. "They have had some big problems with leatherjackets at the local golf club down the road but, touch wood, we have not been troubled with them.

We do get the odd fox messing and digging the pitch up and a Muntjac now and again that likes to dig up the penalty spots at the same time each year. On the whole, we are pretty lucky."

Craig has his hands full with the Chesham pitch, as well as the many cricket squares and tennis courts he maintains. "I will prepare wickets fourteen days in advance starting on a Monday. I keep to the basics and I have tried to simplify the process to enable me to still provide a good quality playing surface; this enables me to get around all the grounds. Prep includes cutting, brushing and raking the wicket out. Some of the bigger clubs will then water for me the night before I come in and roll it on a Wednesday. Thursday, I go around the smaller village clubs and work on their wickets ready for the weekend. On a Saturday, I cut eight of the main grounds before their match that day. Finally, I go back in on a Sunday to cut and remark for the next game…. then it all starts again. Given the opportunity, I would love to work on a county ground for a week to pick up some new ideas which I could use to improve my knowledge further."

"The tennis courts have still got around 7mm of thatch, so I will verti-cut them at least once a month using the Dennis G860 and they are cut three times a week with the cylinder mower. During the summer, seaweed and iron is applied to keep them green and I feed when I can. I hire a Graden to deep scarify at the end of the season and carry out three passes before a tonne application of GOSTD loam per court and then overseed. In winter, I go over them once a month with a spiker." 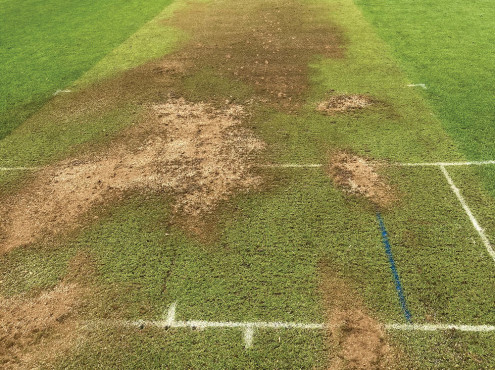 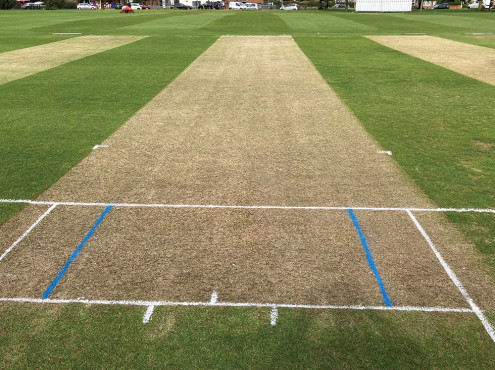 Before and after cricket square renovations

It's clear that Craig has an abundance of experience and knowledge and we were keen to hear how his career path formed. After leaving sixth form, he attended Aylesbury College to complete a Horticultural Course. At the same time, he got an apprenticeship position at a private hospital looking after the lawns and a small nine-hole golf course. Once he finished his college course, he joined Flackwell Heath Golf Club as an assistant greenkeeper, where he hoped to continue his career, but that wasn't to be after two years.

"A few people started to leave, so I decided to go and work for a local garden maintenance company who my dad also worked for. After a couple of years, I saw the opportunity to go and work at a school in Watford as an assistant groundsman and, after two years, I took over as the head groundsman. After a further two years, the opportunity came up to join Cumberland Lawn Tennis Club/Hampstead Cricket Club and I took the live-in position. After three years, things weren't right, so I left there and joined a school in Barnet for ten months."

"I was doing four jobs for someone else, which included the maintenance of a school and three cricket clubs. I started having a word around some of the local clubs and I picked up one or two of my own. From there, things progressed and I decided to set up my own business in 2008. I picked up two crickets clubs around Bedfordshire, whose marks were abysmal and they didn't know what they were doing. After improving these surfaces, word got around and I picked up four more cricket clubs. Out of the blue, I also ended up with Great Missenden Tennis Club, where the grass courts were horrendous and had 25mm of thatch. I started there four years ago and I have managed to turn those courts around with some TLC." 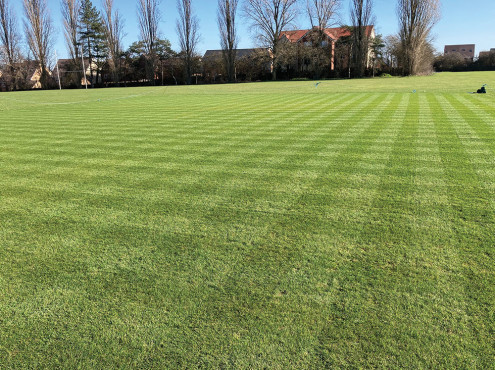 Ending the interview, Craig gave us his thoughts on the issues our industry is facing at this present time. "I have seen many clubs advertising job vacancies at the moment, which gives the impression there are not many people around to fill the positions. I believe some of the low wages that are offered and the hours we have to work are not appealing to a lot of the younger generation. They are drawn to other careers where the work-life balance is more appealing and generally better paid. I have found it difficult myself to get help. In the summer holidays, I had a couple of lads to come and help me. They start at 9:00am, but you get to 3:00pm and they think that their working day is done and want to go home."

"I have additional help from retired gentleman - including my dad and a few others who I can rely upon. The school leavers seem more inclined to do less physical work and they do not want to work the weekends. The unsociability of working in sport is not as appealing as it maybe once was."