In recent days, members have been asking questions about red thread in turf, it seems to be quite prevalent at the moment. This is partly because the weather has been recently wet and also quite mild during December and January.

There also appear to be far more cases of red thread, which aren't so easily eradicated just with the addition of Nitrogen.

Anyway to help you all understand a little bit more about the disease, here's some information on its life cycle and control

Red thread is often seen during the summer / autumn months but may persist into the winter months if conditions remain mild, temperature range (15-24°C).

Identification of the disease is relative easy with the turf grass having, irregular tan coloured shaped patches of damaged or necrotic grass varying in size 20-350mm with a pink / red colour cast caused by the fine red filaments / needles (10mm long) of the mycelium of the pathogen.

Red fescues: slender and strong creeping red fescues (Festuca spp.), Perennial Ryegrass (Lolium perenne L.) are the main susceptible species affected by red thread other grasses which can be affected are bentgrasses (Agrostis spp.) and (Poa sp.) The above grasses are used in most sport turf situations including Golf, Bowls, Cricket, and winter game pitches.

Fungus spores can remain viable for up to 2 years, survive temperature as low -20°C or high 32°C, This fungus is capable of growth at pH 3.5 -7.5 this means that the disease can occur on almost any amenity turf rootzone.

Red Thread spores (sclerotia) and (arthroconidia) are spread by wind, water, and by traffic, It is during periods of mild cool wet weather with temperatures 0-25°C and heavy dews that an outbreak of disease takes place. Attacks appear during summer / autumn months but can persist into winter if weather remains mild. These spores germinate into mycelia, infecting new plant tissue then reproduce to form fruiting bodies red threads. (sclerotia).

Turf grass is susceptible to disease attack when damaged or under stress from low fertility, slow growth (insufficient Nitrogen), drought, and compaction. 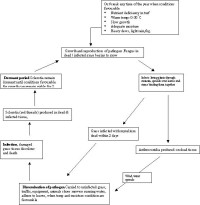 Keeping the sward healthy and using resistant turf grass species will reduce the incidence and severity of disease attacks. Apply a balanced fertiliser programme with emphasis on nitrogen input. Insuring not to over fertilise in autumn as this may lead to other pathogens attacking the sward.

And as a last resort an application of an approved fungicide can be used on Red Thread. Approved manufacture products available for application are contact and systemic pesticides with the following active ingredients Iprodione, Thiophanate-methyl, Thiabendazole and Carbendazim.