by James Grundy
in Chemicals & Fertilisers
on 11 Sep 2014

1 Fairy rings, the subject of superstition 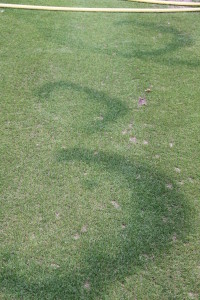 Fairy rings, the subject of superstition, conjecture and debate, man's relationship with these organisms has evolved over the centuries.

From folklore indicating either danger or good fortune - depending on the prevailing belief - to the current considerably more scientific understanding.

Fairy rings are now know to be fungi, part of the extensive phylum basidiomycota. This classification often referred to as the higher fungi is broad in its diversity and it is thought that at least 60 species of basidiomycetes can cause fairy rings. These species are most commonly referred to as mushrooms and puffballs which are to be found in numerous shapes sizes, colours and toxicities. These mushrooms are the fruiting bodies of the fungi and are scientifically referred to as sporocarps. It is from these sporocarps that the basidiomycota release their reproductive spores into the atmosphere by the trillions.

In relation to turf the term fairy ring is used to describe a number of diseases which are to be found on all types of turf areas from professional and amateur sports surfaces to domestic lawns. Anecdotally it appears that this turf disease is on the increase but what is actually happening and what is the cause of the marks we see?

Fairy rings are classified into two groups Endaphitic and Lectophilic. 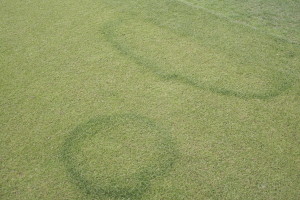 Endaphitic fungi: primarily colonise the soil and can potentially extend downwards up to nearly a meter. As usual the grass poa annua is particularly susceptible to die back due to its short roots and thus reduced access to water within the hrdrophobic or water repellent soils indicative of these types of rings. Conversely bents and fescue grasses can be more resistant due to their deeper reaching root systems. These types of rings often become evident during dry weather when the surrounding grass lacks vigour.

In practical terms the endaphitic fungi are classified by three categories of severity and symptoms and these are labelled as type 1,2 and 3

Type 1
• Ring of dead, necrotic or stressed turf which is water repellent
• Stimulated lush grass growth on the inner and outer edges of the dead area
• Sporocarp fruiting bodies evident

Lectophilic fungi: are the second classification which primarily colonise the thatch layers.

The lectophilic fungi are usually associated with what are commonly termed superficial fairy rings or thatch fungi. That is to say fairy rings which do not produce the sporocarp fruiting bodies but cause patches of yellow or greened up turf and depressions in the turf surface.

From these classifications we can see that the negative effects on turf are; foreign bodies (the sporocarps), dead areas, inconsistent growth, visual marks and scarring.

To understand what is causing these effects you need to have an appreciation for the formation of the fungal organisms in question. The sporocarps evident on the surface represent the proverbial tip of the iceberg. The majority of the fungi resides underneath the surface and is referred to as mycelium. The white coloured mycelium is the vegetative part of the fungus and takes the form of a spreading, branching thread like mass.

Fungi are nature's great composters and the mycelium spreads out from a single point (often initially evidenced as a green spot) where it feeds on organic material within the soil. As a by-product of this feeding nitrogen is released into the surrounding soil in the form of nitrates and ammonia and it is this mechanism which creates the stimulated areas of growth seen in a fairy ring. It is true also to say that sites which have a high organic content are more prone to fairy ring problems.

As the mycelium grows throughout the soil it also excretes toxic, or necrotic, compounds plus a waxy residue, both of which contribute to the dead areas seen in type 1 rings. It is the waxy compound which actively repels water from the surrounding soil particles acting much like water beading on the bonnet of a car which has just been washed.

This is why type 1 rings are more commonly associated with dry weather. 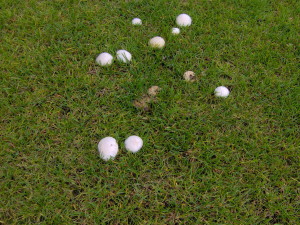 Understanding the structure of the fungi helps one to understand that each ring starts out as a single point which extends outwards. Each ring extends out from its starting point from between 150mm - 450mm per year as it does so the fairy rings diameter increases. As a result it is possible to roughly calculate the age of a fairy ring. Given this knowledge if sizeable rings are noticed in an area for the first time then the sensible question may not be why have I got fairy rings but why are the fairy rings visible now?

How can I cure it?

Control can be divided into the usual two categories chemical and cultural.

Historically chemical control was widespread and varied, with everything from formaldehyde and mercury to more modern broad spectrum fungicides such as oxycarboxin, triforine and benodanil branded as Ringmaster, Fairy Ring Destroyer and Mascot Clearing respectively. However with many such chemical treatments these have been withdrawn from sale due to greater understanding of the wider environmental effects.

Currently within the United Kingdom one chemical treatment is available. This is azoxystrobin branded as Heritage or Heritage Maxx. However this is backed by limited trial data and label approval for heritage is currently restricted for class two fairy rings. When applied it is recommended to be used in conjunction with a surfactant wetting agent to aid penetration into the waxy soil in which the mycelium resides.

As with many turf problems the increasing restrictions on available chemical controls suggests that cultural controls are the more suitable options. Often at Pitchcare we will field enquiries from someone who has a problem such as fairy rings and their first thought process is; how can I kill it?

Possibly a better question would be how can I prevent or control my problem and control does not automatically mean killing.

Understanding the disease cycle is important when considering control options. Learning the chain of events that contribute to a disease helps point out the weakest links.

The disease triangle is a concept of plant pathology and is based on the principle that disease is the result of an interaction between a host, a potential pathogen and the environment or weather conditions. Plant disease is prevented by elimination of any one of these three causal components. 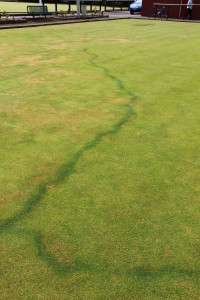 This is a good and strong theory to base ones assessment of what is happening however one must be careful not to overanalyse a situation. Much thought and focus can be given to the exact cause or single contributing factor that has resulted in a particular problem. Professionals may ponder the effects of a particular product or action and attribute guilt. Forgetting that the same problem is very likely to be prevalent within a domestic lawn or even farm field down the road, neither of which have been subjected to any of the physical stresses or maintenance products used on the sports turf surface.

As with many things turf related a practice of treating the cause not the symptom can be considered to be a sensible approach. Prevention is always better than cure and understanding and then reacting to your turf and the prevailing environmental conditions are at the core of any good turf management.

Where fairy rings are concerned improving the overall health and vigour of the turf by avoiding wet and dry cycles or low fertility both of which will show up the fairy rings are key factors for a good starting point to overcome the effects of the fungi. This would include management principles and techniques such as;

Balanced fertiliser programmes based upon chemical analysis of the soil profile
Soil pH of 5.8-6.5
Water Management, use of surfactants and appropriate levels of irrigation
Aeration
Thatch Control
Vigilance

More specifically one might consider a tactic of outcompeting the Basidio species with other more turf friendly ones such as Bacillus. The soil is a complex biological melting pot which operates to the same rules of nature as any other ecosystem. Something which can be summed up in one word; balance.

If there is opportunity for one organism to thrive then it generally will. The skill with turf management is to produce the conditions that enable all the desirable organisms to thrive and the undesirable ones to either die back or just reside under the radar with little ill effect.

Under these circumstances it is wise to consider the knock on effects of any cures or treatments for a given problem.

One approach to controlling fairy rings is to aim to reduce their niche within the soil profile by competitively outcompeting them or as it is commonly termed; competitive exclusion. Plants rely on a symbiotic relationship with fungus in a similar way to the relationship you have with the bacteria in your gut. Broadly speaking some of the fungi in your soil work against the plant some work for it.

We've already establish at the start the sporocarps release trillions of fungal spores into the environment, so setting out to eradicate something which is so prevalent within the environment seems a futile approach. You can't really eradiate them entirely just manage them.
The way to approach this by the tactic of competitive exclusion is;


The first two options are physical operations you can carry out yourself with the correct Aerating and Scarifying equipment.
The third option would in most cases require a sprayer to apply the treatments which may include a programme of the following items used in various combinations depending on situation.

• Compost Teas
• Fungal Additives and Boosters
• Bio Stimulants
• Mycorrhizal Fertilisers such as Maxwell Myco 1 or Myco 2, ideally these would be applied immediately after aeration. The mycorrhizae can then contact with live roots and colonise more efficiently. 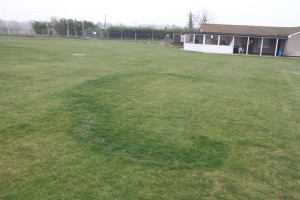 Clearly the above approach may represent necessity for an examination of the overall management regime being employed and this is not always deemed practical but it may be opportunity for some considered alteration and even small interventions in the right areas can make a positive impact.

If fairy rings are currently prevalent and have caused damage the best course of action for repair of dead areas would be to try and penetrate the waxy mycelium zone in the soil which forms the impervious barrier. The way to do this is by rehydrating the soil through the application of good quality surfactant wetting agents and bio stimulants.

Employ a little and often approach possibly into aeration holes but these are not absolutely necessary. You might also want to start the competitive exclusion process by looking to introduce some beneficial fungi and bio stimulants at the same time and then regularly repeating this for a time after you have finished applying the surfactant.

If you are undertaking this work at the end of the summer it is an ideal time to repair the damage by taking opportunity of moist conditions whilst the soil temperatures are still relatively high. The dead necrotic areas can be reseeded and top dressed once you have achieved some moisture content within the top of the soil profile.

Whatever the cause of any given fairy ring, the fundamental principles of good management will help to mitigate the impact and reduce the incidence of, not only this turf disease, but others too.