With over 70% grass cover still being maintained in his goalmouths, he is confident that the pitch will be able to stand up to the very busy Christmas fixtures and the remaining winter period games.

The pitch at Deepdale was semi-reconstructed last May. The top 20mm was fraise mown and replaced with 200 tonnes of 90/10 sand and soil reinforced fibre rootzone (Fibresand) materials. Overseeding was undertaken using a Barenbrug Bar 7 seed mixture sown in several passes at 45g per sq m. The seed germinated within seven days and established very quickly. (See link for Preston pitch renovation article). 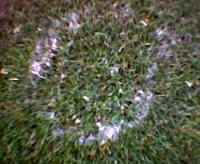 Richard, however, did have a few worries during the early days of establishment, particularly during a very hot spell in June when the turf was becoming stressed. Water was applied on a regular basis,some days up to three times a day. This had some adverse affects in that, due to its sand based construction, plant nutrients were being leached away very quickly. To rectify this, Richard was having to feed the pitch every 10 days with 12 bags of 12:0:9 Rigby Taylor fertiliser, followed up with some additional feeding of micronutrients, particularly manganese.

To help keep a good cover of grass in the goalmouths the height of cut is maintained at 50mm, whilst cutting the remainder of the pitch at 25mm. This is a common practice now at many club grounds.

With all the regular inputs, such a mowing, aeration and feeding, Richard has been able to produce a dense sward that, in turn, brings benefits of reducing wear and tear to the playing surface. The result of which means that Richard and his staff have very little divotting to do after matches.

As with most sand based pitches Richard has had to overcome and keep an eye open for turf diseases, of which leaf spot has been one. Also this year his turf was affected by a disease which he had not seen before. It came in over a weekend in mid October. Richard put it down to the very wet, mild and moist conditions being experience. The

Since the attack Richard has introduced a regime of brushing the pitch more regularly to remove dew and moisture from the surface, especially during weekends.

With the colder weather now setting in Richard ensures the pitch is cut prepared and marked by Fridays, enabling him time to put on any frost protection sheets if required.

Depending on the weather, Richard may still need to apply water to the pitch on Saturday mornings to give it the playing characteristics the players are now expecting for games. Pre match warm ups on the actual pitch are usually restricted to 15 minutes, and most of the ladder works and drills are conducted off the pitch area.

Richard and his assistant Dean Ash are going to be very busy during the festive period with home games on 18th and 28th December and 1st and 7th January. However, he is confident that the pitch will more than stand up to these demands, providing a superior home advantage for his players during this busy playing programme.