0 Forest Green Rovers - the little club on the hill!

"Being part of the green revolution at Forest Green is both exciting and rewarding, and I'm hoping that what we are doing here will encourage other clubs to take a look at how they operate"

Forest Green Rovers are the longest serving club in the Football Conference - the Blue Square Bet Premiership as it is now known. Their twelve year stay looked like coming to an end in April 2010 when they lost 2-1 to Grays Athletic and were relegated. However, just two months later, they were reprieved after Salisbury City were removed from the division for breaking financial rules. At the end of that season, the then chairman, Trevor Horsley, revealed the club was in serious debt and described the club's position as "a crisis".

Up stepped green energy tycoon and Ecotricity owner, Dale Vince, who launched a takeover of the club in August 2010, becoming the majority shareholder and then chairman a few months later.

Ecotricity are the largest supplier of green electricity to the national grid via their portfolio of wind powered generators, and their latest project is to provide gas from food waste.

There's no fracking about for this eco pioneer and, perhaps not unsurprisingly, in June 2011 Mr Vince announced that he intended making the club's New Lawn ground the first organic football pitch in the world.

Forest Green even made national headlines in February 2011 when Mr Vince introduced a ban on all red meat being sold at the club!

In December 2011, the club began work on installing 180 solar panels to the roof of one of the stands, helping the club generate 10% of the electricity needed to run the stadium and, the following April, introduced the first robot lawn mower to be used by a British football club on to its playing surface. The Etesia EMT105 uses GPS technology to automatically guide it round the pitch and gathers power from the solar panels, spending every day 'munching' its way over the pitch, with final presentation carried out using more traditional methods.

Charged with tending the pitch is Head Groundsman, Stewart Ward - no doubt replete with salad sandwiches - who explains the green revolution in more detail.

The pitch at Forest Green Rovers is one big project. We are entering our third year of turning it into an organic pitch by instituting sustainable practices, analysing carbon footprint and measuring water usage."

"Each season we are trying new things, stuff that has never been used on a football pitch before or, at least, very rarely. Last season it was seaweed fertiliser, and this season we are adding charcoal to provide a carbon base for the good bacteria and fungus to cling to, plus a coconut wetting agent which helps water flow evenly to all parts of the soil profile, preventing over/under-watering. I've seen these techniques used in other areas of horticulture, so I'm confident these organic products will benefit the pitch."

In 2012, FGR achieved the Eco-Management and Audit Scheme (EMAS) - the gold standard for environmental performance. In the world of football, no club in Europe has it. EMAS systems enable measurement, targeting and reporting on all key environmental impacts.

"We are currently collecting water from under the pitch to use for pitch irrigation. Next, we'll look at how to collect rainwater from the stadium roof and how to sink a borehole to collect local water. Our pitch will be irrigated by a mixture of rain, drain and spring water - and we hope this will make it independent from the mains."

"We were working on an LED floodlight system, but the technology is still too energy intensive. So we're looking into options for low energy floodlights. Watch this space."

"The power of the sun is collected in the form of solar PV along the stadium roof and at ground level. These kick out 45kW capacity and, being a ground-based system, greet fans arriving at the ground. It's highly visible and accessible in a way that roof mounted systems aren't - its purpose is to be seen and to be a part of the environmental technology on display. Currently, they are providing ten percent of our electricity, but we aim to get this up to twenty-five percent."

The club's environmental policy is further on display with large areas outside the ground planted with wildflower mixes to encourage bees, butterflies and other fauna. They provide a splash of colour rarely seen at football stadiums. 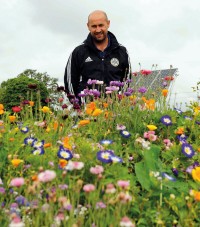 "When we took red meat off the club menus, we achieved national and international coverage (and plaudits) for the move," continues Stewart. "Now, we are home to the first meat-free football menu. We did it for strong environmental and health reasons. We're working to the principles of local, seasonal, fresh and organic food wherever possible."

"When the rowbot mower arrived at the New Lawn, it put us in the same league as Bayern Munich, who also care for pitch and planet using the same revolutionary technology. The GPS technology allows the pitch to be mown without the need for human intervention - saving up to fifty percent of my time - it even sends me a text if it runs into trouble."

"There's a hidden advantage to the EMT105 too," explains Stewart, "as we were being troubled by a marauding badger, which the machine has successfully scared off!"

The Little Club on the Hill, as it is often referred to, occupies an elevated position in the hamlet of Forest Green close to the small town of Nailsworth in Gloucestershire. This provides additional challenges for Stewart. "We are officially the third highest club in English football, so we get extreme weather conditions which can change very quickly - frequent rain, high winds, snowfall and heavy frosts."

"Being situated on top of a hill in the Cotswolds means we have an extremely poor soil profile. The rootzone depth is not adequate, so the methods needed to grow the grass and maintain it through winter are somewhat different. It makes planning and decision-making vital."

e have serious shade issues in the southern goalmouth when the grandstand keeps it in permanent shadow for two months during the winter. We are putting together a lighting rig, powered by renewable energy of course, which will be used for the first time this coming season.

Hopefully, that should resolve that problem and also help strengthen growth across the pitch."

"The pitch usually requires an extensive feeding and spraying programme, as well as aeration, throughout the football season, so weather monitoring and pitch data becomes vital in planning work around more than thirty fixtures between July and April."

"We've improved the drainage, and the FGR Supporters Club purchased new frost covers for us, which are vital for a club in our position. These measures helped reduce the number of postponed games to just one last year, one of the lowest in the league."

The FGR Supporters Club are an integral part of the set up. The New Lawn was funded by the sale of the old ground

for housing development. Carrying on a tradition set by supporters back in the 1950s, the new stadium was painted from head to toe by the supporters, all on a voluntary basis.

For a young man who entered the industry through a Youth Training Scheme in Gardening and Groundsmanship with Rowntree Mackintosh PLC, these must be interesting times?

"I completed a National Certificate and a National Diploma in Horticulture and Landscaping at Askham Bryan College, before achieving a BA (Hons) in Landscape Architecture from Manchester Metropolitan University and studying for a Masters in the same discipline from Leeds Metropolitan. Throughout my education, conservation and ecology was an important part of the curriculum and, when I was Grounds and Sport Turf Manager at Hartpury College in Gloucestershire, that ethos was carried on."

"Being part of the green revolution at Forest Green is both exciting and rewarding. Whilst it is important to us, both from an environmental and financial point of view, I'm hoping that what we are doing here will encourage other clubs to take a look at how they operate," he says passionately.

Presentation ranks highly on match days and, for this, final cut and striping is carried out using a Dennis G860, with post match clean-up undertaken using Honda rotaries.

"I get help from volunteers on match days, who put out nets, flags and replace divots but, other than that, it's just me and my robot," he says.
"Renovations consist of fraise mowing off the annual meadow grass, and we are three years into a programme of adding 80 tonnes of sand each year to increase the soil profile. This is followed, of course, by reseeding. Budgets are tight, so everything is dependent on what money is available. As I control the grounds maintenance budget, I'm able to set aside enough to do the work."

"To help control the budget, I aim to buy demonstration equipment, working direct with manufacturers and purchasing outright. I'm not overly bothered about specific makes of machines as long as it does the job it is intended for," Stewart confesses.

"I'd like to see more manufacturers look at how sustainable their machines are, especially with the recent advances in electric power. Hopefully, they are 'on the drawing board' and we'll see new models in this area sooner rather than later."

Asked what advances have helped him in recent years, Stewart cites compost tea making equipment, the Sisis Aer-Aid and his Honda pedestrians as 'must have' items, whilst his wish list includes a pedestrian Verti-Drain and a pedestrian sprayer and seeder. 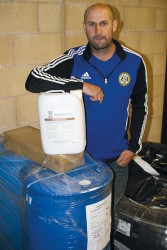 "The changing weather patterns have significantly changed my approach. The severe rain last season put us on the back foot, so sometimes I feel the best practice after heavy rain is not to do anything. Some groundsmen feel they need to justify their position by being on the pitch each day but, if I feel that's not what is best for the surface, then I will leave it. This is not a 9-5 job. Some days it's best to do very little on the pitch whilst, on others, I'll be in at 6.00am and still be here at 10.30pm!"

"Taking regular soil samples is vitally important," stresses Stewart. "Every two months, I like to analyse what effect we are having on the pitch with what we are adding and be able to react quickly."

"I hand weed the pitch, whilst pests and diseases are controlled by ensuring the grass is at its optimum of nutrition and by feeding with organic smoothies, when problems occur, to ride them out. Andrew Turnbull at Sustainable Turf Management is always available to offer advice on a consultancy basis."

"There are a lot of intelligent, hardworking people in our industry and what we produce is vital to the ongoing success of our sports."

"The industry is in the best state it has ever been. There are all sorts of interesting projects being undertaken across many sports - football, cricket, rugby, golf. Those employed within the sector are pushing the industry to design new products to make things possible that we couldn't do five or ten years ago and, at FGR, we are at the forefront of pushing the boundaries. That makes some people in the industry uncomfortable, but we are proud of what we are doing."

"Yet, we still need to raise our profile, and this could be done, quite simply, through more media and PR so people understand what we do. Many still think all we do is cut the grass and that needs to change."