by Ian Mitchell
in Training & Education, Machinery & Mechanics, and Golf
on 25 Aug 2015 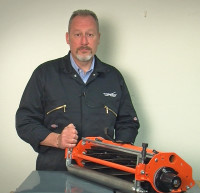 Ian Mitchell, until recently a Senior Training Technician at Cutting Edge Training, has a vast knowledge of the turf care industry. He began his career as an apprentice at Ransomes, Sims and Jefferies in 1979 and has worked in the Far East, Europe and the UK. In this article, he discusses the importance of greens rolling to get the ultimate finish for your turf

Many of you may not realise that rolling a golf or bowls green to produce a smoother, truer surface is a regular activity for every greenkeeper and golf course. Whether you have a dedicated turf roller or not, every time the greens are cut, they are effectively rolled by the action of the cutting units or mower passing over the surface. After all, it's not the cutting cylinder that leaves the stripe, it's the roller the cutting head runs on that produces the distinctive finish to finely mown surfaces.

So it's not a question of whether to roll or not, but more a question of how much rolling we should incorporate into the maintenance programme to get the best results for our course or rink. In a previous article, we covered how, by changing the weight of the cutting units' rollers, we can easily increase, or decrease the amount of rolling action we deliver when mowing the surface. (See Pitchcare June-July 2014).

The classic way to improve the speed and presentation of the playing surface is to double cut. Cutting twice will remove more grass and leave the sward with a truer and tighter cut, but it is also double the amount of rolling action over the surface, which also increases speed and trueness.

With modern machinery, we can achieve the 'double cut' effect by increasing the clip rate (or cuts per metre), thereby achieving an improved cut quality, but without the additional rolling effect. By separating the two activities, we are in fact getting more control over our mowing regime; having produced a higher quality cut, the greens performance can be checked and then an additional roll added to increase the speed further, if required.

So it can be useful to separate rolling from mowing, which is why there are a number of roller options on the market, which all deliver an additional rolling action to the surface. 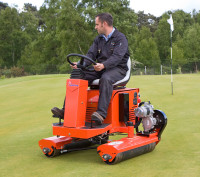 Accessory weighted rollers, some with vibrating elements, will transform the greens triple mower into a greens rolling machine. Most riding greens mowers can swop units quickly, and some courses keep an older greens mower, which is dedicated for these utility heads, making this a really viable option.

If accessory units are not viable, then there is a range of self-propelled turf rollers, which give an excellent rolling action and use trailers for easy transport around the course.

It is easy to see that rolling will immediately produce a smoother, truer surface. Such improvements can easily be measured using a Stimp Meter or a Parry Meter. What is perhaps less well understood is that this effect will last on the green for up to forty-eight hours after the roll, leaving a residual effect and higher than 'normal' speeds, improving the standards of the playing surface, without requiring daily use of the roller.

There has been a move, in recent years, to operating a mix of both mowers and rollers as part of the regular course maintenance programme. 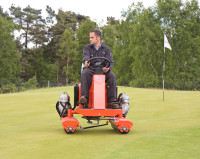 So, when higher speeds are required, both mowers and rollers are used. In hotter, drier conditions, mowing and rolling on alternate days can produce the best effect, as the stresses of daily mowing are removed, without impacting green speeds and smoothness/trueness. In the autumn, again, the roller can be used to replace daily mowing, reducing plant stress whilst retaining a consistent playing surface.

There is more than one way to roll your surface, but what effects can they have, and how can we compare them? The weight and surface area data will show the ground pressure or PSI of the roller, but this is only one aspect of its rolling action. Another way to compare different rollers is to calculate 'roll factor'. This is done by simply dividing the weight of the roller by the size and number of rollers it uses.

For example, a Smithco Tournament Ultra roller weighs 528kgs and has two 20cm diameter x 91cm long rollers. Therefore using the formula above we have the following: 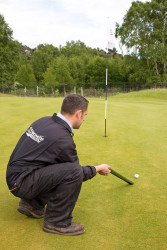 The blade assists with oxygen and moisture replenishment and also helps break surface hardness, assisting the roller in truing the surface.

So, the above offers a clear comparison between the rolling effect of a self-propelled turf roller and a triplex mower accessory.

Both the above will produce a smoother, faster playing surface compared to a single mown pass, but other studies have shown that the self-propelled machines have a greater rolling effect, which lasts longer. Perhaps the above calculation proves why this would be the case.

So, when making a decision about which type of roller to go for, look at the design and calculate the rolling factor before making that purchase decision. With the rolling factors calculated, you can then review your soil type and construction and decide on the right option for your course.

There is always a concern over adding compaction to a greens surface. So much time and effort goes into aeration and relieving compaction that it can seem surprising that anyone would then want to go out and roll the surface. It should be understood that what we are talking about here are lightweight rollers, which are designed to flatten out surface imperfections and produce a smooth, true playing surface.

One of the brand names for a turf roller is 'Turf Iron', which is a great way of describing the smoothing effect rolling has on the surface, while not suggesting significant compaction.

It should also be noted that ground conditions do, of course, play a big part in the effect that rolling can have on the surface; rolling on wet or saturated ground will clearly result in compaction so, as with all tools and equipment, a sensible approach to operation is essential, if the desired results are to be achieved.

Time is also a key element; any additional activity takes time to complete and has to be fitted into a busy work schedule. An experienced operator will roll greens in about the same time as it takes a greens triple to mow them, so it's not a bad return, given the surface improvements gained by operating a rolling programme.

Accessory rollers, fitted to a greens triple, have to be the easiest rollers to use. There is no additional training or operating skills required to successfully use them. 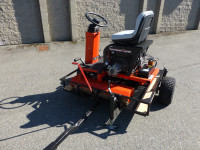 Self-propelled rollers are quite different, and will require training and 'seat time' for the operator to get the best out of them. To start with, the operator sits facing forward, while the machine moves sideways, making steering and manoeuvring very different.

Some models have a conventional steering wheel, while others use a tiller bar to control steering. Traction can also be an issue, particularly on wet, undulating green surrounds. Single drive rollers need to have a rubber coating to gain traction, and will only climb in a single direction (rubber coated roller at the bottom), while other models use double roller drive, allowing them to climb in either direction.

Transmission is either by petrol engine or electric motor. Both use bi-directional transmissions, allowing fast working speeds, and removing the need for turning at either end of the green. The operator simply changes direction and moves across to pick up the next pass.

All rollers use trailers for moving around the course, so a towing vehicle is essential. Some models have the trailer designed into the machine chassis, and the operator engages the trailer by pulling the mechanical linkage downwards. Others have a separate trailer, which the roller drives into for transport and storage.

Tom Nikolai from Michigan State University has studied the effects of greens rolling for many years and, in the December 2011 issue of the GCSAA's Golf Course Management magazine, the results of research he undertook at golf courses in Michigan, Sweden and Florida were published.

2. In 2009, the courses in Michigan and Sweden found no detectable differences in greens speed between rolling daily and mowing less often, and daily rolling and mowing

3. The courses in Michigan and Florida found no noticeable change in greens speed between mowing daily and alternating daily mowing and rolling

In September 2011, Richard Windows and Henry Bechelet published a paper for BIGGA's West Midlands section. The premise was that you can restore and maintain the dominance of finer grasses in greens without compromising playing quality. They suggested that less aggressive surface preparations would create a more settled environment which, in turn, would encourage the finer grasses.

Rolling is a significant part of this process. They quoted research by the USGA that "rolling could be implemented as often as four times a week (on sand based greens) with no negative effects to the long-term health of the turf. In the UK, most greenkeepers who roll seem to do so 2-3 times a week at most. The American example might be for a different league of course in terms of its manning but, even with such a frequency, no compaction is evident, even after several years of use. This is because the ground pressure of the rollers is very small and the action is one of smoothing rather than compacting. Regular surface pricking and/or pencil tining should be undertaken as a matter of course and will prevent any perceived sealing of the surface."

Our attitude to rolling has changed over the past twenty years; originally it was just to increase speed, but now it has become established as an essential fine turf management practice.

So, as stated earlier, it's not a question of whether to roll or not, but more a question of how much rolling we should incorporate into the maintenance programme to get the best results for our course or rink.