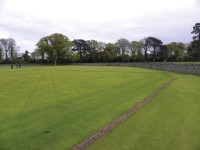 We've certainly been clocking up the miles over the past couple of years with the contracts secured through the ICC's Pepsi ICC European Development Programme (DPFF), and working overseas has bought with it some unique challenges. In addition to the projects at Moara Vlasiei and Malahide, we've undertaken an in-depth study into the existing cricket facilities at Gibraltar's Europa Ground and provided recommendations as to the best solution for bringing its facilities bang up to date.

As well as advising on the mix, construction and specification of new facilities at the Europa Ground, we identified a number of issues specific to this unique project; including the transport/import of materials into Gibraltar, the provision of natural turf playing surfaces and how to combat the salty spray that is blown in off the Med.
Whilst the Gibraltar project remains an exciting - if challenging - prospect for the future, the projects in both Romania and Ireland are now well on track to completion. Here, we take a look at progress at each of the locations and consider some of the specific challenges each threw into our path.

Part of a 700,000 euros project at Malahide Cricket Club in North Dublin to create the Republic of Ireland's only international-standard cricket ground and the 'home of Irish cricket'. Once complete, Malahide will become the only international ground for any sport in the North Dublin area, and it is envisaged the project will help inject some 1.5m euros into the future economy as it attracts international fixtures and teams such as Australia, England and Pakistan travelling to play at the new facility.
TTS was recommended to lead the the grounds design and construction by the ICC, which acted in an advisory role, whilst funding for the project included a substantial grant from the Irish government.

At the time of writing, the last feature of the first phase, which involved the construction of an 11-pitch international standard square in the outfield of Malahide CC's existing ground, had been completed in autumn 2009. July 2011 saw the start of the second phase of the project, which covered outfield works including grading, the installation of primary and secondary drainage systems and ducting for the cabling that will be required for TV coverage of international matches.

The construction of the One Day International Ground is now complete in its 'growing in' phase. There remains some final grading and tidying works to be completed when the weather improves, with Malahide CC aiming to start using the ground for the 2012 season.

One of the main issues at Malahide has been its rather beautiful location. Set within the historic surrounds of the Malahide Demesne Regional Park, the project has been subject to a standing archaeological watch which resulted in numerous delays during the earth moving stages of the project. The fact that the club wanted to continue play in and around the areas being worked on also meant that timescales were longer than would usually apply.

During phase two of the project, there were also some last-minute changes to outfield design due to changing requirements from Fingal County Council.

On our most recent visit to site, we witnessed the new drainage system being tested - and coping admirably - as the Dublin area experienced 100mm of rain in four hours!

The objective of this project is to develop what will not only be the first International standard cricket ground in Romania, but also the first in Eastern Europe. 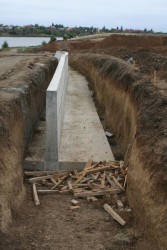 Spearheaded by Cricket Romania, a body set up in 2009 to promote the game throughout the country, the project is funded by Gabriel Marin. TTS was awarded the contract for consultancy, design and project management on recommendation from ICC Europe and has worked closely with Cricket Romania Chief Executive, Rangam Mitra, who is co-ordinating the project and local contractors.

In the last instalment, considerable earthmoving work, including the construction of a retaining wall, had been undertaken. However, due to poor weather in autumn 2010, drainage, irrigation and the installation of the square was delayed, and set to be completed in spring 2011, with the aim of sowing in April.

With the advent of spring and the hope of sunny weather to come, work recommenced in earnest with the goal of getting the ground ready to allow sufficient gestation period after primary development, to enable surfaces to be fit for play during the 2013 season.

Works continued throughout the summer with the outfield, banking and retaining wall all being completed, and efforts are now focused on the construction of a pavilion.

The outfield construction included a somewhat complex pipe drainage and irrigation system which, along with the rest of the works, was designed by TTS, who also monitored all construction works and instructed contractors in best practice for maintaining the new ground construction.

One of the biggest challenges of this project has been to ensure that the contractors responsible for maintaining the ground fully understand the basic cultural practices involved in its maintenance, as they had no previous experience of having worked on cricket grounds.

We also had to pay particular attention to the design of irrigation and drainage systems, as the Romanian government has very high standards for water entering water courses and the extraction of water for irrigation.

Another specific challenge was sourcing suitable materials for the construction of the ground; for the cricket loam, a Romania-wide search was undertaken and, after a year, a soil with a breaking point of 85kg was found and transported to site. In terms of selecting the grasses, the key was finding a variety able to cope with an extreme annual temperature range, from as high as +40OC in the summer to -15OC in the winter.

As we enter the new year, we look forward to seeing both new grounds continue to mature.