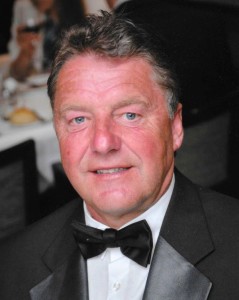 Tributes have been paid to Stephen Campbell ­- Appleby Golf Club head greenkeeper for 40 years ­- who has died aged 65.

Described as a joker and family man who lived life to the full, Stephen, of Bongate, Appleby, with his wife Vivien and was known to friends as Steve, was always a "people person" who got on with everyone.

Born on 15th September, 1955, he was the son of Frank and Margaret Campbell. He is survived by his brother Malcolm.

When they were young their parents owned a pub in Manchester before moving to the Punchbowl Hotel, North Stainmore.

Both his parents died when Stephen was young and he and Malcolm moved in with their Auntie Rene and cousins at Brough.

He was also very close to his Auntie Rita and Uncle John who lived at The Riggs.

His first job was as a farm worker at both Knocking Tofts and West View Farm, Brough.

He then worked at Warcop on the ranges before being employed at British Gypsum for a short while and the on the railways as a team leader.

He later went to work at Appleby Golf Club as the head greenkeeper for 40 years, and was due to retire later this year.

Stephen first met his wife Vivien (maiden name Furniss) at a local dance and they were married on 30th March, 1974.

They were the last people to get married at St Michael's Church, Appleby.

They lived for a short time in a caravan at Colby before moving into a farm house.

A few years later they bought their first home at Bongate, Appleby, where they have lived ever since.

Stephen's family described him as someone always keen to learn new skills and who would help anyone out, always full of energy and "65 years young".

He enjoyed playing golf with his friends for many years, even before he started as the head greenkeeper, and loved to travel including to places such as New York, China and the Caribbean.

He said recently that he had travelled everywhere in the world he wanted to go.

He loved music and when he was younger he played the trumpet in a band. He continued this interest and brought out his cornet to play during the clap for the NHS every Thursday night.

On Thursday, 18th February Stephen's heart stopped and his granddaughter Olivia successfully performed CPR on him.

He was rushed to hospital but died in the early hours of Saturday, 20th February, surrounded by his family.

The family expressed their gratitude to all NHS staff who supported and cared for Stephen and his family. They will be eternally grateful for the dedication and hard work shown.

"Throughout the years he has produced a course that is loved by all that play it. The quality of the putting surfaces tended to by him are held in the highest regard and his course presentation has been exemplary."

"A fine single figure golfer in his own right, he represented the club with distinction at county inter- club level and was a tough competitor. Among his finest achievements was winning the Whitehead Trophy Handicap Knockout on several occasions."

"Steve will be sadly missed, not only as a fine greenkeeper but as a valued friend to all that knew him at the club. His legacy will live on for generations to come."

The funeral is being arranged by Glyn Jones Funeral Directors, Appleby, with donations in Steve's memory to be made to the Great North Air Ambulance Service.