Harlequins Rugby Football Club play at Twickenham Stoop, which is situated in Twickenham in south-west London. The stadium is named after former England international Adrian Stoop who was a Harlequins player and later president of the club.

Harlequins acquired the then athletics pitch in 1963, a ground of fourteen acres, close to the RFU's Twickenham stadium and headquarters. It became the training pitch, and eventually, Harlequins home ground. The site provided a ground that could be developed and, since then, much has been done in terms of upgrading, with a current capacity of 14,816. The stadium was known as the Stoop Memorial Ground for many years, but it was renamed The Twickenham Stoop in 2005. 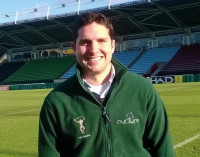 Harlequins play in the Aviva Premiership, which they won in season 2011-12 and, at the time of writing, were lying in fourth place in the current season. The team also competes in the Heineken Cup, the prestigious European tournament, and the LV= Cup, of which they are current holders.

The pitch at The Stoop is maintained by Nurture Landscapes who employ 200 employees working out of twenty-one depots across the UK. The site is overseen by their Contracts Manager, Nick Ebelthite, with Head Groundsman, Paul Sykes, looking after all day-to-day tasks.
Nick trained at Merrist Wood College, covering various aspects in Horticulture, whilst Paul completed an HND in Turf Science and Golf Course Management at Myerscough.

"I work very closely with my Director, Paul Bean, and Stadium Management at Harlequins," explains Nick, "and we have to consider the requirements for the ground throughout the year."

"The pitch was built on an old recreation ground, so the profile is not ideal. It's mainly sandy loam, but we do have clay around 400mm down. We have worked very hard in recent years to help ameliorate more sand into the profile, and we are hoping to carry out major renovations in the near future, when finances allow. At the moment, there's nothing more than basic primary and secondary drainage systems."

"Harlequins does have to operate as a business," continues Nick. "So we are often managing additional pitch usage, from community to corporate events to international games."

"The maintenance regimes are fairly straightforward. We can be cutting three times a week or more, depending on growth, maintaining a height of cut of 38mm, and we'll also verticut fortnightly in the growing season. We do have to verti-drain on a weekly basis during the wetter months as we have an issue with black layer and organic particles in the top surface which stops efficient drainage. We linemark at least once a week depending on the fixtures. We tend to be very fortunate with weeds and pests on the pitch - apart from the London foxes which enjoy digging the pitch up - we've tried various humane ways of getting rid of them, but without success."

"We are very fortunate to have a great team at Nurture who come and watch the game, and then it's 'all hands to the pump' after the match."

"We are always aiming to ensure the pitch is looking its very best. We like to think a beautiful pitch helps with the positive attitude the players need. We use a higher grade linemarking paint for televised games to ensure it looks great."

"Paul and I are forever monitoring the weather and making various decisions based on this. But you have to work with what you get, and the match fixtures continue whatever the weather!" Nick points out.

"As well as the pitch, we also have additional landscape areas to maintain."

"Budgets are always a factor, but our biggest challenge is time. In previous years, we also had Rugby League to contend with through the summer months - London Broncos used to ground share until recently - which only gave us a few weeks between games to carry out works. Last year, we removed 70% of the sward, hollow cored, seeded and topdressed with 120 tonnes of sports sand. We had the first game just four weeks later."

"We carry out a number of soil analysis tests throughout the year to monitor our levels, and we also take regular soil temperature readings," Nick confirms, "but our main focus is the end of season renovations as, without that, the pitch would not stand up to the onslaught of rugby through the winter."

Nick goes on to say that, in recent years, investment has been made on the irrigation system, with new sprinkler heads, pump and computer. The main drain carrier pipe was renewed last summer as well. "Investment is being made in the pitch," he says. "We try and carry out as much of the work in-house wherever possible."

Paul has a good selection of machinery at his disposal. "On site, we have both an Izeki and Kubota tractor, a set of tractor mounted hydraulic triple gangs, pedestrian 'match day' cylinder mower, Verti-Drain, tractor mounted roller, a Sisis Quadraplay, dragmat and chain harrows. We also have a tractor mounted sprayer and granular fertiliser applicator, plus various hand-held machines and hand tools. Having items such as the Quadraplay and Verti-Drain has made a big difference to the quality of the pitch."

"With Nurture being a nationwide company, it follows that we source our requirements from a national supplier to guarantee consistency. Where possible, we always try and stick with one brand, for example Honda hand mowers and Stihl hand tools are our preferred machines."

It also follows that the company remains compliant with all current legislation and Health & Safety. "Training is always at the forefront, and we review all of our staff needs on an individual basis. Within the company we have Health & Safety consultants and a number of the contracts managers have gone through IOSH training."

"We also aim to put all employees through first aid courses on an annual basis."

"We are also very proud of our apprenticeship schemes. We currently have a number working with us across the country and a good number of our full-time staff, who originally started as apprentices, have really developed their roles within the company," adds Nick proudly.

"We also have various ISO and other industry accreditations that we worked very hard to achieve."