So there it is. An impressive Germany shrugged off the challenge from Argentina to clinch their fourth World Cup.

The atmosphere in the run up to the game was interesting. Out on the streets masses of Brazilians were getting behind the Germans to beat their Argentinian rivals, whilst hordes of Argentinians had travelled across the border to support their team. 70,000 Argentinians were in or around the fan park in Rio. 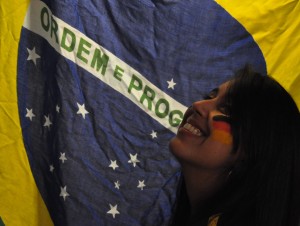 Of course Brazilians were subdued after embarrassing defeats, but the lift of being hosts to such a final brought the party spirit back.

As a roundup, here's a look at the prices here:

Inside the stadiums and fan parks I've been to, the drinks were not cheap but reasonably priced considering the occasion. Beer was about £1.50 for a 350 ml can.

The food within these areas was pretty cheap to be fair. Large sandwiches, hot dogs and pastels were available at around £1.80 each. Pastels are extremely tasty and filling but not at all good for the waistline. They are similar to a pasty with a pastry outer layer which is then usually filled with cheese. It's then deep fried in oil and also the alcoholic spirit, cachaca, which causes bubbles to form on the surface of the pastel. 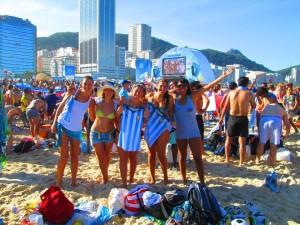 Outside of the stadiums and fan fests, food and drink prices vary wildly between cities and districts, but to generalise it is cheap compared with the UK. That there are around 3.5 Brazilian Reais to every British Pound goes some way to explaining this.

The accommodation has been crazy during the World Cup. I've heard of single beds in a room of six in a Rio hostel going for £200 a night!

Finally, here's something worth a mention. Since July 1 there has been another football tournament happening in Brazil.

On the streets of Sao Paulo youth teams from all over the world have been contesting the 'World Street Football Championship 2014'. Literally played on closed off city-centre streets, the tournament founded by the Argentinian ex footballer, Fabian Ferraro, aims to promote leadership, teamwork and fair play. 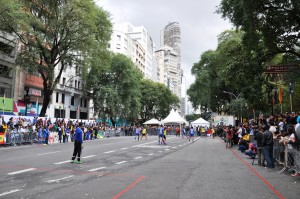 The playing was skilful and concise and involved teams predominantly from South America, but also from Africa and Europe. The championship was in World Cup format, with group stages then knockout rounds.

Teams such as Brazil, Argentina, Israel, South Africa and the United States were in the tournament, with the ultimate winners being Colombia.

The only European teams involved? Catalunya and… Germany.

Thanks to anyone who has read this blog over the past month or so. I hope you have enjoyed reading it as much as I have enjoyed writing it.

A victory for the home team wasn't to be, but few could argue that Germany didn't deserve the title.

Watch this space for a World Cup groundsman report.