by Editorial
in Bowls and Industry News
on 09 Jun 2014

5 Pitchcare - Working with the Waterloo Back in February of this year, Pitchcare were made aware of the plight of the Waterloo Bowling Green in Blackpool, home of the sport's most prestigious championships since 1907 and regarded as 'The Wembley of Crown Green Bowls'.

Extensive financial investment in the renovation of the historic Waterloo Hotel meant that new incumbent greenkeeper, Mark Audin, was facing a challenge to produce a green to the standard that he felt the venue should offer.

Pitchcare were approached by Mel Evans, a recent recipient of an MBE for his services to Crown Green Bowls, because he believed we had the expertise and products to return the Waterloo bowls green to the standard deserving of Crown Green bowling's most prestigious championship.

A visit from the Pitchcare team, including Technical Manager and Agronomist John Handley, was undertaken and Pitchcare set about working with a determined and energetic Mark Audin to improve the condition of the green. The remainder of the surface was dominated by a bright pleurocarpous moss, Heath Plait-moss (Hypnum jutlandicum), a small portion of Silver Thread Moss (Bryum argenteum) and bare ground.

The cutting height was set at 7mm and there was evidence of an infestation of Fusarium (Fusarium nivale) and Red Thread (Laetisaria fuciformis). The Fusarium had been treated with a fungicide and was not currently active.

Drains were evident as the plants growing above the free-draining areas were thriving, whereas the green in general was struggling because the surface was wet. Thatch was dense and tight, at >8mm, and retaining moisture at the surface.

The green had not been verti-drained for several years and was compacted. A PWS Soil Analysis (Broad Spectrum + CEC (500g)) was undertaken that indicated that potassium, magnesium, calcium and manganese levels were too low and would require amending.

Iron levels were high, indicating that the previous feeding regime had focused on colour and not taken into account the broader nutritional needs of the sward.

Aeration was identified as a key component in tackling the levels of thatch and the dominance of the mosses. Sarrel rolling was undertaken as often as possible without disrupting the surface and the green was scarified in two different directions to physically remove a lot of the pleurocarpous moss. 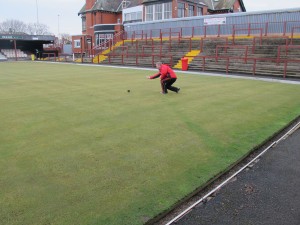 The disparity in the growth rate of the different grasses was very evident on a return visit to the green at the end of March, with the Annual Meadow-grass sitting back and waiting for better temperatures, whilst the Browntop Bent was perfectly content and thriving, as was the Fescue.

This variations in the growth response of the different species, combined with remnants of the damage that Fusarium had wrought on the Annual Meadow-grass, was creating an inconsistent surface causing the wood to chatter over the surface.

When growth was able to mitigate against potential stress, the green was scarified to improve smoothness. Temperature fluctuations between day and night were creating problems with sugars binding to anthocyanins, because night-time temperatures were too low to translocate sugars down into the roots.

A nutrient programme was designed taking into consideration the PWS analysis results. The first granular feed of Maxwell Advanced Foundation 8:0:4 +2MgO + 8Ca + seaweed was scheduled for March, but this was amended in view of the fluctuating night-time temperatures and Mark was advised to apply the liquid feed that was scheduled for April at half rate.

The sward utilised this very well with no evidence of disease. A key indicator of improvement to the green is to reduce the incidence and severity of outbreaks of Fusarium.

Therefore, the first significant nutrient application was composed of a half rate liquid feed - half rate to address the plant's requirements at this stage of the year, based on 4 x 25 litre tanks (100 litres in total) was applied in the last week of March.

A further liquid feed application, again at half rate and of the same formulation as the earlier feed, was undertaken in the first week of May. The green had improved significantly by early May; the pleurocarpous moss had been largely outcompeted without the use of iron.

Small patches of Silvery-thread moss (Bryum argenteum) were still evident, indicating that thatch and moisture retention on the surface is still an underlying concern, but these are long term objectives to be tackled with disruptive aeration during renovations at either end of the year.

Disease, this spring, had been controlled with the implementation of an appropriate nutrient regime in conjunction with regular dew switching.

Flowering of the Poa annua was just becoming evident at the beginning of May, although the green was running very well. Several players have commented that the green is looking better this year than it has for many years. Progressing with Pitchcare's agronomy programme- (photo taken 6th of May 2014).

A further liquid feed composed of a half rate liquid applied - half rate to address the plants requirements at this stage of the year - based on 4 x 25 litre tanks (100 litres in total), was applied in the first week of May.

Prior to a granular application of Maxwell Turf Food Myco 1 (7:2:8), the primary focus of this liquid feed was to continue steady, healthy growth to enable an application of an organic feed at a later date.

The continued use of a penetrant wetting agent was recommended to keep moisture moving through the sward. Higher temperatures and drier conditions were forecast and it was useful to ensure that the water that falls in the intervening time will be kept within the soil profile and not lost to evaporation.

Cutting height is still at 7mm; this will probably reduce as seed heads and speed on the green become an issue, but Mark has no plans to bring it any lower than 5mm.

We will keep the Pitchcare community updated with the condition and progress of the Waterloo green at intervals throughout the season, and keen bowls enthusiasts can watch this year's major tournaments at the Waterloo live and online at www.globegig.com/live-event-room.

The full range of nutrients and soil analysis used by the Waterloo can be found in the Pitchcare Store.