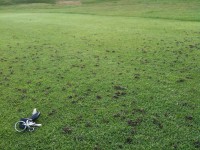 This article looks at which species are pests on golf courses, and examines the current situation regarding earthworm control.

Earthworms present greenkeepkers and groundsmen with a dilemma. On one hand earthworms improve soil quality. Earthworms are important in the decomposition process and nutrient recycling because they eat dead plant material, including thatch. Their feeding and tunnelling activities improve soil structure, drainage and aeration. In addition, their casts are a rich source of essential plant nutrients, including nitrogen, phosphorus and potassium.

On the other hand, surface casting on greens and fairways is a serious nuisance. It can interfere with the roll of the ball, create an uneven playing surface, damage mower blades, smear across the surface reducing water infiltration, encourage weed invasion and spoil the look of the turf. However, not all species cast on the surface and, therefore, chemical control has always been a blunt instrument because it kills all earthworms, not just the surface casters.

Until the early 1960s, casting was a serious problem on UK golf courses and other close-mown sports turf. From about 1962, chlordane started to be sold widely in 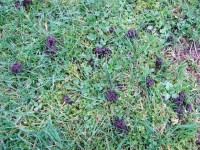 the UK as it proved to be highly efficient at killing earthworms. Chlordane quickly became the greenkeepers' weapon of choice against earthworms and, for thirty years, casting was effectively kept in check.

Chlordane is a persistent organochlorine that binds to mineral particles and organic matter, and has a half-life of about four years in the soil. As a result of its environmental toxicity and its risks to human health, chlordane was banned in 1992. Because of its persistence, chlordane remained partially active in the soil for up to ten years after the ban. However, by 2003, a survey of greenkeepers suggested that earthworms were their most common pest. The chemicals currently available in the UK for controlling earthworms are far less effective than chlordane and have relatively short-term effects. In the last ten years or so, casting has become a major management issue again, with many golf courses reporting that casting is now a moderate to severe problem.

There are twenty-seven native species of earthworm in the British Isles. They can be divided into three ecological groups based on where they live and how they feed. Anecic earthworms are deep burrowing species whose permanent vertical burrows can go two metres down into the soil. The burrow is open at the soil surface and the earthworm will emerge at night to forage for leaf litter, and deposit its casts on the surface.

Endogeic earthworms live in the top 15cm of the soil profile. They make horizontal tunnels that don't open to the surface, and most usually cast in their tunnels not on the surface. They eat soil, breaking down the plant fragments it contains.

Epigeic earthworms usually live in the leaf litter and organic matter at the soil surface, rather than in the mineral soil. They feed on decaying leaf litter and are most common in woodlands, and are rarely found in golf courses.

The most comprehensive research on earthworms on golf courses in the post-chlordane era was the work of Binns, Baker and Pierce, who investigated the factors influencing earthworm populations on fairways at thirty-two golf courses across the UK. Their research was published in the Journal of Turfgrass Science in 1999 (volume 75). Some of their key findings are summarised below.

The average density of earthworms on fairways was 45 per m2, although the highest recorded density was 170 per m2. The three commonest species collected were all surface casters: Aporrectodea longa and Lumbricus terrestris are both deep burrowers, while Aporrectodea caliginosa usually lives in the topsoil. The average number of surface casts was 42 per m2, although the highest number recorded was 119 per m2.

Other species that sometimes occur in moderate to high densities on fairways are Aporrectodea rosea, Lumbricus rubellus and Allolobophora chlorotica, but these rarely cast on the surface, preferring to deposit their casts within the soil profile. The higher rates of casting occurred in areas with higher pH, higher moisture content and more vigorous grass growth.

In the absence of chlordane, or any chemicals that are as effective, many turfgrass managers have adopted cultural control methods. Two management practices in particular can significantly reduce the amount of surface casting.

The first is to reduce the earthworms' food supply by removing grass clippings and any tree leaves. The second is to lower the pH of the soil with the application of acidifying fertiliser. Most species of earthworm will avoid acidic soils. However, the second method needs to be carefully monitored, as the quality of the turf is reduced if the soil becomes too acidic.

A new earthworm pest has recently arrived on British golf greens and bowling greens. Microscolex phosphoreus is a non-native species that occurs in close-mown turf and casts on the surface. Since 2005, there have been confirmed records from at least fifteen localities in England, and many more unconfirmed sightings. It is a small earthworm, 10-35mm long and 1.0-1.5mm wide. It produces small sandy casts on the surface that can be 10-20mm in diameter, and up to about 15mm in height. Although the casts are relatively small compared with those of British species, they are still a problem because heavily infested areas have been reported to have as many as 340 casts per m2. Discussions with turf managers, whose greens are infested, suggest chemicals used to reduce surface casting of native species have no effect on Microscolex phosphoreus, even when applied at the highest recommended concentrations.

In conjunction with Dr Kate Entwistle of the Turf Disease Centre, I am running a project to map the distribution of Microscolex phosphoreus. 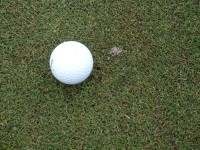 We need your help to discover how far this species has spread across the country. If you have these small sandy casts on your greens, please send a turf sample to the address below. Use a hole changer to take a turf sample containing one or more casts, and send the top 5cm of the core with the grass and roots intact. Place the turf sample in a small plastic container that is strong enough not to get crushed in the post. Puncture small air holes in the top of the container. Ensure the sample is damp but not waterlogged. Loosely pack scrunched-up newspaper around the sample to prevent it being thrown about inside the container while in transit. Put the container in a padded jiffy bag and send by first class post.

Please include the following information: your name, email address, name and address of the club where the sample is from, and date of sampling. The information you send will be treated as confidential. If you have any questions, please contact me by email on dtj@nhm.ac.uk.