0 Rhinos on the charge 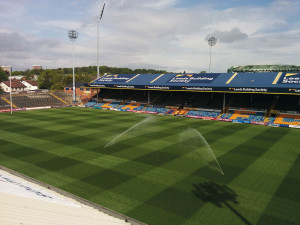 Since 2006, the stadium has officially been known as the Headingley Carnegie Stadium, as a result of sponsorship from Leeds Metropolitan University, whose sports faculty is known as the Carnegie School of Sport Exercise and Physical Education.

What struck me most, when arriving at the stadium, was its location. Surrounded by houses, it's hard to comprehend that this is the second-largest stadium in the Super League with a capacity of 21,500, including both seating and standing areas.

Its set-up is unique, given there are two separate grounds; the cricket stadium and the rugby stadium, with a two-sided stand housing common facilities. The Rugby facilities are owned by Paul Caddick, a local businessman. Consideration is being given to rebuild the (all-seated) North Stand, however, as it is double sided, they require the support of Yorkshire Cricket first as any redevelopment would have to take place on both sides. Talks are underway on this, but there's obviously a lot of planning and decisions for both facilities to consider.

"There is a lot of infrastructure to such a big project," said Ryan. "The undersoil heating cabin needs to be moved and the groundstaff office will be incorporated into the new stand amongst many other factors."

Ryan's journey as a groundsman started at the age of fourteen, when he read a magazine article on Arsenal (unfortunately not Pitchcare) and cheekily wrote to Head Groundsman, Paul Burgess to ask if he could do his work experience at the club. Having completed this and had an insight into groundsmanship, he then went on to join Leeds Rhinos, at the very young age of fifteen, and has worked his way through the ranks from an apprentice, to groundsman, to assistant groundsman, to assistant head groundsman and, finally, reaching his dream eighteen months ago, to become head groundsman - one of the youngest in the UK.

Jason Booth was head groundsman at the club when Ryan started all those years ago: "I had a great bedding in from Jason and he taught me everything… including the art of being resourceful, which is key in this game. I still consider him a mentor and bounce ideas off him."

Ryan now passes on his thirteen years of experience and knowledge to his team of just three; his right hand man, Lewis Pattinson (23), Dan Connor (21) and Leon Pearson (20). Together, they have quite a task as such a small team to oversee the entire running and maintenance of the playing surfaces at both the Stadium and Leeds Rugby Academy. This includes two first team pitches, four academy pitches and one 3G pitch (which also brings in additional revenue for the club). 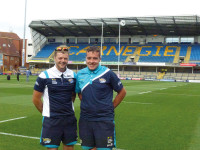 Ryan continued: "Pitch-wise we try to do everything by the book. We have a maintenance plan that we try to stick to as best we can, and an iTurf programme with Everris. The plan allows us to adapt to the challenges we face on a daily basis whilst, in many cases, preventing problems rather than reacting to them. Last year, we used a lot of liquid fertilisers, but that wasn't working as it rained persistently for three months and the plan turned out to be really inflexible. Although you never know what's going to happen, I'd rather spend money on a Proturf application and we're constantly working with Everris as they're good people and keen for us to achieve optimal results from minimal inputs on the fibresand pitch."

Fibresand, a fibre reinforced rootzone, is a 70/30 blend of MM45 medium grade silica sand and topsoil mixed with polypropylene fibre. Its stabilising and free draining properties make it the ideal base for a
natural turf pitch.

The fibre-reinforced surface is made up of perforated pipe drainage at 4m laterals, gravel, sand, Fibresand then turf. Ryan said: "In summer, I have to be really conscious of moisture levels and that's where the Toro Lynx system comes into play. It gives readings of moisture, temperature and salinity at two inches and six inches. In winter, we just have to ensure the surface is open - whether that's by putting the Variseeder across it to perforate the surface or the Verti-drain to open it up. When it came in as turf, it had a thick thatch layer that needs to be harvested and that's built up over time, which is just starting to lay on top of the surface. I've got to punch through and perforate to the sand and fibre layer."

"My biggest challenge, along with every other groundsman I imagine, is pitch renovation and when to fit it in. I had 18 days last year and 19 days this year. To get the fibre content back up, I need to Koro it off and turn it over. I've asked for a total of thirty-five days for the renovation of this, but if I get twenty-eight days I'll be lucky. If I only have 70% grass cover going into the first game, it won't be aesthetically pleasing, but it will play well and the Board support these kind of decisions. The good thing about Leeds Rugby is getting the trust from the Board and this promotes flexibility, both day to day and for long term planning."

"The work will be done by outside contractors," Ryan commented. "We don't have the machinery for such renovations and it allows us to pass on the responsibility. They're the professionals and do it day in day out, so it's better left in their hands. I can prepare a pitch, but renovation is better done by contractors and that's why you budget for it," Ryan concluded.

Ryan's top priorities are obviously performance and presentation. The surface needs to maintain a high standard for the games live on TV but also to consider what effect the pitch has on the players, which impacts on results and potential injuries.

Everyone is encouraged to be hands on and chip in with all tasks, however big or small, to get the job done. For instance, whilst speaking with a passing electrician, he told me he was on his way to fix a broken chair. 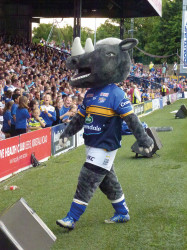 What became obvious whilst walking around the site with Ryan, was the feel of a real family environment. Many of the staff are long standing employees and have grown up at the club. "Sometimes, it's the most frustrating place in the world to be, but on the flip side we get looked after," commented Ryan. This ethos and atmosphere perculates down to the fans, as they make a big thing of entertaining them and making games an experience for the whole family to enjoy. Mascot, Ronnie the Rhino, certainly got the crowd going pre-match, and at half-time the pitch was a sea of children playing games and having fun. Ronnie also visits schools as part of the Leeds Rhinos Foundation project, with the intention of promoting sports and healthy living.

Interacting with the guys throughout the day was a breath of fresh air, as they had so much enthusiasm, energy and commitment to the job and the club. This obviously comes from being such a young team, but also as a result of the time and encouragement given to them by Ryan and the club.

"We're very big on personal progression," said Ryan. "The lads have reviews every three months where we sit down and set targets to achieve. They either get achieved, not achieved or exceeded. These marks are assessed at the end of the year to determine bonuses and/or a wage increase."

Ryan places a lot of 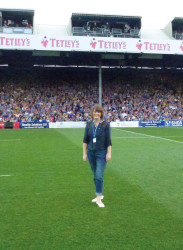 importance on getting young guys into the game and the industry and said: "I went and did a talk at my old high school a few weeks ago, but it's really tough. When you ask the question, 'do you want to come and be a groundsman on low wages for the first five years, work in all weathers, have no life, and probably have an argument with your girlfriend every week amongst many other factors?'... the answer is usually no, hence the reason why it's a struggle."

"As a groundsman, it's not a job, it's a way of life and a lifestyle choice. You never see a groundsman with a six pack. I'm constantly looking at forecasts and taking phone calls etc. The grass doesn't stop growing because it's a weekend, and the lads are expected to put the time in."

Back on the pitch, Ryan told me they struggle a lot with leaf spot but, as it's newly reconstructed, there aren't any pests. The real problem area is foxes. Although the site is in a built up area, there are a lot of woods in Leeds - they get in through the stadium gates and inevitably head straight for the lines to dig them out.

My inaugural rugby match did not disappoint. Standing in the middle of the pitch whilst the 'opera man' sang Nessun Dorma, with some 21,000 fans looking on, was incredible. The stands are on top of you, so the atmosphere was electric and I fully understand why it can be intimidating for both players and referees alike. The end result was 46-18 to the Rhinos, and they have a new fan.

Ryan explained that all the equipment is owned. "We choose not to use finance and buy everything outright so immediately it becomes an asset to the club. We're massive on that and I'm always keen to do it. For any big expenses that arise, I put together a business plan which goes up to the Board. I then keep my fingers crossed for two to three days until I get a response."