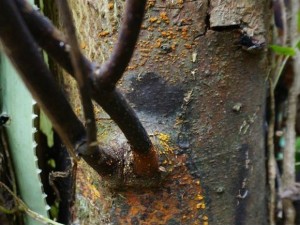 It has also now become widespread across the European mainland since its introduction in the 1930s. In Europe, it mostly attacks sweet chestnut (Castanea sativa).

In the UK, this disease was reported twice in 2011 and once in 2016 on imported sweet chestnut trees. Action was taken in these instances to remove and burn the infected plants and no further infections were found. Unfortunately, it has recently been discovered once again, this time at two sites near Exeter in Devon.

The infected trees were destroyed and a survey for further signs of the disease within 1km of the site was conducted. Further targeted surveys of sweet chestnut trees within 5km of the infection are now underway. Inspections of other plants supplied by the same nursery are also being conducted.

A ban on the import of sweet chestnut trees to the UK has been in place since 2013 due to our status as a protected zone for this disease.

Unfortunately it appears that, despite this ban, a small number of nurseries in the Netherlands have supplied UK nurseries with sweet chestnut trees. Although this has not been linked in any way to this latest outbreak, an investigation is underway by Plant Health authorities in both the UK and the Netherlands to prevent future breaches of the ban.

In addition to this disease, a new pest was introduced in 2015 that also attacks sweet chestnut, the oriental chestnut gall wasp (Dryocosmus kuriphilus). This pest was first discovered in Kent and has since spread to several places in London and South-East England. The combination of this pest and disease on sweet chestnut trees has the potential to be devastating in areas of the UK where sweet chestnut is cultivated for nut production, timber and coppice.

The Plant Health authorities are asking everyone to be vigilant and check any sweet chestnut trees in their local area. Symptoms of the disease can be found on the Observatree website.

If you are concerned about any trees, you should report it via the Forestry Commission's Tree Alert webpage - www.forestry.gov.uk/treealert