Two new pitches and major renovations to the existing ones has kept Ampthill & District Community RUFC's Head Groundsman, Martin Wythe, busy over the past few years. In this article, he outlines the work that has been carried out at their Dillingham Park ground

Situated smack bang in the middle of an imaginary triangle formed by Bedford, Milton Keynes and Hitchin, Ampthill Rugby Club has seen rapid development over the past ten years, propelling the club from the local leagues to the first team being runners-up in National 2 South. The club has seen success not only in the first team; the development side and the extras winning their respective leagues.

Established in 1881, the club has over a thousand senior members in addition to 520 Junior members aged 6-17, which has proven to be excellent for the club's development - approximately half of the current first team have been fed through the junior teams!

Ampthill RFC is proud to hold onto community values, offering a standard of rugby for everyone, with five senior teams and a ladies team.

The current President, Dave Williams, has been a member for fifty years and held the post of president for the past nine years.

As their groundsman, and a contractor in my own right, the club asked me to look at their two pitches and produce a programme of works to improve, what were, poor playing surfaces.

Pitch Flooding: The first task was to stop water pouring from the adjacent road, across the car park and down onto the 1st team pitch. This involved the installation of a 100mm drain and a 3m deep soakaway along the edge of the car park, which solved the initial ingress of water.

Poor Soil: Having taken core samples, it was clear that the soil profile was very layered where enthusiastic volunteers had put varying layers of 'topsoil' over some well draining sand. My initial suggestion was to dig up the pitches - as one can imagine, this was met with some rather sceptical reactions and I was asked to work on a less radical approach!

Until this year, I have worked on aeration, fertilising and topdressing. From week to week, I use a Sisis DP 36 Slitter, but also hire in a contractor to verti-drain bi-annually; once during renovations and again in October or November.

I have a soil analysis carried out annually and fertiliser selection is made according to the report. As and when club finances allowed, we would topdress with sand (60 tonnes per pitch) in order to improve levels and drainage.

These two pitches are located adjacent to the clubhouse. One is floodlit and used for training six days a week, so takes quite a battering, and the other is used on most weekends.

In 2011, with the help of the RFU and many supporters, Ampthill Rugby Club began the construction of two brand new pitches set back behind the clubhouse on Olney Field. 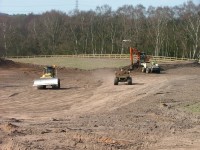 Perched on the side of The Greensand Ridge, the new pitches are set amongst ancient woodland and adjacent to a Site of Special Scientific Interest and Ampthill Park - Capability Brown circa 1771.

All works carried out in this project had to be as sympathetic as possible to the surrounding landscape and wildlife. Close liaison with the Wildlife Trust and various other agencies ensured that these obligations were met and we are in the process of developing a sympathetic management plan for the areas surrounding the pitches; this is likely to include sheep grazing to encourage flora and fauna.

Full excavation of the existing landscape was necessary to achieve a level playing surface This was a mammoth task and took around eight weeks to complete. Works began in early May 2011 and, as we had no facility to water, we were very much at the mercy of the rain gods!!

The RFU's Jim Hacker designed the pitches and the RFU's preferred contractor was John Greasley Ltd. The new pitches were terraced out of the Greensand Ridge using huge 360O excavators, bulldozers and dumpers. Laser levelling ensured a precise construction.

The new pitches had composted green waste incorporated into the construction and TerraCottem was used to improve water retention and increase Cation Exchange Capacity (CEC).

After consultation with the club, Jim Hacker decided to start with a combination of perennial rye grass and smooth stalk meadow grass mix, as this would be a hard wearing and drought resistant combination. We now use a 100% rye grass mix for quick establishment.

Having had the soil analysis back this spring, there is a high phosphate content, which appears to be the nature of the sand, plus a manganese deficiency. I applied a 12:0:6+2% Mn to help remedy these problems. Early in June, I sprayed with seaweed (Maxicrop Triple) to improve root growth and increase microbial activity.

In March 2013, following completion of the pitches, Keith Kent, the RFU Twickenham Head Groundsman, was on a national road trip visiting junior league grounds and we were lucky enough that he paid us a visit. He gave me a rather concerned look upon being told that we had not installed a drainage system of any kind. Concern soon turned into relief when I informed him that we had been blessed with thirty feet of pure sand under the new pitches!

The first game played on the new pitches was in March 2013 (our last league game of the 2012/13 season). This season has been the first full season's use, having had the wettest winter in living memory; the pitches couldn't have performed better. They were never 'heavy' and have suffered very little wear, which is testament to the fantastic drainage.

As the pitches are quite remote from the clubhouse, it is quite amusing to see the reaction of visiting supporters when they get to the top of the hill and look down on the vast natural amphitheatre.

This spring, having the two new pitches to fall back on, the committee felt that they were in a position to allow me to deep cultivate and re-level the original pitches next to the clubhouse.

initially looked at employing the services of a sportsground contractor to laser level these pitches. After receiving quotations for the proposed works, the club decided that, having made a huge financial commitment to the new pitches, this would be a step too far. I proposed to carry the work out 'in-house' and was set the task of bringing together costings and a programme of works.

To overcome the layering, root breaks and consequent capillary lock, I proposed using a local agricultural contractor to initially rotovate to a depth of 300mm and then power harrow overall three times. The aim was to produce a consistent soil profile. Using a 6m power harrow, we reduced undulations and produced a fine tilth. This enabled me to use my John Deere 855 and a bed grader to create smooth running levels. This was never a perfect solution, but cost effective.

Carrying out this cultivation has had the added benefit of removing a growing annual meadow grass problem.

The seed was then drilled using my ancient Gandy seeder. As we have an unusual soil analysis showing a large amount of phosphates, we are again using a 12:0:6 +2% Mn as a pre-seeder. I will also apply seaweed to improve root growth and drought tolerance in mid to late June. 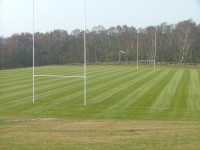 Keith Kent had written up a short report on the club grounds, including this observation: "There is a plan to plough up this pitch if the club can get a grant. It does undulate and run away in the corners and I know that, in Martin, they have a guy who will be able to do a proper good job for the club".

The seed is in, and now our fingers are crossed for a damp start to the summer.

In conclusion, it has been an interesting journey over the past decade, developing the pitches and working with a forward looking and ambitious committee who are committed to maintaining and improving the grounds to meet the aspirations of all our playing members.