0 The anatomy of a golf course - Bunkers 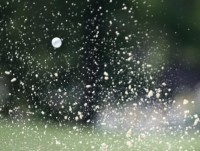 Bunkers were originally created on links land, which would have principally been open farm land or common land, by sheep or cattle finding hollows to shelter from the extreme weather conditions.

The animal hooves would have broken down the turf within the hollows, exposing the sand beneath, thereby creating a bunker. As the game of golf has spread, the bunker has become more artificial in places where the geographical profile is different to the original links land. Now, the bunker is a more formalised part of golf course design and is positioned in order to provide a more interesting challenge for the golfer. As a result of these changes, bunkers now take on many different forms.

The original links courses predominantly use small deep bunkers with steep turf faces which are often revetted, as this helps to keep the wind out of the base of the trap, limiting sand movement. These are known as pot bunkers. A links course bunker is usually an extension or manipulation of a sand dune and, although the sand area itself is rather small, the catchment area which pulls balls into the hazard is very large.

Where weather allows, other types of bunker are present such as the "Amoeba shape", popular during the 1970s and 1980s, or the rugged looking torn edged bunkers utilised by some of the more prominent architects of today.

Waste bunkers are common on resort courses in hotter climates as the lines are blurred between natural desert landscapes and manicured features. Waste bunkers have also been incorporated into other landscapes, including links and parkland courses, as they appear to be more natural looking than the clean lined edges of the traditional bunker. Waste bunkers are areas of compacted sand that help shape the aesthetic attraction of a golf hole, as well as providing a challenge to the golfer. They can be planted up with indigenous species and this helps them to sit more comfortably within the golf course. Torn edges are also a feature of this type of bunker, as the ripped edge makes the bunker look more like a scar of exposed earth rather than a regimented and manicured feature.

Parkland courses tend to utilise the structured feature with soft curved edges. These appear attractive aesthetically and are relatively easy to maintain. As the parkland course is a less typical place for a sand belt to exist, there is far more scope for creativity, as the sand feature is already an anomaly; some interesting shapes can be created. In this situation, the architect has to be careful to design a

n interesting set of hazards whilst also maintaining an association with the surrounding landscape.

Amoeba features, set within manufactured mounding systems, were an attempt to recreate a natural feature in an unnatural landscape, and the results, although attractive, are tailored landscapes which can often appear alien to a natural landscape and may no longer be desirable.

Carry bunkers are placed short of the landing zone, and often on the side of the fairway that would be preferable for the approach shot to be played from, challenging the golfer to play over it in order to gain an advantage. A badly placed carry bunker can be too close to the tee, penalising poorer players twice for a badly struck ball. The loss of distance is bad enough for the less able golfer to lose shots; they shouldn't also have to play that shot from a bunker. To prevent golfers who hit short distances being repeatedly caught by a carry bunker the placing of the tees should be organised to create a well defined landing zone or, where this is not possible, a secondary landing zone short of the defined area which will mean that the shorter hitter will play clear of the hazard in the second shot.

Target bunkers are placed beyond the landing zone and, like the carry bunker, are usually placed on the side of the fairway that provides the best angle of approach. A target bunker should be menacing in appearance, in order to challenge the golfer to play as close as they dare, and should be at a length that the longer hitters can look to play up to or past.

Catch bunkers are used as a buffer between a safe place such as a green, and an unsafe place such as a tree line. Catch bunkers are designed to give the golfer half a chance of making a relatively safe recovery from a bad position, and they also help to prevent balls being balls. Therefore, it is important that the area around the catch bunker is well maintained so the tree line does not extend towards the bunker and, therefore, remove the buffer it is supposed to provide. It is considered unfair to create double hazards where the green cannot be accessed from the bunker due to an overhanging or badly placed tree. This can be altered by a tree removal scheme, earmarking trees of merit to maintain and let grow to their fullest and most attractive, whilst removing trees which are less attractive, non indigenous, or interfere with the overlying strategy of the golf holes.

An approach bunker is usually placed within 50-100 yards of the green, and challenges the second shot on a Par 5 and longer Par 4 holes. It also helps to dictate the position of the greenside features. Usually more imposing in size and depth than the standard fairway feature, the approach bunker can be placed to create optical illusions.

A good example of an approach bunker is on the 10th hole at Augusta National.

The bunker in the approach is placed just before a hidden dip, three-quarters of the way through the hole, creating the impression that the cavernous feature runs up to the front edge of the green, when in fact it lies some 100 yards short. This makes the approach shot appear shorter and much tighter than it actually is. This sort of illusion can be created on a smaller scale by building up the face of the approach bunker to reduce the visibility of some of the green surface to the approaching golfer.

Finally, greenside bunkers are the linchpin hazards of the typical golf hole, as they dictate the overlying strategy, as the position of the greenside hazard reflects where the best approach shot can be played from and, therefore, where the fairway and approach bunkers should be placed. They are usually the deepest hazards on the hole, as the ball has to travel a far shorter distance on exit in order to find the putting surface than it does from approach or fairway hazards, which have shallower faces to allow a longer shot to be played.

Before the strategic trend of golf course design, bunkers were mainly penal in their positioning. Hazards were either placed down both sides of the fairway, punishing any errant drive, or across the fairway at one set distance. This style conflicted with the strategic model of rewarding the golfer's accuracy of direction over raw distance.

The penal method of placing bunkers across the fairway line (figure two) meant that mainly shorter hitters would be caught by the hazards. Many penal bunker complexes still exist and can be worked into a strategic hole with some adjustments.

Technological advancements have altered the importance and positioning of many bunkers. Bunkers which were once target features are now in the landing zone, or even short of the landing zone, as equipment technology has advanced. This means that some holes can be misinterpreted by modern golfers.

Many bunkers are also being removed, typically older carry bunkers which are no longer a challenge to drive over, or are only harming the poorer golfer, creating a disproportionate advantage for the better player. Many golf holes are becoming bland and featureless as bunkers are removed from these positions, creating many straight away drives. 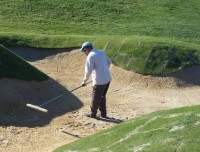 It is possible to consider reinstatement of these features, especially when visual and playing interest can be greatly improved with some small alterations. Most of the time, bunkers that are no longer feasible for the modern game can be simply pushed further down the fairway. In other cases, they can be replicated in a different position, depending on what best suits the surrounding landscape. Many architects of the older courses used pre-existing features, such as knolls and mounds, to adopt to form bunkers helping them to fit comfortably within their surroundings. This practice should be adopted, where possible, to create a semi natural impression.

Technological advancements within the maintenance of bunkers have also changed the shape of the bunker. Although it is not a universal practice, with many courses still using hand rakes, sit on bunker bikes are used to rake the bunkers. The shape of the bike and its turning circle then dictates the size of the base of the bunker. The bike also requires access, which means that at least one face of the bunker needs to be shallow enough for the bike to enter and exit.

Principally, the bunker has to be large enough for a golfer to stand in the sand and play a full shot from the centre. If the sand within the bunker has been correctly laid, and there is a sufficient bowl shape, the ball should almost always come to rest in a flattish area in the centre of the bunker. 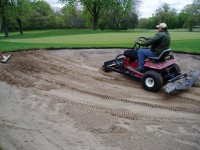 The ideal sand profile should consist of two inches of sand laid and compacted across the whole surface, with another two inches laid on top in the central playing area. This way, a ball will only plug if it hits the very centre of the bunker without a previous bounce, and rolling balls should run in and cross the compacted area before coming to rest in the centre portion.

Depending on the location of the bunker, drainage may be required. On links courses and dry sandy sights, it is possible to have free draining bunkers but, in other cases, due to the collective nature of a well designed and built bunker, drainage will be required. Solutions include a channel to a central drain, or an outfall, or a soakaway beneath the bunker.

This article has discussed all the elements that Andy Watson considers when designing bunker into a golf hole. This is part two of four in Andy Watson's series on the Anatomy of a Golf Course. Article one, in the August/September edition considered the teeing ground. Article three will look at Andy's approach to designing a golf green.

Contact Andy Watson Golf Design for help on your next project: www.andywatsongolfdesign.co.uk