1 The Lizard Orchid - one of the UK's rarest plants

There are many extraordinary plants in the UK and, arguably, one of the most extraordinary families is the orchids. Often mimicking other wildlife - bees, flies, butterflies, frogs, and even monkeys and men, the orchids have incredible flowers that have often evolved to attract unsuspecting insects to 'come and play'.

Of this family, one of the rarest in the UK is the lizard orchid (Himantoglosssum hircinum), a truly magnificent plant - although the whiff of goats will never be too far away! The lizard orchid is, in fact, rare not only in the UK but across Europe, with most populations being found in France and Spain. 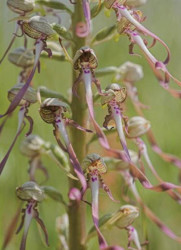 The lizard orchid was first discovered in the UK in the 1600s by Thomas Johnson, an apothecary whose main stomping grounds were in Kent and London. Johnson often travelled in large parties of plant collectors, and he was, by his own admission, 'addicted to the study of medicine', which meant the need to search for rare plants.

His writings often included the descriptions of hearty meals and ale drinking, which fellow companions strained to keep up with. In fact, other commentators of the time considered his behaviour as vulgar and unbotanical. I fear he was a man after my own heart, not only in seeking out rare plants!


Distribution and rarity
In the UK, populations of this species are restricted to around twenty sites, with at least six of these being found on golf courses (it is thought to have been spread around suitable courses by seed on the clothes, clubs and shoes of unknowing golfers!).

According to the Botanical Society of the British Isles (BSBI), the lizard orchid is restricted to the south and east of England. Populations occur in Kent and Sussex (at about sea-level, often on golf courses), Somerset, Devon, Gloucestershire and the North and South Downs. In fact, one of the most impressive populations of this rare and beautiful plant is on the Open course, Royal St George's Golf Club at Sandwich in Kent.

The rarity of the plant means it is listed as a protected species on Schedule 8 of the Wildlife and Countryside Act 1981, and is classed as nationally rare. It also appears as a listed plant on internationally designated Special Areas of Conservation (SACs), for certain habitat types.

In terms of ecology, lizard orchid prefer soils with a high pH 8+; open calcareous grassland, scrub edge and sand dunes. It is at its northern-most limit in southern UK, preferring a more Mediterranean climate. It has been suggested that this species will begin to move further across the UK as climate change occurs. However, there was a notable boom in this species around the 1920s, and research at the time suggested that it was increased rainfall that caused the increase. The work showed that two successive wet growing seasons, that were not followed by a severe drought, were required to produce viable seeds.

Generally, it is thought that weather conditions are important for the success of this species. Less severe frosts and increased rainfall in autumn and winter, without a severe drought in the spring, will favour flowering, seed production and, therefore, expansion of range. This suggests that 2011 would have been a bad year for lizard orchid (severe winter weather followed by a spring drought).


Life history
The Lizard orchid is a perennial species growing from underground tubers. Leaves are produced in autumn and usually die-back at flowering. Flowering usually takes place from May to early July, and the seed ripen on the plant in July (generally, flowering in the UK is seen in late June to early July). The seed, as with most orchids, is very small and can be blown long distances, but they can also stick tightly to slightly moist surfaces, hence the use of golfers clothes and shoes for dispersal.

The flowers are impressive, with the lip or 'labellum', having a long central lip extending up to 7cm, with two side lobes, which look like the legs and tail of a lizard (hence the name!). It has also been suggested that the twisted lip and lobes look like a lizard 'diving' into the flower (actually the hood-like sepals). Further, the name from the Greek himas means strap or thong and glossa means tongue, suggesting alternative names (thong orchid perhaps!). In addition, the flowers give off a goat-like odour, particularly in the evening, hence the species name hircinum, which is derived from the Latin for goat-like.

Pollination of lizard orchid is by insects, and certainly bees have been shown to visit flowers. It is likely that flies also visit, given the strong goat-like smell.

In common with many orchid species, lizard orchids have evolved sophisticated techniques to ensure pollination. In most 'ordinary' flowers the pollen is in the form of loose dust. In the lizard orchid (and others) the pollen is in two discrete masses called 'pollinia'. The pollinia are attached to short stalks which are, in turn, attached to a sticky pad. In the flower, the sticky pad is protected by a thin membrane. When an investigating insect brushes its head against the sticky pad, the membrane is broken and the pad is stuck onto the insect's head, the 'glue' hardening within seconds. The insect will then visit other flowers, passing the pollen on as it goes, to ensure cross-pollination. 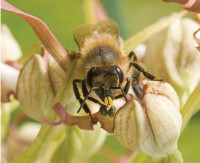 The main reasons for the plants rarity were suggested in research carried out by Cary (1999 - Watsonia 22). The research considered the fate of 201 populations since the 1940s as follows:

"Of the 201 populations recorded, the fate of 73 can, at least partly, be deduced from details in the record. Sixteen populations can be considered extant, forty populations or large parts of populations were picked or dug-up by collectors, six populations died out because of disturbance to the habitat, e.g. ploughing, four were built upon, three became overgrown, two were mown and one was trampled and/or grazed by horses."

Curiously, the earliest population recorded was lost in 1641 due to the road becoming wider (Pearsall & Hall 1933 - Report of the Botanical Exchange Club, Manchester.). This surely must be the first recorded damage caused to rare wildlife by road improvement.

An interesting fact is that the main loss of populations in this time was plant collecting, a fate suffered by many orchid species due to their incredible flowers, which is certainly a wonder of evolution and an obvious temptation to what is now a keen predator - humans!.

Unfortunately, it appears the population discovered by the 'ale loving' Thomas Johnson was lost to development (in 1641, no less), an unfortunate reflection of the terrible losses seen to the bulk of our wildflowers and animals over the last 150 years. In fact, as incomprehensible as it may seem, it appears that, if our present government has its way, further loss to our already rare wildflower meadows may soon be seen!

If you would like to speak to Dr Hampton about Lizard Orchids or any other ecological matters he can be contacted via e-mail on markhampton@peakecology.co.uk