0 The youth of today eh!

The North West of England is home to five top flight teams. But what is life like for the region's lower league groundsmen who can only dream of the extensive budgets available to their lofty neighbours? Lee Williams visits four such clubs to find out; the second article takes him to Tranmere Rovers being maintained by two teenagers.

The departure of Tranmere Rovers head groundsman left the Prenton Park pitch being maintained by two teenagers. But, as Lee Williams discovers, the two lads are both competent and ambitious to succeed. 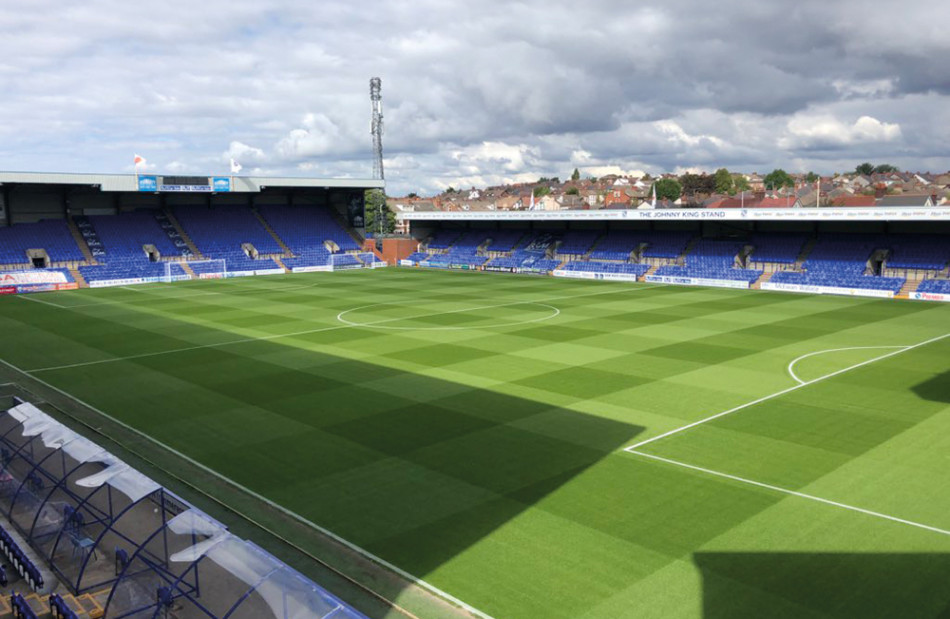 Tranmere Rovers Football Club is a professional association football club based in Birkenhead, Merseyside. Founded in 1884 as Belmont Football Club, they adopted their current name in 1885. They were a founder member of Division Three North in 1921 and were a member of The Football League until 2015 when they were relegated to the National League, the fifth tier of English football. On 12th May 2018, they beat Boreham Wood in the 2017-18 National League play off final to regain their status as a Football League member.

Prenton Park is the home ground of Tranmere Rovers FC, Liverpool FC Women and Liverpool FC Reserves. Its main tenant, Tranmere Rovers, moved here in 1912. The ground has had several rebuilds, with the most recent occurring in 1995 in response to the requirement of the Taylor Report to become all-seater. Today's stadium holds 16,587 in four stands: the Kop, the Johnny King Stand, the Main Stand and the Cowshed (for away supporters).

Attendances at the ground have fluctuated over its hundred-year history. Its largest-ever crowd was 24,424 for a 1972 FA Cup match between Tranmere and Stoke City. In 2010, an average of 5,000 fans attended each home game.

I arrive at Prenton Park on a rather chilly and windy day. Outside the club shop, I first meet up with Callum Robinson, eighteen years old, one of two young groundsmen who tend to the pitches at Tranmere. After a brief walk through the stadium, we walk out onto the pitch, where I meet Aaron Wilson, eighteen years old (groundsman) who was divoting away. After a brief chat, we leave Aaron to carry on the good work whilst Callum takes me for a walk around the facilities before we sit down for a conversation in the media office that overlooks the pitch. Callum and Aaron have both worked at the club for a year and a half. Callum tells me they both studied sports science in the college which is based in the North Stand of the ground. From the stand, they would see the groundsmen working on the pitch.

"I would stay behind after class and watch them work, I was always interested in how they put the patterns on the pitch."

On a careers day at college he was asked what he wanted to be in life. "I told them I would like to try being a groundsman, so they put me on a day release here. I started by cleaning the linemarkers and machinery. I then moved on to the Honda rotary mowers cleaning up the debris on the pitch. Whilst on the Hondas, I thought 'yes, I am really into this'."

Callum then started to do volunteer work on the pitch on match days, working with the groundsman, and this is when he took the opportunity to ask if there were any jobs available. Luckily for Callum, they were looking for an apprentice. This gave him the opportunity he was looking for and he has not looked back since.

Aaron got his opportunity through Callum "He asked me if I knew if anyone was taking on for the summer. I suggested he came here to help us out. He did that and ended up on the same apprenticeship as me, and it has worked out well for him."

They have both recently started working towards an NVQ level 2 in Sports Turf Maintenance at Reaseheath College and would like to get their spraying certificates soon. 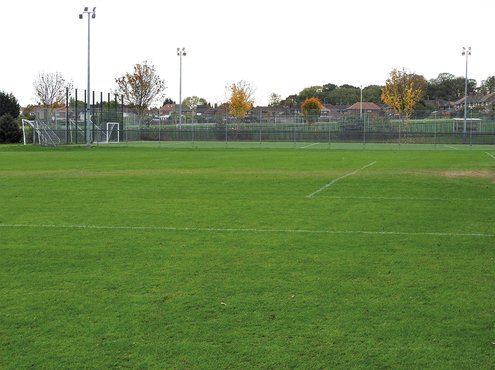 There is no Head Groundsman or an experienced groundsman for the two young lads to lean on as they have both left the club in the last twelve months. This has left Callum and Aaron to tend to the pitches by themselves.

Callum explains; "It's hard with just the two of us, but we get on with it. We decide every morning between ourselves on the appropriate work for the day. This seems to work as the pitch is still in good condition."

Callum believes they are pretty clued up as the old head groundsman taught them quite a bit in the short space of time they worked with him. He also goes to work with the grounds team at Liverpool FC on a match day when he can and seeks advice and tips from their Head Groundsman Dave Roberts. "It's nice to have someone willing to support you and who you can turn to, to ask questions."

Karl Standley at Wembley Stadium also invited him to work a matchday, which has helped him with his learning process, and he will always be grateful for the opportunity.

The Prenton Park pitch has a heavy fixture list to contend with. I visited the ground on a Wednesday at the end of October. In that week, they had a game that evening, but also just had a game on Saturday and Tuesday night with more games to follow on the coming Saturday and Sunday. 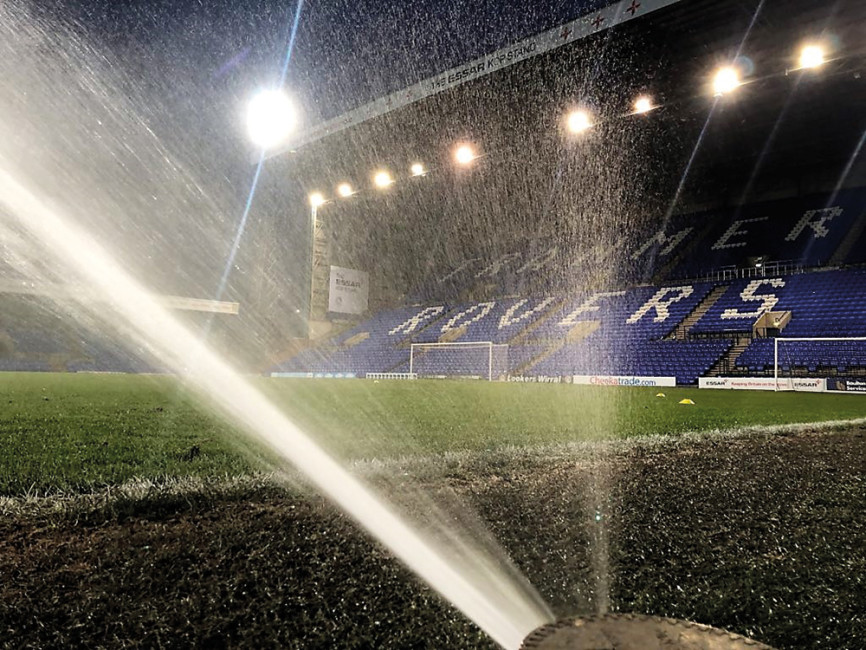 "We have had around twenty-five games so far this season, plus one training session. That's a mixture of first team games, cup games, youth cup games and Liverpool ladies who also use the pitch."

They have also just had two fireworks displays which caused some minor scarring and burns to the pitch, but they will recover in the next few weeks with a little care and intention.

The stadium pitch is a Fibresand construction that is over twenty years old, together with an old automated irrigation system. When it comes to maintenance of the pitch, the lads like to keep it simple, carrying out a regular programme of works.

"Coming into the winter months, we will double cut and mark out before a match. During the week, the pitch will be cut twice a week, rotary and divot after a game. We will also have a contractor come in and verti-drain the pitch once a month at a depth of 8 inches. In between this, the lights will go on as much as possible."

"The club invested in four second-hand SGL MU360's 600-watt rigs last season from Everton. They help keep grass cover under the North stand and are utilised in hard-worn areas of the pitch. Unfortunately, we have been having trouble with one or two of the sockets so, at present, we can only get three rigs on at a time."

To try and keep games on when the winter months set in, they have a set of frost covers to cover all the pitch. 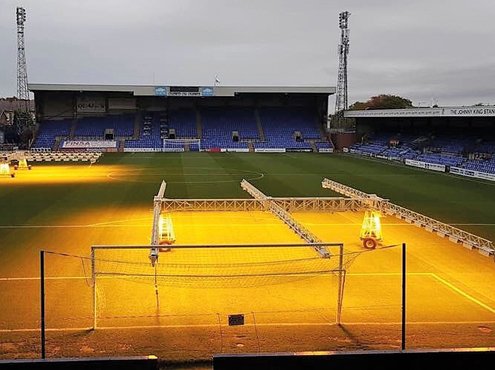 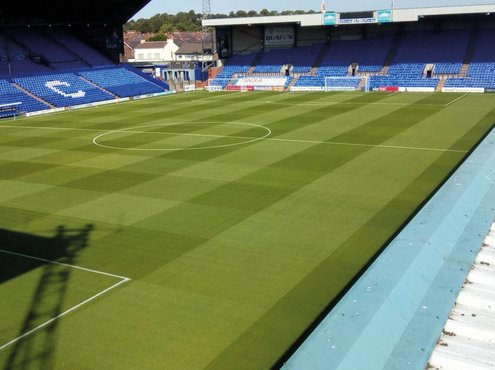 Not only do Callum and Aaron have the Prenton Park pitch to tend to each day, they are also responsible for the upkeep of twelve rootzone and soil-based community pitches located next to the stadium, which they must cut using the fairway mower and mark out for games. The academy teams and college utilise these.

"It's tough! Originally, there were only four pitches, but they recently took on another eight, adding to our workload," comments Callum. It doesn't look like they will have any extra help anytime soon either.

Callum is hopeful the club may invest in a new Desso pitch next season, to help cope with the heavy schedule. This has been talked about as the club have just signed a 3-year deal with Liverpool FC Ladies to play all their fixtures at Prenton Park. He would like the addition of a few SGL MU18 rigs as they are lighter and more mobile, making it easier for them to spot treat areas of the pitch, but obviously this comes down to what budgets are available. Machinery is another area he would like the club to invest in eventually as they would want to be more self-sufficient.

In the future, Callum tells me he would love to work for Liverpool FC as a groundsman at any one of their sites; he is a big Liverpool fan.

After what I have seen today from both Callum and Aaron, I can only commend the work they are doing and their commitment to the job. If they keep it up, I'm sure they will go far. Good luck in the future lads.