0 "This is the worst vandalism I’ve ever seen" 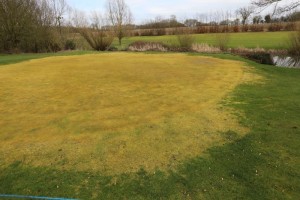 The owner of a Cambridgeshire golf club has said an attack to fourteen of the course's greens is the worst case of golf vandalism she has ever seen.

Vivien Saunders OBE, who won the Women's British Open in 1977 and is chair of the Association of Golf Course Owners as well as owner of Abbotsley Golf Hotel and Country Club, said she thinks a banned weedkiller was applied to fourteen of the course's greens, wiping out twelve of them.

"I have suffered the worst case of vandalism ever at a UK golf course," she said, "apart perhaps from Dunston Hall when the irrigation tank was tampered with."

Saunders said she thinks the herbicide Casoron G, which was banned in 2010, was used.

"It was applied to fourteen greens with a drop spreader, totally wiping out twelve of them," she said.

"Research shows this weedkiller can stay in the ground for five years."

"The estimated cost of re-turfing the greens to get them back into play as soon as possible is over £350,000 with an extra greenkeeping team. Our insurer has conceded that the damage cover is £100,000 per incident. We have loss of earnings cover for two years and some of the cost of the repairs will have to come from that."

Saunders said other golf clubs should consider switching to an insurer that offers more coverage for course damage.

"Take it from me - you may need £250,000 cover for damage. I have contacted our insurers and suggested that they now offer courses the option to pay extra for additional cover - say £500,000 - and call it an 'Abbotsley clause'."

It's not yet known who carried out the attack. Saunders said the club has recently been in dispute with some neighbours over a right of way issue.

"Look at the pictures to see what a disaster you could face from neighbours from Hell or even a disgruntled ex-employee," said Saunders. "It isn't pretty."

Pitchcare contacted the club who told us that they were currently only able to play a loop of nine holes. They estimate that the damaged greens will not be back in play until at least May 2018.

We wish them well with their efforts.