Moving to a purpose-built new ground and clubhouse at Doric Park, heralded a dream season for Trowbridge RFC. The Wiltshire club achieved promotion to level six in the South West League and ended on the hallowed turf of Twickenham in May where they won the RFU Intermediate Cup.

Early one May Sunday morning, twelve coaches rumbled out of Trowbridge RFC's sparkling new ground at Doric Park carrying supporters to Twickenham where their team was to meet Leek in the national RFU Intermediate Cup Final. After eighty nail-biting minutes of rugby, they were not disappointed. As the famous stadium echoed to Wiltshire and Staffordshire voices, the thrilling match was brought to a successful end for Trowbridge when, despite lots of action from both sides, they managed to hang on to their slender three point lead until the final whistle: Trowbridge 22 - Leek 19.

Trowbridge's coach, former England and Bath player, Steve Ojomoh, who had not touched a drop of alcohol all day so as to savour every moment, was so overcome by emotion after his side's win, he had to take time out alone for a few moments to regroup. "We would never have been in this position if we had still been at our old ground in Green Lane," said club finance and admin director Chris Lamb. "We were going backwards with not enough capacity. We only had two pitches, and one of those was used for training. During summer, we had to hire from schools because we had to save what we had for the season."

The move to Doric Park, Hilperton was just what they needed to kick start the club. "To say that the new ground has re-energised us is almost an understatement," he added. "It was a fairy tale season."

But, like that cup match at Twickenham, the transition was an exercise in tenacity. It took ten years, a whirl of fund-raising during a recession and frustrating planning applications to achieve the move. Doric Park is a landscaped, purpose-built ground boasting a state-of the art clubhouse, built by Ashford Homes, which overlooks the stadium pitch, a floodlit pitch, a further two pitches and 12,000m² of training areas/mini pitches on the twenty acre site. It is neatly fenced, with artificial turf walkways - using Superverdeturf from Verde Sports over a Pro-Play shockpad - which were added later to keep everything tidy between changing rooms and pitches.

"Playing on a billiard-table surface, as ours is, has spoilt them for other clubs' grounds," continued Chris, "but it is a nice problem to have. Now we've played at Twickenham and the players felt that our surface was every bit as good as theirs!" 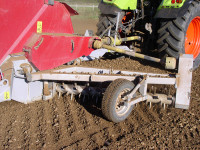 Trowbridge RFC, which was founded in 1931, had been at its old Green Lane site since 1963. Since 2009, it had used local sportsturf maintenance contractor, Ecosol Turfcare, to carry out end of season renovation and put in secondary drainage. "But we were struggling," said Chris. "The game of rugby was dying on its feet as we did not have the capacity or ground conditions we needed." In 2010, the club asked Ecosol to put in a tender for a brand new ground on the other side of the town.

"We helped them design a specification appropriate for the new development on arable land at Paxcroft Farm," remembers the company's MD, Bretton King, "and, following a competitive tendering in mid 2012, we heard we'd been selected. It was a tight deadline, as the first ball was to be kicked on the new pitch on 1 September, 2013. At that point, we were looking at twenty acres of prime Wiltshire farmland needing to be sprayed off and cultivations started." The inevitable planning delays occurred and it was not until 28 August 2012 that the reconstruction was able to begin.

One of the planning considerations called for the construction of a large earth bund on the south and east boundaries. When it came to forming the pitches, construction had to contend with limitations imposed by archaeologists who insisted on the protection of a Bronze Age settlement underneath the location of two of the pitches. 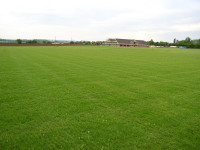 "They placed restrictions which prevented any excavation deeper than 250mm. Consequently, we stripped the topsoil off the bund area and used it to build up the levels on pitches 1 and 2, rather than risk any delay or site closure," said Bretton. Those two pitches were laser-graded and the third one bar-graded. Following a thorough stone burying and picking operation, sand amelioration was carried out to the tune of 700 tonnes on Pitch 1, 500 tonnes on Pitch 2 and 300 tonnes on the training area/pitch 3.

The lack of organic matter in the soil sample also meant the addition of PAS100 compost during amelioration, with the plan to sow the grass seed by 20th September 2012 at the latest, for establishment before winter. Unfortunately, the weather broke, heralding one of the wettest winters on record. The seeding couldn't be done and work on the earth bund slithered to a halt. "We were frustrated and concerned that missing autumn seeding would mean the pitches were not going to be mature and well-grassed enough for play the following September," Bretton added.

It was not until 8th April 2013 that conditions became right for seeding the pitches and work on the bund restarted. The grass was up within two weeks, but an exceptionally dry April and May prevented prolific growth. It wasn't until the June warmth that the new grass began to knit together, only to be met with a drought in July which brought growth to a standstill once more.

"It was a frustrating time and a bit worrying as we were only weeks away from the first games, but we were reassured that all the necessary groundwork had been done and we remained patient," said Chris Lamb. 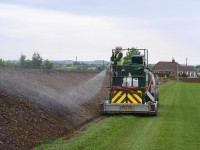 Seeding the grass bund called for specialist equipment to handle the steep slope and need for low maintenance grass cover. On 20th June, CDTS Ltd from Malpas, Cheshire came in with a hydroseeder, using a high pressure hose, and deposited a DLF ProMaster 25 blend of Fescues, Bents and Crested Dogstail with a Browweb tackifier that helped the seed stick to the bank, combined with an 8:7:7 organic fertiliser.

Everyone's patience was rewarded when rain arrived in late July and the grass took off. The pitches were marked out, post sockets installed and, by 28th August, the pitches were ready for a pre-season friendly. "We were delighted," Chris said. "The work was what we had come to expect from Ecosol; high quality and magnificently professional at all times, with relentless attention to detail. Bretton encouraged us to regard pitch construction and maintenance as an investment, not an overhead."

The club had managed to obtain some funding from Sport England to put in the six acre floodlit training pitch which was designed and specified by Sports Turf Consulting from Fairford, Gloucestershire. Ecosol seeded that in mid October 2013 and it was growing away before winter set in. 2014 started with a celebration for Trowbridge which set the scene for their magical season. On 4th January, hundreds of players, guests and dignitaries attended the official opening of the clubhouse, where they were addressed by Bob Reeves, RFU President. "I am honoured to be here for this occasion," he told the crowd, "to witness the opening of a facility which will benefit the community as a whole, not just rugby."

The clubhouse, with its two bars, airy spaces, terrace and impressive changing rooms, has been booked ever since," Chris Lamb said. "We have had to become totally professional about hiring it out. It's popular for weddings, parties, wakes, bridge, even a seance and, sometimes, it gets difficult to juggle that with the rugby commitments, but it's a great problem to have. The Doric Park ground brought about a renaissance for the club and now we're doing the same for the town of Trowbridge."

Ecosol Turfcare retained the contract for ongoing maintenance, alongside groundsman Nobby Knight, and will sand-slit during the close season. "As I look out at it sparkling in the June sunshine," continued Chris, "it doesn't look as if a game of rugby has ever taken place on it, and that's after the wettest winter on record. During our first season at Doric Park, we only postponed two matches and that was simply to protect our investment. Not many clubs in Dorset and Wiltshire could say that."

In the run-up to the Twickenham triumph at the end of this season, Trowbridge continued to blossom. They won the Dorset and Wilts cup and, in April this year, beat Aylesbury 27-19 to win the Southern Counties play-off and gain promotion to Level 6. "We have plenty of youngsters coming through and a great coaching set-up," enthused Chris.

Success breeds success and now everyone wants to be associated with Trowbridge RFC. It is attracting sponsors, visitors, new members and running a fourth team next season. "Both social and playing membership has increased by at least fifty percent over the past year," confirmed Chris.

"We hoped the players would up their game to match their new facilities, and they've done that with room to spare."