0 Trying to make his Mark

After an early start and a long drive from Oldham, Lee Williams pulls up outside Rodney Parade Stadium situated in the centre of Newport, South Wales. At the time of writing this, Newport have just reached the fifth round of the FA Cup. Lee met with Mark Jones, Head of Operations, to discuss developments and his time at Rodney Parade. 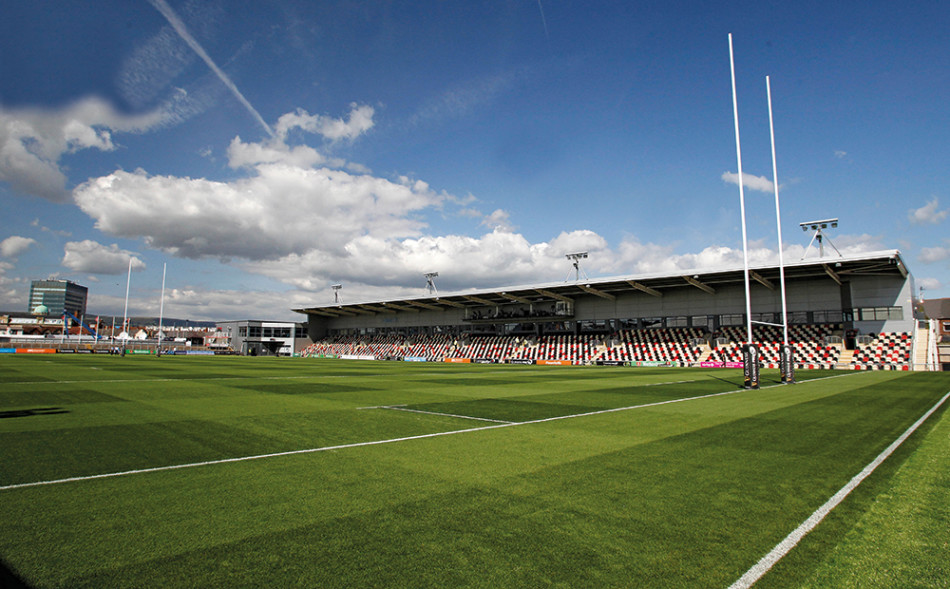 We head to a local coffee house, Hortons, which Mark regularly frequents to take a break from his hectic schedule, and he tells me that, when he left school, his first thoughts weren't to become a groundsman and manage his own ground; like many of us who end up in the turfcare industry, fate led him here. "When I was fourteen, I signed with Sheffield United FC to be an apprentice footballer, however, it was short-lived as, at sixteen, I was promptly released and the dream of being a professional footballer vanished. I returned home knowing I didn't want to work in an office or factory and was adamant that I wanted to work outdoors. Before too long, I managed to get a job at a local golf course, before swiftly following my passion of football with a move to Cardiff Athletic Club. It was here, at just nineteen, I was approached about the position of grounds manager at Newport Athletic Club. At such a young age, the opportunity was brilliant; the position came with a three bedroomed house, however there was a big but; I didn't want to leave home! My boss at Cardiff, Albert Francis, immediately told me I had messed up and that I should take the job whether I wanted to live in the house or not. I quickly realised my mistake, only to be told by the club secretary that they had already appointed someone else. The funny thing was, the job was already sort of paved out for me and they took me on. So, in 1985, I joined with excitement about the future ahead and the rest, as they say, is history. Back then, it was called Newport Athletic club and I was responsible for the maintenance of the cricket field and square, grass hockey pitches, grass tennis courts, bowling greens and rugby pitches which provided a great variety and foundation for all things turf."

Mark's role at the club has evolved over the thirty-four years he has been at Rodney Parade, and he has gained a wide range of qualifications to support the varied roles he carries out as the Head of Operations. "I took lots of my turf qualifications early on. I have done lots of Stadium & Safety Management courses as I oversee all the stewarding and safety procedures on site. I'm also responsible for all capital expenditure budgets, special projects, bars, catering, cleaning and pretty much everything else."

Mark has three groundstaff, who work tirelessly on the pitch doing their best to cope with the heavy fixture schedule. James Stuart, Head Groundsman, who has been at the club for about twenty-six seasons, Jon Raymond, Grounds and Facilities Supervisor, eight years' service and Josh Edwards, Groundsman/Maintenance and Response Team Supervisor on match days. 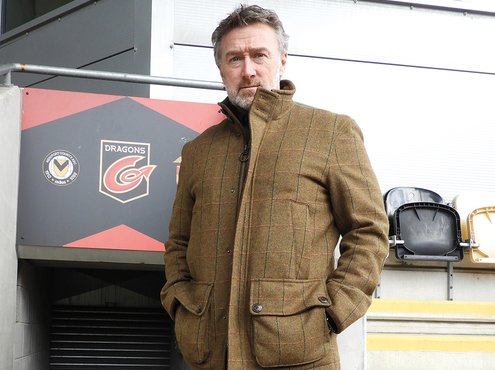 It's fair to say that Rodney Parade has had many critics over the last few years, when it comes to the playability of the pitch in winter, and this was no different recently when they beat Middlesbrough in the FA Cup replay. But, with a League Two football team and two rugby teams playing their league matches, plus added pressure of cup games and youth cup games on the pitch over a season, you can clearly see this gives Mark and his team a massive challenge at any time of the year.

"The original pitch was natural grass with drainage installed in one half, and I had a minimal budget to work with. The football came over to us seven years ago, so now do the maths; three teams, two of them being rugby, brings me over seventy fixtures a year and you can't do that on a pitch that is not built to do it."

It's early February and, in my opinion, the pitch isn't looking too bad. Especially given there have been over fifty fixtures so far this season, with some not played in preferred weather conditions. Mark commented on the recently installed Desso PlayMaster hybrid surface. "When we were taken over by the Welsh Rugby Union, we were lucky to get the Desso system (complete with a full irrigation system), as they realised straight away the pitch we had wasn't fit for purpose. They went into the market and did their research before they pressed the approval button. They felt the PlayMaster would be best for us and was laid for the start of last season - I believe it's got about a three year shelf life. We have seen a big difference since it was laid, which is a testament to the performance of the carpet as, last year, we managed to get to the end of the season with grass cover. But, we still have our problems; at this time of year, we suffer from shade under the main stand and compaction at the very top of the carpet, purely down to the vast number of games." This prompted me to ask if he had considered lighting rigs to help with the shade issues. "I don't think there is the budget for lights. I'm always envious as pretty much every ground you see these days on social media has them, and I see people still cutting in January - even taking boxes of grass off their pitches. Honestly though, if we had them, I feel by the time we got them out we would be taking them off again because the next fixture would be coming." 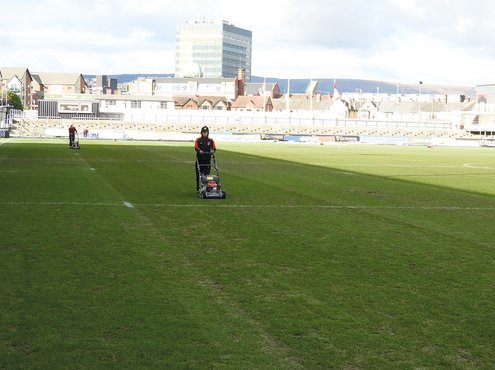 Whilst at the stadium on a cold Monday morning, the lads were on the rotaries cleaning up the pitch from the weekend's fixtures in preparation for another fixture on Tuesday night. I asked Mark what maintenance he carries out in such a short space of time between fixtures? "To be honest, I think it's absolute dedication from my groundstaff. I can only imagine what it's like for the lads getting up day in day out, knowing every single week what you're facing. If we have one fixture a week, it feels like a holiday camp because normally we have two or three fixtures, and it's tough! It's the monotony of clean-up straight after the game, the divot forks come out, then we go through some aeration processes and, before you know, it they're starting again. Between those fixtures, you are trying to feed in any way possible; just trying to get through the season. It would be lovely to plan out and have a fertiliser programme, but it just doesn't work like that here. When we installed the PlayMaster, we sat down and were told we are going to give you a feeding and maintenance programme. I said, hang on a minute; before you do any of that, take a look at my next year's fixture list. They were shocked as they didn't realise we had so many games, so a bespoke programme was put together."

Mark likes to keep the height of cut as long as he can at the start of the season, to help him keep as much grass cover as possible. "What we tend to do, on a match day early in the season, is get a Ransomes Mastiff out, roll it without cutting and get some water on it beforehand. We find this gives us the pace on the ball for the Newport County games. To try and free up the lad's time, I use a contractor, Nick Rawlings, Floyd Turfcare and Weed Solutions Ltd, who carries out my fertiliser programme and will apply fungicides when required - he is a great help to us."

With limited machinery at hand, Mark is grateful to have a great relationship with Jim McKenzie and his greenkeeping team at Celtic Manor, who are more than happy to help him out when he needs a machine or even an extra pair of hands on match days, if required. He can also call upon the help of the Welsh Rugby Union. "I have great relationships with local clubs who are very good to me; they're normally on the end of the phone if I need a piece of equipment. I'm also lucky to have a good relationship with Ted Hopkins, and I'm happy to provide hospitality and sponsorship in exchange for the servicing and supply of machines. We certainly don't have an abundance of machinery, but I would love to invest in a Toro ProCore, as it's lightweight and enables us to get holes through the carpet in the winter months; most of the compaction is in the top couple of inches."

"With us being the first stadium to install a Desso PlayMaster, I feel last year we were a little bit light on the renovations and I would certainly like to see a higher level at the end of this season. We are currently taking some counsel on that now; in mid-February, Dan Duffy and Sion Bennet from Desso will come down and discuss the way forward."

To add to the wear on the pitch, Mark has to fit in community games before any renovations can commence. "I try and push them all to the end of the season, but this is getting shorter. This season will finish in the middle of May and football will want to be playing again by the middle of July. That only gives us a period of six to eight weeks to achieve everything we can."

Mark shares his thoughts on the turf industry going forward. "I can see the future being more multi-use stadia, with less money being around. I believe all stadia are struggling, especially in the lower leagues, and you normally find that the grounds part of the operation is the last department to get any overspill of money; so I can see more people ground sharing. It's tough - I think a lot of groundsmen would say the same."

"One of the big gripes for me nowadays involves social media. I have staff who work a ridiculous number of hours every weekend, only to have derogatory comments made towards them, which are sometimes very personal, almost always ill-informed and can be very hurtful.

I'm now trying to be a little more proactive on social media, in a bid to educate fans how much the team do throughout the week as they are doing it."

After chatting with Mark and having seen first-hand what his team cope with week in week out, I can only commend the dedication they have; to try and produce a quality surface each game, with such a huge fixture list and testing conditions in winter, is no mean feat. Keep up the good work and good luck for the rest of the season. Rodney Parade is a stadium in the city of Newport, South Wales, owned and operated by the Welsh Rugby Union. It is located on the east bank of the River Usk in Newport city centre.

The ground is on Rodney Road, a short walk from the city's central bus and railway stations via Newport Bridge or Newport City footbridge. There is no spectator car park at the ground, but many multi-storey car parks are nearby.