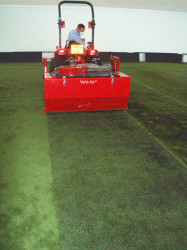 Pitchcare were recently invited by Campey Turfcare systems to Brockall, home of Blackburn Rovers training ground to look at the Charterhouse range of sweepers and vacuums.

The demonstrations took place on the indoor dome's synthetic pitch and were ably carried out by contractor Mark Pashley from Pitch and Track.

The purpose of the day was to revitalise the existing 10-year-old surface using the Redexim Charterhouse machinery, this equipment is the first to be certified (per
July 2007) by the Synthetic Turf Council. 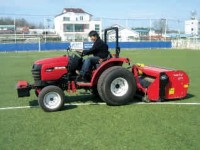 The infill material used in synthetic systems must be kept level for a consistent laying field and the upper carpet fibres have to remain free of litter and leaves to avoid the accumulation of dirt and bacteria, as well as, harmful materials such as glass splinters.

The new Verti-Top 1500 achieves this efficiently and effectively. Its rotary brush removes surface litter and the top infill layer, and then filters out debris by using a vibrating mechanism. The cleaned infill is then redistributed evenly over the surface, and a rear brush ensures a smooth finish.

The cleaning intensity of the shaking sieve is adjustable and the debris collection hopper drops down for ease of emptying. 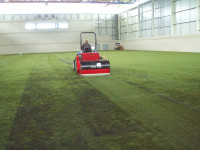 On the day, the debris removed from the surface included hair, chewing gum and small stones.

The machine uses a special rake to open up the fibres and the infill first, thus enabling the rotating brush to collect the debris from deep in the mat. 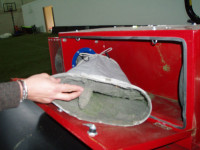 The Verti-Top Vac is a version of the tractor-pulled Verti-Top 1500, in which a vacuum cleaning mechanism has been incorporated. While the vibrating mechanism is collecting the larger debris particles, the vacuum system is sucking all the fine particles, like dust, into a filter bag. In fact a very similar make up to what you might find in the Hoover bag at home.

The last big machine that was demonstrated was the Verti-Air, A common problem with artificial turf is debris and bacteria build up deep down within the infill. This problem is compounded by compaction of the material, restricting drainage through the backing material and creating damp, stagnant areas.

To address these problems, the Verti-Air utilizes a rotary brush and turbine induced compressed air to lift all material, sift out the debris and return the clean, 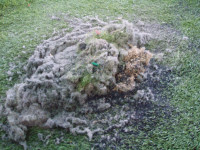 dry and decompacted infill back into the turf. Even the lightest debris is removed with the exclusive fine filter screen.
Looking in at the filters and the level of debris that was pulled out of the machine, even after one run up and down, it was clear that the carpet was long overdue this therapy. It also showed how much rubbish builds up in the infill and fibres, clogging up the system and creating the hardness that these types of surfaces suffer from.

The use of these machines on the Blackburn playing surface made significant improvements both to the re-softening of the surface as well as it's looks and playability. A more consistent bounce was introduced and the fibres were brought back to the surface with a looser infill.
While the senior players at the club don't tend to use this surface other than in exceptional circumstances I'm sure that the younger Academy players will have noticed a positive change.