0 Carving out a Career Originally a forester with a forestry / conservation company, his chainsaw carving career came about by chance when a large limb fell from a 1000 year old Oak tree.

Rather than cut up the limb and burn it, Dennis decided to carve it into a bench, which the limbs shape and form lent itself to perfectly. Dennis's carving career took off from there - as a hobby at first - where he started carving small seating arrangements, and quickly amassed a large collection of sculptures outside his house. 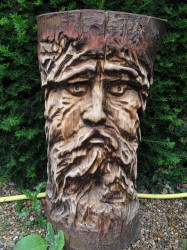 Self-taught and even after 20 years carving Dennis says he is still learning and developing his skills. He describes chainsaw carvings as "Affordable art."

For the last ten years Dennis has been renting a field, as an artist, at Knebworth House. He arrived at Knebworth through his acquaintance with the estates Deer Keeper. The two had met at various craft shows around the country, and the Deer Keeper suggested to Dennis that he set up at Knebworth.

Dennis now carves at Knebworth with his colleague David Flemons; a retired Policeman who started a second career as an Arborist. David was initially Dennis's apprentice, and the pair have been carving together for nearly three years.

A large part of Dennis's work is commission based, but says a lot of his work is bought as a gift for someone else. A typical commission would involve several discussions between Dennis and the client to discuss what is possible, but he adds that "the client is only limited by their imagination as to what they can have." 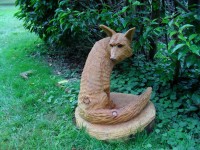 The longest carving Dennis has carried out was a 33 foot long, five foot diameter piece that was a mixture of fantasy and wildlife imagery. His ideas for his original carvings are often inspired by the shape of the wood, or in the case of a commission, he gets a piece of wood to suit the subject matter he is about to carve. The most obscure carving Dennis has carried out was for a foot bridge in Watford. He had to carve the handrail and posts. This was more of a functional carving than an ornamental piece.

Dennis is very pragmatic and admits that sometimes when using a chainsaw, errors can happen, but sometimes errors can work to his advantage "If you make a mistake you can adapt the carving, sometimes it turns out for the better."

The Best Wood for Carving 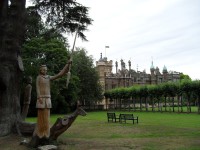 Dennis's preferred wood for carving is western red cedar, as it has "a nice colour and smell, a lovely grain, and it is very durable and easy to carve." It is, however, difficult to get hold of as it is generally grown as a nursery crop for native broadleaf trees, and therefore has a limited size of about two foot in diameter.

Other woods favoured by Dennis include English Oak, Sweet Chestnut, in fact most hardwoods, although he concedes they are harder to carve. However he doesn't like to carve Willow because it splits easily and is not very good outside; it's also a bland looking wood in his opinion. Nevertheless he enjoys the medium on which he demonstrates his art, stating "Wood is sustainable and fits into my environment."

Being as environmentally friendly as possible, Dennis tries to recycle as much timber as he can. He sources wood from local tree surgeons, but has to buy it by the truck load, a very big truck load of 25 tonnes. Small quantities aren't available. It is possible to import mahogany from overseas, but Dennis hasn't done so to date.

It's not just chainsaws that Dennis uses to complete a carving. Electric power tools can be used for sanding and finishing, but it depends on the clients brief as to the degree of finish. 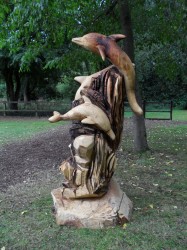 The aftercare of the carvings depends on the wood used. The durable woods have a weather proofing agent such as timber oil worked into them. Less durable woods have several coats of wood preservative mixed with the finishing oil applied to them.

Dennis explains "The wood expands and contracts as seasons change; a small crack can harbour fungus, so there is a need to treat the carving dependant on the wood type. It is the softwoods more often than the hardwoods that need treating."

With health and safety high on the agenda where chainsaw use is concerned, I asked Dennis if using chainsaws on a regular basis had affected his health. "Not really, I've always been physical." To date he hasn't had any accidents, but due to the nature of the work he only carves for five hours per day. "It is intense, using a potential lethal machine requires a lot of concentration, so I have to make sure I don't get fatigued; mistakes happen when you get tired."

He says that developments in chainsaws have made carving easier for him, citing anti-vibration as a very important step in the evolution of the chainsaw. But developments aside, Dennis says that carving is still as dirty, fast, and great fun as it ever was.

Dennis is partially sighted; he has no peripheral vision (tunnel vision). It does not present any danger for him, but can be for anyone around him. As such he has to make sure he has a five metre exclusion zone around him when he is carving.

He has to be disciplined in his working environment otherwise he can put things down and not see them again due to his limited vision. He describes his condition by saying that "you can trip over a chair to pick up a pin." Dennis has been active in competitive chainsaw carving for some time; he came second in his very first carving competition, which was at Woodfest Wales. He still competes, but has taken a more active role in co-organizing competitions as he knows so many international teams of carvers.

The competitions tend to last three days, so the carvings are looked upon as three day carvings. The log to be carved by each carver is drawn by lottery. What is carved is up to the carver, but most bear in mind it is a family show. The amount of actual carving carried out over the three days is approximately 22 hours.

Judging is carried out by the chainsaw carvers themselves. The judging criteria include whether or not the subject matter of the carving was correct, its wow factor, and the general execution of the piece. The final finish is difficult to judge as some carvers want a rustic look, whereas others prefer a smoother finish. Each carver picks their top three and awards them five, three or one point for first, second and third respectively. The carver with most points is awarded first place. When asked if there was anything he would like to achieve in carving that he hasn't already achieved he replied "not really." He was rightfully proud of a recent exhibition of his and his fellow carvers work at Knebworth House in August that he helped organize, as it was thought to be the largest exhibition of chainsaw carvings.

Dennis has pretty much achieved all he would like to in his carving career. Through his work he has met the Queen and numerous celebrities, and is happy to let fate dictate what happens next. One thing's for sure, Dennis will always carve.

For more information about Dennis Heath and his carvings, visit www.knebworthcarvings.co.uk

To contact Dennis or Dave Flemons to discuss a commission e-mail them at admin@knebworthcarvings.co.uk