5 Control of moles on Sports Pitches

Control of moles on Sports Pitches

Mole activity is on the increase. More and more mole hills are beginning to appear on sports and playing fields, particularly now that soil temperatures are beginning to rise, resulting in greater worm activity, a valuable food source of moles. These mole hills can cause serious surface damage to sports fields which will lead to additional work, time and and costs to eradicate them. Having a better understanding of the creature's habits will play an important role in mole control. 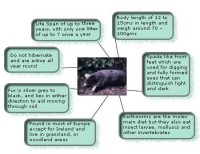 Due to the moles tunnelling behaviour they cause damage to land by the unsightly mole hills they cause, where they push soil to the surface to produce the tunnel. On playing fields and golf courses the area disfigured by the mole hill prevents the grass from growing. The mole hills can affect surface playability affecting ball bounce and roll. The mole tunnels can also be a safety hazard especially on sporting areas with people running at pace and the tunnel giving way and a twisted or even broken ankle resulting. There are a number of methods that can be used to control mole damage.

Earthworms are more active in soils with a higher soil pH and will not invade acid turf at a pH below 4.5. Therefore, to keep worm populations low we must keep the soil pH low. This can be achieved by applying sulphur based materials (fertilisers). However, over use of sulphur can lead to other turf and soil problems. Regular soil analysis is recommended to keep a check on soil pH levels.

Earthworm activity can be reduced by the following cultural controls.

When the mole encounters a blockage in the burrow, it pushes its way through. Specially designed mole traps take advantage of this, to maximise the chance of trapping a mole its vital to place the trap in the right place at the right time:

The use of pesticides , gassing and poison must only be used as a last resort and in some cases should not be used at all, particularly when being used on sites that have public access, for example council open spaces and school sites. Only approved chemicals and poisons must be used and applied by fully trained or experienced person.

There are two formulations of the fumigant aluminium phosphide currently approved.

Before strychnine can be obtained, an application must be made to DEFRA (Department for Environment, Food and Rural Affairs). The necessary criteria must be met by the applicant, who should be trained in the use of strychnine and listed by DEFRA. A permit may then be issued together with an authority to buy.

Section 8 of the Pests Act 1954 prohibits the use of spring traps that have not been approved. The Small Ground Vermin Traps Order 1958 exempts from this ban the spring traps commonly used for catching moles in their runs.

A written assessment, as required by the Control of Substances Hazardous to Health Regulations 1999 (COSHH), must be carried out before strychnine is used. This should take into account the possibility of using methods of control less hazardous to the operator, such as trapping. These regulations also apply to the use of fumigants.

Strychnine Hydrochloride is a chemical subject to the Poisons Act 1972 and Poisons Rules 1982. Under the Animal (Cruel Poisons) Regulations 1963, the use of strychnine Hydrochloride is approved under the Control of Pesticides regulations 1986, as a "commodity substance" for use as a vertebrate control agent for the destruction of moles underground.

There are other methods which are claimed to be of value in resolving problems associated with moles.

Pyrotechnic devices or mole smokes which, when ignited, produce smoke that carries a pesticide. These are placed in the tunnels used by moles. They are often ineffective as it can be difficult to ensure that a sufficiently toxic level of the compound accumulates in the tunnel.

Chemical repellents applied to the tunnel are also unlikely to be successful; they may just cause moles to move to another area, so increasing the problem or damage caused. Currently Renardine (containing 30% bone oil) is the only commercially available repellent that is approved for use against moles under the Control of Pesticides Regulations 1986.

Battery and wind-powered devices, producing vibrations in the soil are claimed to act as mole deterrents. The available information suggests that these devices are not effective and are unlikely to eliminate moles from problem areas.