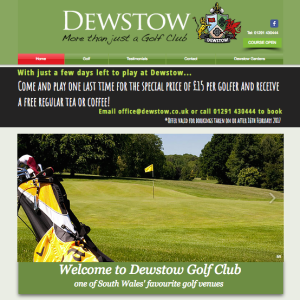 A club described in the Welsh press as 'one of Monmouthshire's premier golf clubs' is closing down after 30 years of trading.

Dewstow Golf Club will be turned into a private residence after a period of 'financial pressures'.

The facility once had two 18-hole courses, a 24-bay floodlight driving range and more than 1,000 members, plus its clubhouse was a popular location for weddings and events, but more recently membership has fallen and one of the courses reverted back to agricultural use two years ago.

According to its social media, the club will close on Friday, March 31.

Both the clubhouse and its grounds are now owned by Royston Phelps, who has proposed to change the property's use from a leisure facility into a dwelling.

After plans were submitted to Monmouthshire County Council in June 2016, the remaining club members were allowed limited use of the facilities and knew that the closure would take place.

According to local reports, a property agent had attempted to market the venue over two years but to no success.

The site was passed onto Broadhall Development Company, which confirmed that there "was not an acceptable option for them to pursue on viability grounds."

A "major golf club developer" is said to have shown "some" interest in the site but no deal was agreed.

"A lot of members have moved on to the likes of St Pierre in Chepstow or in Llanwern, so they've dispersed all over the county," said member Tony Croke.

"Dewstow Golf Club will be a great loss to the staff, members and visitors, and will be sadly missed."

Some people on social media were devastated by the news. Megan Harris wrote on Twitter: "Breaks my heart that tonight was the last ever time I stepped in Dewstow Golf Club." Adam Wills added: "Really devastated they are closing Dewstow golf course. Had some amazing memories playing and working there for the best part of five years."

You can read the original article from Golf Club Management HERE