by Abi Fordham
in Industry News, Schools & Colleges, Rugby, Cricket, Football, and Equestrian
on 24 May 2016 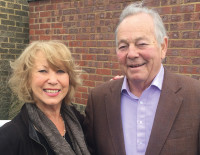 Duralock Performance Fencing has a global reputation within the equestrian and racing markets, however, that's not how it all began! Chairman, Marcus Wheeler, talks about the breakthrough for the company which now supplies racecourses and other venues across the world

A buzz of productivity surrounds the Duralock headquarters as we pay a visit to the main office and manufacturing facilities in the middle of the Cotswolds. Having relocated from their original West Country position, the company has grown considerably since its humble days in the early 90s, as Chairman Marcus Wheeler explains."'My wife, Janet and I were fortunate enough to retire early after the sale of our previous business. We had a love of horses and some spare time and, when we saw the unique design of the Duralock fencing system, we knew immediately that there was a great opportunity within the equestrian industry."

The Duralock fencing system, with its two-chamber design, had originally been designed for the residential market, which it served extremely well; the distinct lack of deep-digging, compared to other fencing on the market and the easy installation method, made it ideal for homeowners. 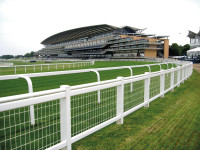 "We loved the fact that it really catered to the needs of the market; easily installed, took out all the tricky bits - like copious amounts of nails - and required no maintenance compared to the continuous labour of wooden fencing. The PVC was extremely modern for its time and the design even won the Sunday Times award for innovation.'

The smooth edges and safety features of the fencing, including the way it would not splinter or shatter allowed Marcus and Janet to see the future, shifting Duralock into the realm of the equestrian and ultimately, the horseracing environment.

"We started to develop the PVC profiles we had to suit the needs of the equestrian market. From what was basically a cow-shed in Cornwall, we started to expand the company product portfolio; our swan-necks were born and the racerail which can now be seen at prestigious racecourses across the world began to take shape. Taking advantage of the latest technology in composites - additional UV stabilisers and impact modifiers - meant that our products could meet the high demands of the equestrian market and the company has developed strength on strength ever since."

"Growth of the business was initially slow as the market remained unconvinced about the rigidity and performance of the new PVC product we were offering compared to the mainly aluminium systems which were being used at that time. However, as time developed, those doubts were proved wrong as our fencing proved itself as safe and reliable, particularly with its racerail design."

"Jockeys and horses often and, of course, accidently tested the effectiveness of the new racerail system. It was such an exciting time in the racing industry, to see the positive changes within the safety of racecourses for both horse and rider."

"Neil Wyatt, the Inspector of Courses at the time, and who subsequently lent his name to the RCA's Racecourse Groundstaff Awards, helped us to obtain approval from the Jockey Club, which was a true success for the company. Neil subsequently joined the company as a Non-Executive Director for a number of years. We found his contribution and advice in the development of the safety aspect were central to our further development."

A huge step forward for Duralock in the international market came from the United Arab Emirates. With some years of investment and representation in the Middle East, Duralock was able to establish confidence within the market. "It is not an area where you can move in and move out and make a quick profit," says Marcus. "The Middle East customer is very astute and it takes time to see results. After much worthwhile effort, we won a large contract with Meydan Racecourse, which we are extremely proud of, however, this was the result of many smaller contracts that had built trust across the entire region. In the past few years, we have won larger orders for camel tracks and we are extremely proud of this. It shows the product is proving itself in the harsh environment, and our clients continue to recognise this and trust and specify us for their work."

As time went on, the product was proving itself time and time again and it was now being directly specified for projects. Such was the market awareness amongst professionals that the demand grew to the extent that new investment could be made."

The growing business contracts meant that Duralock was outgrowing its small beginnings; the manufacturing resources and facilities struck difficulty in meeting the demands and often would be in full-flow for twenty-four hours a day, seven days a week. 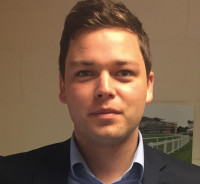 An investment in factory resources was obviously required, which has now been centralised in Chipping Norton, where the office and manufacturing team work closely alongside each other. With a reorganised production structure and the incorporation of CAD CAM technology, Duralock is fully equipped for the market needs, which are becoming more diverse as other industries recognise the possibilities the system can offer them.

Grandson of Marcus and Janet Wheeler and Business Development Manager of Duralock, Jonathon McGovern, has recently joined the family business. He explains "We can see that, having established ourselves in the equestrian market, other sports are recognising and moving towards our safety systems. There is an obvious need for safety for the players from a variety of physical sports and this is where we are starting to extend our marketing attention with encouraging results."

"Apart from the safety aspect, sports clubs love the look of our fencing - it really transforms their grounds. Not having to constantly maintain the fencing lets the groundsmen spend their time on more important issues. We speak to lots of people who have had our fencing at their clubs for years, and it's great that they're still so positive about it! The fifteen year guarantee gives clubs a reassurance for their investment." 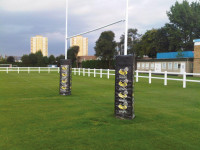 The proved safety aspect of Duralock fencing across the board meant that there was a natural trickle-down effect of the product to be used within schools and different sports, such as on rugby and football pitches as well as cricket grounds has increased over the last decade.

Edgbaston has utilised the balustrade system around their grounds and many clubs are seeing the benefits of increased revenue generated by adding advertising boards to their post and rail fencing systems, for which the company supply specially designed clips.

From the new developments made by pushing into the sports sector, Duralock had to ensure products were fit for purpose and, therefore, designed removable systems to allow the space where it was installed to be completely flexible for the end user. These options allow a greater spectrum to the wide range offered.

When asked about the competition within the industry, Jonathon says; "Yes, of course we are always aware of the competition we face, but we are extremely confident in our products. The future of our company depends on sensible product innovation whilst still maintaining a competitive price. Over the past twenty-five years, we have learnt and grown considerably. We now have a great blend of experience and ambition within the business and we won't have a complacent attitude. We have a great team here; the young-blood of the business push the aspirations and brings new visions, whereas our long-standing staff really back-up the knowledge and skill of our industry - it's a great mix! We are really lucky to have a close team and we think that this transfers directly to the experience our customers receive; friendly expertise where every customer counts!

Our installations from this year alone include some of the most prestigious racecourses in the world, including Ascot and Cheltenham. We are extremely proud to count these as our clients, as we are every single client that chooses our product, and feel that their returning custom is a credit to our business and is evidence that we are doing it right and will continue to do so!

In regards to the future, we have plans for growth with the combination of new product development and constructive marketing. There's great things in the pipeline and I'm extremely confident in our chances to double business in the next two to three years."