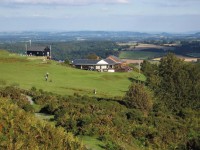 Kington Golf Club's claim to fame is that it is the highest golf course in England, perched, as it is, atop Bradnor Hill at 1284 feet above sea level. The views are simply stunning and, on a clear day, it is possible to see the 'seven old counties' - Breconshire and Pen y Fan, the highest point of the Brecon Beacons; Herefordshire and the well known Offa's Dyke and Hergest Ridge; Gloucestershire and the May Hill; Monmouthshire and The Skirrid mountain; Radnorshire and the Black Mixen; Shropshire and both the Clee Hill and The Wrekin; and, finally, Worcestershire and the famous Malvern Hills.

Founded in 1925, the club is located just outside the medieval town of Kington in the beautiful Herefordshire countryside and close to the border with Wales. It is considered to be one of the finest inland links courses in the country, making excellent use of the outstanding natural location.

It was designed by the highly regarded golf architect, Major Cecil Key Hutchison, who worked with James Braid in designing Carnoustie and Gleneagles and later remodelled Woodhall Spa.

The land is part of the National Trust and accommodates the historic Offa's Dyke. It is deemed as Common land, whereby 'commoners' have the historical right to make use of the land. In this instance, there are four farmers who have commoners rights to put their sheep on for grazing, only taking them off twice a year - in the early spring for lambing, and in the summer for ramming!

Having to accommodate around a thousand sheep out on the course, doing what comes natural to them, is Head Greenkeeper, Ian Gough, who has spent his whole working life at the course, beginning his career in 1978 when he left school. He was, at that time, the second member of staff but, in 1981, the club took on a third greenkeeper.

"Having a substantial number of sheep grazing the course on a daily basis brings its own set of issues," explained Ian. "Every day we have to clean up the fairways, blowing away the daily tonnage of droppings."

"Over the years, we've perfected several techniques to do this. Way back, we used to harrow the fairways to spread the droppings, and we've also used an old Sisis Litamiser to sweep them up - not a use you see in their promotional material! However, we now use a large Trilo BL960 blower on the back of a Renault tractor to blow off the whole course in a day." 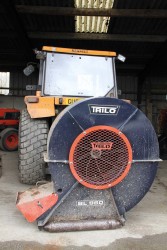 "The droppings are blown to higher areas of the fairways where, under natural weathering, they are broken down and washed back over the fairways which, in turn, promotes grass growth and then provides the sheep with a new crop of food."

Ian explained that sheep, being somewhat territorial, tend to lie down in favoured locations, and these include the fifty plus grassy bunkers that were formed when the course was built. "We tried putting sand in some of the bunkers to see if that would change their behaviour, but the project failed," bemoaned Ian. "Not only did it become more labour intensive, but the sand was easily polluted with droppings and, with the strong winds up here, was regularly blown out, so we reverted back to grass bunkers."

Of course, the main priority is to try and keep the sheep off the greens. These are a simple push up soil construction, each averaging 400-500 square metres, which are modelled into the natural landscape. The fairways are, effectively, the grazed land between tee and green.

"We've developed a number of tactics to control the sheep and keep them off the greens," explained Ian. "We mow them tight, at 2mm, thereby reducing the amount of grass available to them, so that they go elsewhere to find easier pickings. We have also been granted permission to 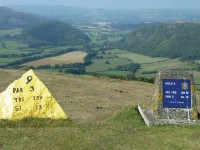 revert areas of bracken back into grazing land, which gives them larger areas to feed on. And we'll often herd them to different parts of the course."

Ian has perfected a maintenance regime to control the growth of bracken, using mowers and crushers. "The farmers come in once a year, usually around the end of August or beginning of September, and harvest the bracken for bedding. Then in spring, when the young fronds start appearing, we roll the bracken with specially made ribbed rollers that crushes the stems, which reduces the plant's ability to grow. These rollers also help compact the ground which, again, reduces growth. The net outcome is more grass being made available for the sheep."

The club, under the stewardship of Ian and Greens Chairman David Radbourne, work very closely with the National Trust and local farmers to ensure they comply with their policies and undertake the correct management practices to maintain the common land.

The greens are generally mown on a daily basis, using a combination of triple and Allett pedestrian cylinder mowers. It usually takes the three staff six hours to complete using the pedestrian mowers, along with moving tee boxes, compared to one man and three hours using the triple mower.

"The Toro triple mower is a recent acquisition," confirmed Ian. "Unfortunately, we are losing Gareth, who has decided to leave for a new job opportunity. So, as we will only have two staff, this will help speed up our mowing times. Rather than rush into getting a replacement, we've decided to look at other options and, in the meantime, see how we cope using the new triple."

The sward composition of the greens is poa dominant, with some bents and fescues. "Maintenance is fairly straightforward though," said Ian, "with daily mowing, verticutting every fortnight, spiking monthly and an application of Farmura granular and liquid feeds on a twice monthly basis, along with wetting agents."

"Several years ago, we invested in an automated watering system for the greens, extracting water from a man-made reservoir we constructed. It holds a million cubic metres of water; not that we've had to use much water during the last two summers!"

"We generally mow the tees once or twice a week, depending on growth and for presentation, using the Allett mowers, at the same time repairing divots. They are fertilised and aerated as and when required. We've also extended and re-turfed a number of them in recent years."
"As for the fairways and rough, we carry out some localised mowing to keep them tidy, but the rest is left to the sheep to graze."

Ian was keen to show me an area of the course locally known as 'the bowl' where, in the early nineteenth century, local gypsies held unofficial carriage races, along with other illegal activities such as bare knuckle boxing and cock fighting. He pointed out the remnants of where they used to hold the cock fights in one large grass bunker, where a raised area separated the cocks before they fought.

"I'm fortunate to have the support of our Greens Chairman David Radbourne. He's a local retired businessman who has been a member of the club over twenty years and held the post for the last five years. We meet on a daily basis to sort out any grounds related issues, but David is the one who liaises with the farmers and National Trust and also manages the maintenance budgets."

"I've also enlisted the services of Chris Roberts, a local agronomist who has recommended a programme of work for the greens, that includes aeration and topdressing."

"At the end of the growing season, we intend to scarify the greens two ways with the Sisis 600 Rotorake, then either hollow tine or solid tine, depending on needs, followed by a topdressing of between 100-150 tonnes of Leighton Buzzard sand. We'll then apply a further two sand dressings (15-20 tonnes per time) during the winter months. The net result should be drier, firmer and smoother greens. Spring renovations will be kept to a lighter programme of scarification, aeration and topdressing."

With the staff reduced to just two, David is looking at ways of involving the members to undertake some jobs out on the course, perhaps mowing some of the grass areas on their golfing range and around the clubhouse, but always keeping in mind the health and safety aspects of what they can and cannot do.

Like many clubs, the last couple of years have been quite tough in regard to the weather; the recent cold wintry weather, particularly the heavy snow, resulted in the course being closed for a few weeks, so the warmer spring weather was much appreciated by both the greenkeeping staff and the club's 400 members.

It is a very popular course in the summer, with many visiting societies keen to enjoy the challenge of playing golf on one of the most natural courses in the UK, whilst also enjoying those panoramic views - weather permitting, of course!

Offa's Dyke (Clawdd Offa) is a 177 mile long dyke that runs along the English/Welsh border from the Severn Estuary just below Chepstow in the south to Prestatyn in the north.

It is generally accepted that much of the earthwork can be attributed to Offa, King of Mercia from 757 to 796. Its structure is not that of a mutual boundary between the Mercians on the one side and the people of Powys on the other. The earthwork was dug with the displaced soil piled into a bank on the Mercian (eastern) side. Where the earthwork encounters hills, it passes to the west of them, constantly providing an open view from Mercia into Wales. The dyke may have been constructed as a defensive earthwork, as well as a political statement of power and intent.

Offa was one of the great rulers of Anglo-Saxon times, though his reign is often overlooked due to a limitation in source material. That he was able to raise a workforce and resources sufficient to construct such an earthwork as Offa's Dyke is testament to his power.

It is likely that some form of 'service' system, along the lines of corvée (unpaid labour), was used to construct the Dyke, with people from local areas being required to build a certain length of the wall. This can be seen as additional to the normal services that had to be offered to kings.

A document exists from around this period known as Tribal Hidage, which makes some assessment of how land was distributed in the 8th century. Though there is little evidence to associate the document with the Dyke, it is possible that both the Dyke and the document stem from a common practice.