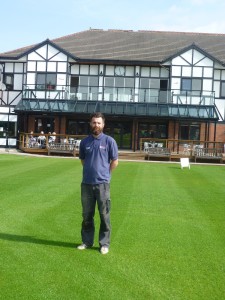 The Northern Lawn Tennis Club, in West Didsbury, has a total 7,500m2 of grass. This year it will be home to The Aegon Manchester Trophy, a men's ATP challenger event in the first week of June. Whilst it is great news for the club, it's created a lot of work for Head Groundsman Des Ruchwaldy and his team of one!

Des started at the club 14 years ago as Assistant Groundsman and three years later was promoted to Head Groundsman. During busy periods in the summer he has the help of an additional assistant.

Because of this tournament, preparation work started last autumn with the courts affected being fraise mowed, spiked, seeded and top-dressed - a full renovation in fact. In the previous season Des had used DLF's Johnsons Sports Seeds J Court mixture, and had achieved such good results it was selected again for this renovation.

Not only did the mixture perform well in their soil conditions, but it also fulfilled the clubs policy of balancing quality against cost. The renovation was carried out in the second week of September and, thanks to the warm temperatures and dry conditions, they had good coverage by early October.

"We started mowing down to 16mm in early February," explained Des, "and have mowed every two weeks since then, getting down to 14mm. Since the seed germinated and established the courts have never looked as good over a winter period. The grass has great colour and people haven't stopped telling me how great the courts look for the time of year. We're hoping to get a spring oversow in at the beginning of April."

After the tournament they will irrigate, or let the rain get to it, and within a week the courts should be showing good signs of recovery - ready for the members to return playing on it.

In a normal season outdoor play will commence at the club around the 2nd week in May and finish about the 2nd week of September. During the season he will do nothing more than keep to a regular mowing regime, apart from feeding with a growth regulator. Because of the nature in which the members play, the baseline does tend to disappear quite quickly. 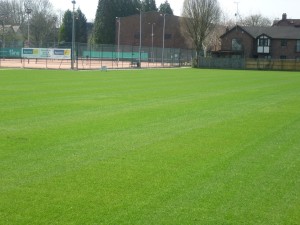 There's not a lot Des and his team can do about it as it can't be oversown or topdressed because of the clay soil - meaning the seed can't establish well enough before it's kicked out. As long as people don't mistreat the courts Des doesn't mind. "That's what they're there for after all," he says, "so long as we can get them looking tip top again at the end of the season, ready for the next, we're happy. I get great satisfaction out of the members' compliments about the grass and is the only motivation I need to commence renovation programmes."

The partnership with DLF/Johnsons goes back a few years to a time when there was a horrendous autumn at the club and no seed would germinate. This left the surface in mud bath conditions and Des called in DLF technical representative, John Hughes. Together they looked at cultivars, germination temperatures and came up with a forerunner to J Court which transformed the playing surfaces - Des was really impressed with the service and the relationship has continued ever since. When the switch to J Court happened the colour had never been better.