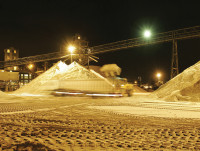 Sand is a cornerstone ingredient in all construction and maintenance materials for both natural and artificial playing surfaces.

Whether mixed with an organic amendment to produce topdressings, rootzones and divot mixes, or used on its own as a synthetic carpet infill or beach sport surface, sand plays a vitally important role in a playing surface's performance, appearance and longevity.

Sand comes in many different forms, all of varying quality with a range of properties and physical characteristics, so the challenge is to select the right one for your project.

What is sand and where does it come from?

Sand is an inorganic granular mineral composed of individual particles or grains formed by the weathering and erosion of rock.

These small, finely divided fragments of rock will vary in chemical composition depending upon the source and condition of the parent rock from which they were derived.

As far as the UK is concerned, sand refers to a material which has a grain size distribution between 0.063mm and 2.0mm. However, there are some countries, including the USA, who categorise sand particles as those having a diameter between 0.053mm and 2.0mm.

It is important to remember that any particle between 0.063mm and 2.0mm would be classed as sand, including material with very high calcium content (calcareous sands). The majority of sands quarried in the UK consist mainly of silicon dioxide (SiO2), otherwise known as silica. There are, in fact, nine different crystalline forms of silica, but most of us associate it with quartz silica. In this form it has a high melting point and is also inert, stable and extremely hard wearing.

The actual percentage of silica in sands can vary from around 80% up to 99.99%. Industrial silica sands are characterised by their high silica content (above 95% SiO2), which is usually in the form of quartz. Generally, whiter, paler coloured sands have fewer impurities. Typical impurities would normally include Iron oxide (Fe2O3) and Alumina (Al2O3), however, surface clays, feldspar, pyrite, chromite, coal, lignite, sea shells or chloride salts could be present.

The terms: silver sand, beach sand, soft sand, sharp sand and silica sand, are all used, but what do they refer to?

Sand can be obtained using various extraction methods, including: underground mines, open cast mines (quarries) or dredged from the sea or river beds. The source of extraction will usually determine the impurities present in the final sand grade. For example, sea dredged sands would tend to have higher chloride salt and calcium (lime) content. All sand deposits contain material having a wide range of grain sizes, usually mixed with clay and gravel. These sand deposits will require extensive processing to remove the unwanted stones, oversize grains and clay. There are numerous types of sand processing equipment available. The most basic process would involve the "as dug" sand passing through a screener to remove any oversize material (stones or gravel). This would not change the composition or grading of the raw material in any other way.

An improvement on this would be a basic wash plant which would, typically, consist of at least one screener combined with some form of holding vessel or open topped tank filled with water. Whilst this process would reduce the silt and clay content, it would not sort the grains or improve the particle size distribution.
Whilst a simple form of processing may be acceptable for some basic building/construction applications, it would not be suitable for sports turf use.

It is essential that sands used for sports turf are processed using a washing plant. Even small amounts of clay will negatively affect the drainage properties of any sand. The most basic washing plant will rinse the material and remove some silt and clay, sometimes these basic wash plants require the sand to be double washed, or even triple washed, to improve the cleanliness of the finished product.

Industrial silica sands are processed using sophisticated wash plants. Millions of pounds worth of investment is required for such plants. These will not only wash the sand effectively, they will also separate the incoming sand into two or more different grades. This process is commonly termed "hydro classification". This plant would usually consist of density separators, cyclones, dewatering screens, numerous pumps and extensive lengths of pipeline and conveyors, large lagoons all operated using sophisticated computer controlled software.

Various sand grades, for example "medium-coarse" and "medium-fine", are produced using a continuous process which utilises gravity to sort sand grain sizes whilst dispersed in water. Coarser (heavier) grains will settle towards the base of the tank for discharge, whilst finer (lighter) grains will remain suspended in water towards the top of the tank. These finer grains are removed as the water overflows. This process will produce consistently graded sand grades, irrespective of fluctuations with the incoming "as dug" material. It will also produce a tightly graded product with uniform sand grain sizes which are ideal for sports turf.

Sieve grading, or particle size distribution, is carried out using laboratory analysis. Standard procedures must be followed at each stage, from initial sampling through to sample reduction and final testing.

The first stage is to obtain a representative sample from the stockpile. This large sample then has to be reduced in size. It is this smaller, dried sample, of around 100g, which is then mechanically shaken through a set of sieves for a predetermined length of time, usually fifteen minutes. Various sieve mesh sizes are used depending on the grain size distribution of sand being tested. If the sand being tested contains any amount of clay or organic material, it would require washing and drying prior to sieve analysis, otherwise the individual grains would stick together, giving a false 'coarser' result.

We can use the information obtained from a particle size distribution (PSD) analysis in a number of ways. One is to calculate the Average Grain Size (AGS), which is normally quoted in microns. Whilst this information is helpful, it does not give an indication as to the spread of particle sizes present.

A more useful method is to calculate "D Values" from the cumulate percent passing curve. Any given D value is the particle size diameter at which a given cumulative percentage of material is indicated to pass. For example, if the D90 Value was shown as 650 microns, this would indicate that 90% of material is smaller than 650 microns. D Values can be used to show the potential for interpacking by calculating the D90/D10 ratio (Gradation Index). They are also used to ascertain whether drainage gravels are compatible with the rootzone layer (bridging factor).

This refers to two attributes: one being the grain surface texture or angularity, and the other being grain roundness or sphericity. Grain shape is influenced by nature, and is entirely dependent on the weathering and erosion subjected to each grain at the time when they were formed and/or deposited. Glacial deposits and some river "alluvial" sand deposits tend to have a more rounded grain surface, whereas carboniferous sandstone deposits would typically have a more angular grain surface.

Sands having an angular or sub-angular grain surface are preferred when used in golf bunkers, as this gives greater stability and less ball plugging due to greater frictional resistance, whereas rounded sands are preferred for use in synthetic turf infill due to them being less abrasive to the carpet.

Sometimes referred to as Perc rate or Ksat. This is one of the most critical tests where sands are used in sports turf. The main reason for using sand is to achieve adequate water movement from the surface through to the drainage below. This test is used to give an indication as to the amount of water that would percolate through a material, whilst at field capacity, for a given depth when placed above a gravel drainage layer.

This test should not be confused with infiltration rate. Whilst the two are certainly connected, they are carried out using completely different test apparatus and procedures. Results of any sand tested for saturated hydraulic conductivity should be quoted, as the amount of water passing through the sample at a given depth of material. The result would be in the form of 1050mm/hr at 30cm tension. It is crucial that the quoted result indicates the tension (or simulated depth). In general, testing the same sand at greater tension (depth) will give a higher result so, if the information quoted does not show the tension (depth), the results cannot be relied upon.

This measures the void space between the grains when compacted. Total porosity, as the term suggests, measures the total available pore space. Typically, values are around 38%-45%

This is the percentage of total porosity which contains water at or near the surface for a given tension (depth), whilst at field capacity. As the result increases, it indicates more water present at the surface.

This is the percentage of total porosity which contains air at or near the surface for a given tension (depth), whilst at field capacity. As the result increases, it indicates less water present at the surface.

The measurement of weight to known volume, this figure is useful when calculating the amount of sand or rootzone required. For example, if you required sand to fill a space 10m x 5m to 300mm depth (12"), this would require 15 cubic metres of material. If this volume is multiplied by the bulk density figure, then the quantity in weight can be obtained. Acidity of a sand or rootzone is measured using pH. Sands containing appreciable amounts of solid carbonates (calcium) should be avoided as this will increase the pH level. Ideally, sands used for sportsturf should be slightly acidic. Sands normally have a very low buffering capacity, which means that they would normally adopt the pH of their surroundings. The original pH of a sand would typically move towards the pH of the irrigation water, rainfall or fertiliser used.

Whilst a coarse sand may be expected to drain more freely than a finer sand, this will not always be the case. Grain size, shape, particle size distribution, silt and clay content, fine sand content, and even silica content, will all play their part in the performance of sand used for sportsturf. If you rely on particle size distribution alone to determine its suitability for use, then you will be in for a few surprises.