0 The Main man at Northumbria University

Northumbria University is a research-rich, business-focused, professional university with a global reputation for academic excellence. It is based in the heart of Newcastle upon Tyne, which is regularly voted as one of the best places in the UK for students. Based on Coach Lane Campus is Coach Lane Sports Centre and its facilities include sports hall, strength and conditioning suite, classrooms, changing rooms and several outdoor pitches - which is where Lee Williams met with Michael Main, Sport Grounds Supervisor, who has served the University for the last thirty-five years. 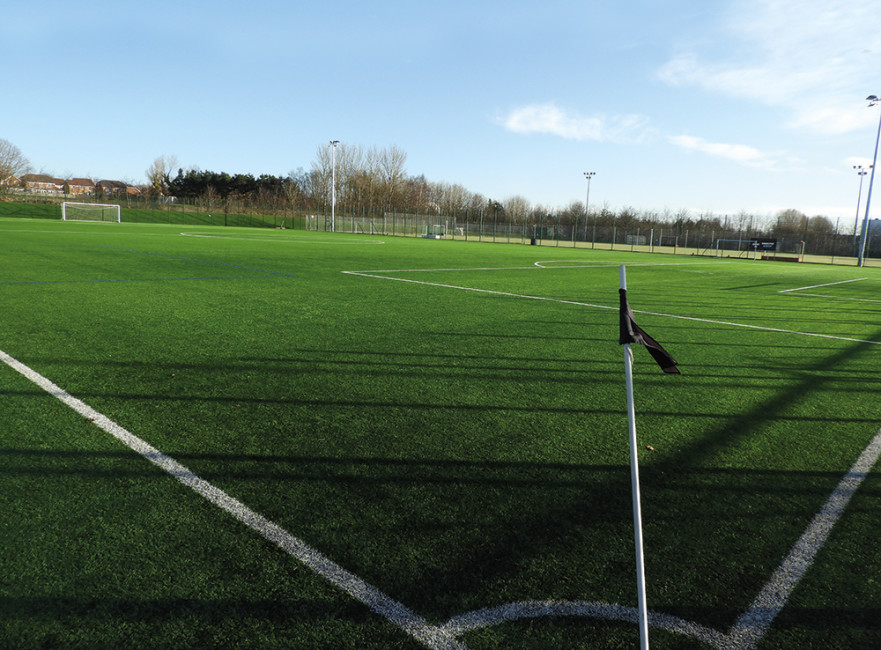 Michael first found his passion for horticulture and sportsturf whilst still at school, where he would look after the greenhouses in his spare time. When he left school, he worked at a local garden centre before getting his chance to become a temporary groundsman at a private school in Tynemouth. "Unfortunately, the groundsman at the time had a heart attack, so I stepped in for seven months whilst he was unable to work. A job then came up at Northumbria University's Bullocksteads Sports Ground, but I didn't get the job. Luckily, two weeks later, the university rang me about this job at Coach Lane Campus; I've been here ever since and I have not looked back."

The University no longer have the sports grounds at Bullocksteads; since 2017 it has been owned by the council. Now, the majority of our university sport teams play at Coach Lane Sports Centre, where facilities include a new 3G, a sand-filled artificial surface, the main pitch (which is a rootzone construction) and, a short walk away from the site, are four soil constructed pitches - which they call Little Benton, named after the farm that once stood there.

The main pitch was used to host Team Northumbria FC who played in played in Northern League and there were a number of standards on and off the field we had to adhere to. which meant it had to undergo a thorough renovation process. Michael explains how this came about. "The university's football team were promoted to the Northern League, which meant we had to have a pitch suitable to host the games and match the league's criteria. We hired a contractor to laser level and grade the pitch off using the original rootzone. It was then left to us to overseed and apply pre-seed fertiliser. To help germination, I borrowed germination covers from the Newcastle Falcons (situated just up the road), which helped us get the pitch playable within six weeks." 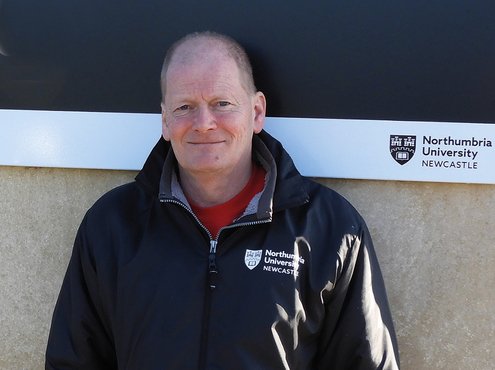 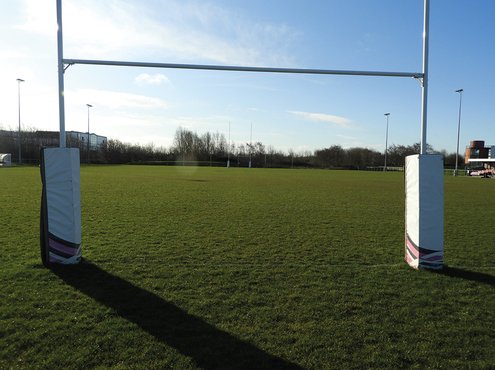 "Our football team no longer plays within Northern League, so the pitch is now used for rugby union training and rugby league matches. We would like to play rugby union matches on the pitch, but this is not possible; rugby union rules state you need a five-metre run off either side of the pitch, unlike rugby league that only requires three metres."

All the grass pitches have some sort of drainage system, but they are struggling to cope with the amount of rainfall we had at the start of 2020. "Usually, contractors come in at least twice a year to carry out a deep verti-drain on all the pitches which helps get a link between the surface and the drains. But, with the weather in the last year, we have not been able to undertake this, so the surface is just capped off."

"Last season, it was so bad we had more cancelled games than ever before; in the last couple of years I have never seen so much rain. In fact, I would go as far to say that, I don't think we have seasons anymore - you get your cold winter mornings and a bit of snow. When I first started here, I remember coming in some mornings to six feet of snow. Since 2010, which was a bad winter where everyone was affected, the temperatures seem to be getting higher and we just suffer more with rain - which is proving to be a nightmare for many of us throughout the country."

Michael has worked closely with Mark Robertson from Agrovista Amenity for the last five years, to help provide soil samples, fertiliser programmes and more. "Mark has been great; I depend on him for advice and support, especially considering I work on my own and he's an excellent sounding board when I have a problem or query."

"When the football team played here, we had the requirement for a higher standard pitch. Mark would provide a tailor-made report based on the analytical soil samples he had taken, which helped achieve a great surface. Now, I tend to just use the Evolution mini granular range, both in spring and summer, as this works well and provides good results."

Michael talks me through the daily maintenance of the artificial and natural surfaces. "For the artificial surfaces, I have a small John Deere X series ride-on-mower, with an underslung brush attachment, which I use once a week. Every three months, a contractor, Replay Maintenance, comes in to give them a deep clean. In autumn, it's a matter of clearing up the leaves each morning. Then, in winter when it has rained heavily, I have the nightmare task of clearing up the sludge every morning from the surface of the ageing sand-filled artificial, before it can be used. The pitch is twenty years old and at the end of its life."

"To cut the grass pitches, I have a six-foot Cutlass tractor-mounted double-bladed rotary cutter. In summer, I like to cut the pitches once a week as low as possible to around 15mm - just to keep on top of it with me being by myself. In winter, I will lift the height of cut to around 20mm which, I know seems short, but it works for me. I do have a Toro Reelmaster 5010, which came from Bullocksteads, that I would like to make more use of, but it's not road legal. Therefore, I use this on the main pitch in summer, cutting at 30mm for the rugby; it provides a cleaner cut and a nice stripe. When required, I will mark out, as it can be very time consuming. If the lines are in and I can see them, I will just leave it until the time of the fixtures." 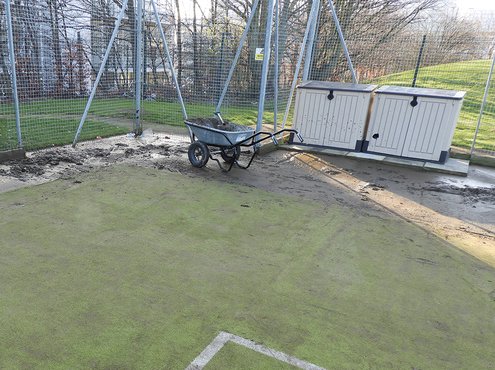 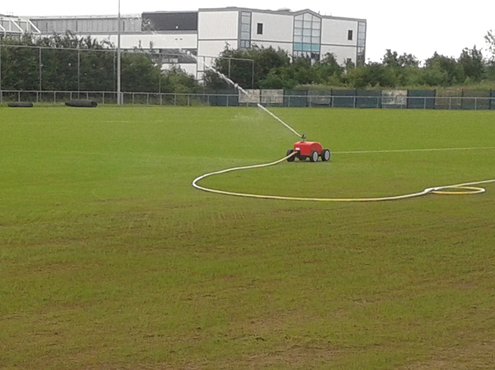 When asking Michael what piece of machinery would help him improve the surfaces, no surprise his first reaction was a new tractor, but he didn't stop there. "I'm desperate for a scarifier; it would be ideal to help keep the surface of the pitches clean. I have recently had a few demos of various machines and have been very impressed with the results. It would be great to get hold of a tractor that can power the Wiedenmann Terra-Spike. It would enable me to aerate the pitches a lot more frequently and I would not have to depend on a contractor. We also have a Blec Disc Seeder and a Redexim 800 topdresser so, if we invested in a more powerful tractor and a scarifier, we would have all the kit to carry out our own seasonal renovations. I believe this would reduce our costs in the long run and, at the same time, give more flexibility."

Michael tells me he would like to carry out more qualifications, but it is challenging to get the time when he works on his own. He has attended many IOG courses in the past, which have helped him over the years.

With Michael's thirty-five years of experience in the sports turf industry, I took the opportunity to ask him of thoughts on where we are heading. "A lot of people seem to be moving more towards 3G surfaces, but we have to remember that they still require a lot of maintenance and are only guaranteed for a number of years. Then, there is the environmental impact when the surface must be replaced and the old one discarded. In my opinion, they will never replace grass pitches and that's where local authorities and governing bodies should be investing their money." 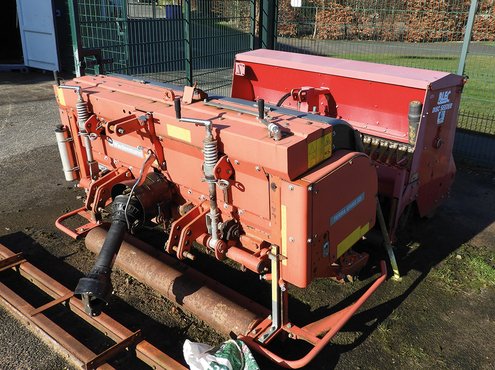 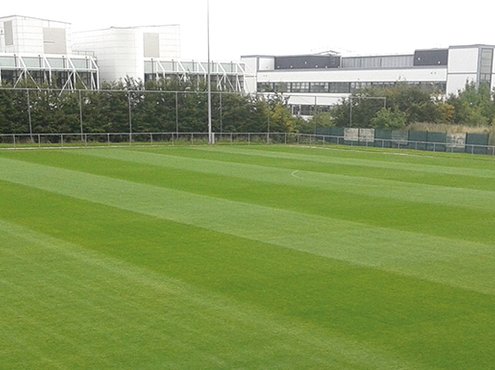