0 Trees on the Golf Course 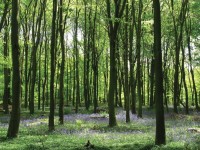 Trees can play an important role on the golf course, depending on its type; parkland courses rely heavily on trees for their landscape, whereas there will be relatively few trees on a links course.

They can provide:
• A strategic point of interest, for example at the back of a green
• An offset gateway in a fairway that golfers can play through
• Definition of a hole
• Screening between holes
• General visual impact, particularly on a parkland course.
• Ecological value
• Carbon sequestration

However, trees can also create problems for the greenkeeper. They can restrict light and airflow to the turf, slowing the speed at which moisture is removed from the surface. Dew needs to dry before golfers walk on the surface, or fungi can spread, leading to diseases such as fusarium.

Roots can spread towards, or onto, the surface of the green, risking damage to mower blades, and robbing the turf of vital water and nutrients. The greenkeeper needs to be aware that root spread can be one and a half times the size of the canopy! On heathland courses, leaf drip and shading from overhang can threaten heathers. 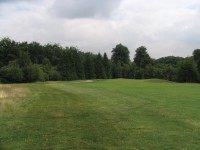 Certain trees can also be inappropriate on golf courses. Leylandii are non native and short lived with a lifespan of 30-40 years. As well as looking contrived and offering minimal wildlife value, they start to degenerate, split and can blow over after 25-30 years.

The Lombardy Poplar is another species with a short life, and matures from the inside out, so disease can't be seen from the exterior. Branches snap off and leaf and twig fall is prolific, presenting dangers to man and machinery.

So, to get the best from golf course trees, they must be managed. Alongside the greenkeeper's own skills, he may need to take advantage of specialists such as the STRI. Removing trees can be a contentious issue, but a hemispherical analysis, a technique offered by the STRI provides a quantitative route to assessing if it is necessary, e.g. by pinpointing in a non-subjective way a particular tree is causing the problem.

Where a lack of air movement is the problem, removing just one or two trees may not remedy it. By assessing where the winter sunlight is in the morning (generally to the south east, tracking south west), the ride of trees up to 40-50m long by 10-20m wide, which should be removed, can be identified.

Even if just one tree is the problem, remember that it may be home to bats, which are protected by law and can't be disturbed. A bat survey will establish whether it is possible to proceed. 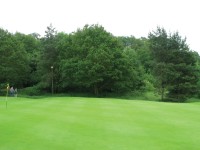 Crown lifting can successfully remove low branches and allow golfers to play from the edge of a green, as well as improving air movement.

Localised careful thinning through the understory (where young trees up to 6m high are growing through) is another useful technique, but does need supervision as the understory is an important component of the woodland structure.

While golf club members may worry about tree removal from an ecological perspective, the woodland edge supports more species than the centre, so creating rides actually encourages diversity by extending the area of woodland edge.

Dead trees have considerable ecological value, with log piles providing a home for invertebrates, fungi and even small mammals. Standing dead wood is also useful and 'weed' trees such as sycamores could be treated with bark ringing to kill the tree, leaving it in situ for maximum ecological benefit.

Greenkeepers should consider replanting too, looking at suitable sites to restock. New trees should ideally be native species, of local provenance, and planting in single species groups, possibly in multiples of three to replicate how trees seed and spread naturally. Closer planting at woodland edges than in the centre also helps to give a natural 'domed' effect to the woodland. 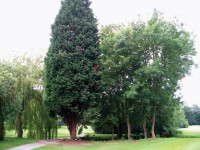 There is a wide range of species to choose from, including understory trees such as field maples, hawthorn, rowan, goat willow and holly. Tall canopy trees would include birch, Scots pine, oak and beech, whilst crab apple is another important woodland tree. Remember, that not all trees may be appropriate on all golf courses - for example, white beam drops white leaves which can make balls hard to find!

Sentinel trees can add interest, with horse chestnut, ground fir or noble fir working well, as can cedar, but remember the spreading habit of this species.

Any tree nursery can supply suitable stock, and specialists attend the major events, such as BTME, offering a good source of advice and information.

Where the ground permits, extra heavy rootball trees can be sourced from suppliers if immediate impact is needed, but remember that they need a pit one and a half to two times the size of the root ball. They also require staking and the installation of an irrigation system. 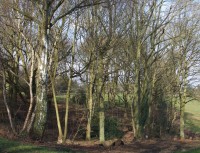 Mycorrhizal root dips can be used before the transplant is placed in a tree tube, and we have seen extremely good results with them.

Tree and hedgerow work cannot be undertaken during the nesting season from March to August but, once the autumn work is finished, provides variety and motivation for greenkeepers through the hard winter months, so bringing the work 'in house' can have advantages which are more than just financial.

While many greenkeepers will have chainsaw qualifications from their training and may have added further skills in climbing or large tree felling, a woodland management course can provide further tools for caring for golf course trees.