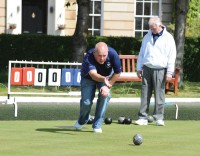 The five-year build-up to London 2012 has ensured that the Olympic Park, and the venues within it, are ready and waiting for the Games to commence. Not so surprising, then, to be looking ahead to 2014 and another spectacle of elite sport - the Commonwealth Games.

Even as we anticipate the afterglow of Team GB's medal success, planning for the second biggest athletics event in the world has already sprung out of the starting blocks, as Glasgow prepares for the show to hit town, some twenty-six years after Scotland last played host in 1986.

The Olympics may be the career high for elite competitors but, for those involved in fine turf sports, the Commonwealth Games offers a showcase for a clutch of pursuits that Britain often excels at, away from track and field.

Bowls is one such sport. Often dominated by the British nations, it is in crisis at grassroots level. Falling member numbers, a generation of youth disinterested in its seemingly low adrenalin profile, and dearth of investment, all contribute to what the game's administrators admit is a deeply worrying state of affairs.

Glasgow offers the perfect opportunity for bowls to assume centre stage before a global audience, and the game's governing body will be well into its five-year strategy for transforming the fortunes of a sport that Scotland expects its national players to deliver when it matters.

Still more than two years away from the big event, nothing less than a total reconstruction of the focus for the bowling competition is already complete and prepared for practice play.

The setting is stunning. Kelvingrove and its six lawn bowls greens lie in the lee of some of Glasgow's grandest and most beautiful buildings. This is no ultra chic architectural statement for 21st century sporting provision, but an example of sustainability many perhaps intended, in that the planners have preserved the very best of what was there - and improved on it for the modern game.

It's a strategy that looks set for success. Glasgow City Council's decision to redevelop the existing Kelvingrove Lawn Bowls Centre, and invest in making it truly world class, has already drawn praise from World Bowls, the sport's governing body, when they visited the centre last autumn.

The development comes at a time when Bowls Scotland is setting out new long-term goals to move the sport on and to help bolster member numbers nationally. The opportunity to stage the Commonwealth Games offers the newly unified governing body the perfect platform to build on its strategy, and revive passion for a sport that has played such a key role in Scottish communities for generations.

A multi-agency approach had been adopted to deliver the standards required to host the international event, led by Glasgow City Council, which brought in the skills and guidance of the likes of World Bowls, leading agronomists and experienced contractors Fairways Sportsgrounds, which won the tender to meet the council's remit.

Fairways completed the initial phase of reconstructing five of the six bowling greens at Kelvingrove late last summer. The project, delivered on behalf of Glasgow City Council, is billed as a 'signature site' of the 2014 Games.

The contractor is playing on home ground as it was company chairman, Alistair Rae, who constructed the bowls greens for the 1986 Commonwealth Games, held in Edinburgh. 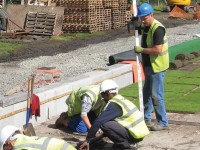 That said, Fairways could expect no preferential treatment, stresses contracts director Dave Gibson, who explains that the company had to prove, like other suppliers, that they were up to the task at hand.

"The tendering process was a tough one," he says. "The council set very high standards for what they wanted to achieve from the build, so were looking for a contractor that commanded extensive experience in bowls construction."

Fairways passed the council's pre-qualification questionnaire and were subsequently chosen from a shortlist of three others.

"Few bowls greens are being built today, so it was a really exciting project to be a part of," Dave continues, "even more so as the company had been involved the last time the Commonwealth Games came to Scotland. It's great to be part of another world sporting event here."

"We've completed many bowls reconstruction projects in the UK, and a number of full builds, but this was the biggest project of its kind for a number of years."

Five of the six bowling greens have been upgraded to international standard for use during the Commonwealth Games. Works included the complete reconstruction of greens and ditches, incorporating new drainage and automated irrigation scheme - a much needed addition for a part of the country where wet weather is all too commonplace for bowlers' liking - together with the resurfacing of the footpath network throughout the venue. For the event itself, temporary seating for some 2,500 spectators will be installed, a mark of Glasgow's confidence that the sport will deliver the mass appeal to draw in the crowds.

The green reconstruction project has now been successfully handed over to Glasgow City Council, Dave confirms, with Fairways' specialist greenkeeper, Neil Plenderleith, remaining on site to daily tend the newly laid turf up to and during the Games.

The venue's West End location is expected to prove one of the highlights of the event, given Kelvingrove's magnificent backdrop, beside the terracotta faced Kelvingrove Art Gallery and Museum, and close to the University of Glasgow. Once the centre is fully complete, it will be one of the finest of its kind in Scotland.

"Advance planning is a crucial element to staging a successful lawn bowls competition at any level," said Kenny Clark, World Bowls technical delegate for Glasgow 2014, "and, therefore, it's incredibly important for us to see the progress at Kelvingrove in regards to the organising committee and its planning for the Commonwealth Games."

Sentiments echoed by chief executive Gary Smith: "Bowls is a truly international sport, and World Bowls is based here in this country at Edinburgh. Seeing how advanced Glasgow 2014 is in their planning and preparation, we are confident it will stage the best lawn bowls competition the Commonwealth has ever seen."

A glowing vote of confidence, yet for Gibson the real test will be in the reaction during and after the Games, when his work will come under greatest scrutiny. No pressure then!

"The existing site was very much an old-style bowls facility, built on a clinker and ash base. We needed better-draining foundations, so had to rip out the clinker base, put in a new site-wide drainage system, then lay new greens on top. It was pretty much a complete overhaul," says Dave.

"First, we removed the topsoil and recycled it, supplying several local golf courses in the city. We had to regrade the sub-base before putting in the new drainage, which was installed at 100mm laterals laid at 6.5m centres - a standard bowls set-up."

A 150mm thick gravel raft was then installed, overlaid with a 200mm layer of rootzone, before inserting concrete ditch channelling units, which would allow water to drain to an external location. 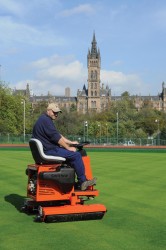 Next went in a fully automated Rainbird irrigation system, with eight sprinklers per green - four at each corner and one in the middle. "We added retaining wall features to tie the whole thing together and allow good public access around the greens," Dave adds.

The bulk of the construction work drew to a close last summer, with the individually selected turf chosen to complete the job. Fine turf consultancy, Professional Sportsturf Design Scotland, were brought on board to select the most appropriate grass varieties for the task. A fescue bent mix was grown at the Sports Turf Research Institute in Bingley and specifically selected to meet the requirement of the city location.

The remaining green allowed play to continue whilst the other five were being rebuilt, Dave explains, and will not be fully renovated, but left as it is after the Games close.

Dave and his team are responsible for all the continuing maintenance of the greens up to and including 2014, after which, the work will be handed over to Glasgow City Council.

"For now, it's a matter of keeping it ticking over until the Games get underway," adds Dave, "with the council hoping to stage some play at the back-end of the 2012 season, and the first trial matches likely to commence in 2013, a year before the first match of the Commonwealth Games."

Positive news stories have not been in abundance for bowls of late, with more focus being on the decline of the sport and the ever-falling number of functional greens available in the UK. The next year or two could see the beginnings of a rebirth for bowls as Bowls Scotland's five-year strategy matures, reinforced by the Kelvingrove redevelopment and the world focus that will shine on it during the Games.

With a little over thirty months until Glasgow 2014, the backbone of the work is done and a prolonged mild period has helped Fairways' cause. "We've had little to do over the winter and, with so little growth on the greens, not much in the way of cutting has been needed.

"As temperatures rise, we'll begin to cut more frequently than our current six-weekly intervals. But, the schedule might yet be subject to further change if we suffer the cold snap expected through February."

The only challenge facing the team over the winter was clearing debris from storm damage that hit the city at the back end of last year.

Although the construction phases ran largely problem free, the only issues of note that arose were the site's space constraints and the logistics of laying the turf, Dave recalls.

"The fact that we had to work in a very tight space meant that all materials and turf had to come in from the one narrow entrance. This meant we had to use the unturfed greens as a storage area while we were working."

"This wasn't ideal, as you cannot leave large amounts of turf lying around for lengthy periods in dry conditions, so we had to work quickly, and the irrigation system was pretty much running non stop through the summer months."

But, as the air of expectation among Scotland's bowlers and its governing body mounts, the hope is that 2014, will do for bowls what the Beijing Olympics did for swimming.

A tidy medal haul will highlight Britain's eminence in bowls, and could inject enthusiasm into a new generation of players, as world-class competition is played out in a location that surely cannot fail to inspire all who witness it.